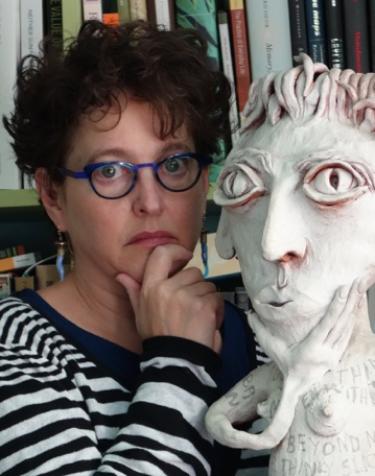 Karen Jacobs received her BA from Washington University (1982) and her PhD from the University of California, Berkeley (1993). Dr. Jacobs specializes in twentieth-century and contemporary American literature, visual culture studies, and critical theory. She is the new editor of the journal Genders Future Tense. She is the author of The Eye’s Mind: Literary Modernism and Visual Culture (Cornell 2001); the editor of the English Language Notes special issue, Photography and Literature (2006), and Imaginary Cartographies(2014); and the editor of a translation of French critic Liliane Louvel’s Poetics of the Iconotext (Ashgate 2011). She has also written on queer theory, collective memory, and public art. She is currently completing two books: Afterimages: Nabokov • Sebald • Cole; and Trace Atlas: Itineraries of Postmodern Literary Space, for which she recently won an NEH. In Summer 2014 she received the Andrew J. Kappel Prize in Literary Criticism for her article “Sebald’s Apparitional Nabokov,” which appears in the journal Twentieth-Century Literature.