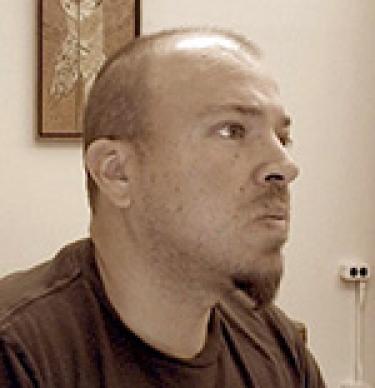 Professor • Director of the Program for Writing & Rhetoric
john-michael.rivera@colorado.edu
303-492-8188

John-Michael Rivera is an Associate Professor English and Director of the Program for Writing and Rhetoric and also a fellow of the W.R.I.T.E (Writing, Rhetoric, Information, Technology and Environment) LAB.  He works in Latinx literature and culture, American Ethnic Literatures, 18th and 19th century American Literature, Creative Nonfiction, Documentality and Information studies, Poetics, and Experimental and Cross-Genre writing.   His first book, The Emergence of Mexican America (NYU 2007), won the Thomas J. Lyon Award for best book in Cultural Studies.   He has also edited and translated a number of other books.  He was the co-editor and founder of Shadowbox Magazine, and curator of El Laboratorio. His recent creative work can be read in Puerto del Sol; New Latino Writers; Defunct; Breech; The LAB Innovative Poets Exhibition; Palabra; SienundWerden; Eclectica Magazine; XCP=Cross Cultural Poetics; Pilgrimage; Mandorola; Phi Beta Phi; Journal of American Studies.  His new book UNDOCUMENTS (Arizona UP) will be out in 2021, and he is working on a cross-genre book, entitled, Bordered Time, which explores the chronopoetics of borders and containment.