One particular highlight of the English Department at CU Boulder can be found in the varied cross-disciplinary research of its faculty members. From American and British literature to creative writing to popular culture, film, and digital media, faculty specialties provide a hybrid of traditional and experimental instruction that allows students to explore many pathways during their degrees. 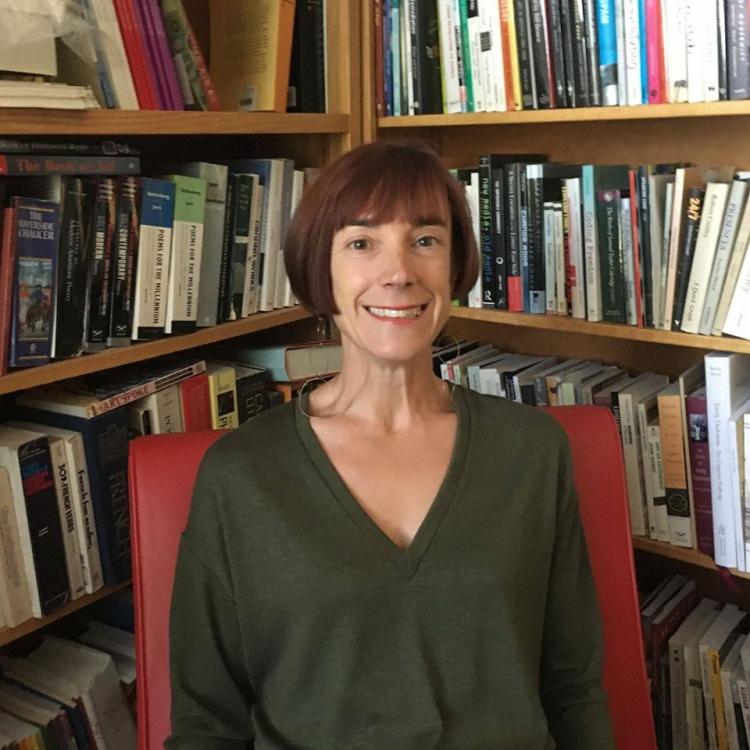 Dr. Lori Emerson, Associate Chair for Graduate Studies for the College of Media, Communication and Information, Professor of English, and founding director of the Media Archaeology Lab, is one of those who tightly intertwines her research with classroom instruction.

Emerson, originally from Brentwood Bay on Vancouver Island, Canada, was hired at CU Boulder in 2008. In 2009, she founded the Media Archaeology Lab (MAL) on campus.

The MAL, different than other digital media labs that use the most up-to-date technology and tools available, is a center for “cross-disciplinary experimental research and teaching using still functioning media from the past.” With 35 portables/laptops, 73 desktop computers, 22 handheld devices, 8 other computing devices, and 10 gaming consoles, the MAL offers a wide special glimpse into history.

“The MAL is propelled equally by the need to both preserve and maintain access to historically important media of all kinds—from magic lanterns, projectors, and typewriters to personal computers from the 1970s through the 1990s, as well as early works of digital literature/art which were created on the hardware/software housed in the lab.”

Emerson had the support of John Bennett, the past director of the Alliance for Technology, Learning, and Society, from the time she began her CU career. He offered her a small startup grant to build a lab that Atlas and English Department students could both use. “The relative obscurity of the lab in those early years meant that we had little to no oversight, no one to report to, no metrics or outcomes to adhere to, and so on which meant we were free to be as wild as we wanted.”

Eleven years later, the MAL and CU Boulder are deeply connected. So much so that Emerson admits her teaching and research have always been tightly intertwined with the MAL “to the point where I can't imagine how I would do either if for some reason the MAL closed!”

“I regularly bring my students to the lab to try out, for example, outdated word processing programs to help defamiliarize the ubiquitous Microsoft Word; or I show my students alternative networks to the internet such as mesh networks, etc. In terms of my graduate classes, I regularly teach a class called "The Theory and Practice of Doing" that students from across campus take to learn the long history of hands-on work in a lab setting as well as a sophisticated theoretical basis by which to understand the 21st century proliferation of labs and the related celebration of making, doing, and tinkering in an arts/humanities context.”

While the MAL is open to all members of the general public, it remains a staple to the CU Boulder community. Many of the volunteers available during open house hours are graduate students from many departments on campus, English included. These students help develop class assignments, activities, workshops, and lab tours for around 18 different classes on campus. The MAL has an average visitation of 200 students during the peak weeks of the school year!

Emerson’s latest project, THE LAB BOOK: Situated Practices in Media Studies, is a collaborative book project with Jussi Parikka and Darren Wershler that is in its final stages for publication with the University of Minnesota Press. The project details the history of labs that spans 600 years and a nearly unlimited range of subjects. “But somehow, we persevered, and I am so thrilled (and relieved) this book should be out in the world in spring 2021.”

When asked about what makes her proudest about the MAL, Emerson provides beautiful insight on the sense of community that CU Boulder prides itself on: “Seven or eight years ago, I would have said that I'm proud of how large the MAL collection is or about how proud I am of how it's a thoroughly experimental and playful entity that has managed to thrive over so many years. But now what I'm most proud of is the community that's grown up around the MAL - somehow, with the help and energy of so many students and volunteers, the lab has become a profoundly welcoming and even safe space to anyone and everyone with even a slight interest in media.”

“The lab would be nothing without its collection but really, at the end of the day what makes it valuable and cherished are the people and the way the collection facilitates relationships between and among people.”

For more information about the Media Archaeology Lab, please visit their website.

*Since this article was written, the MAL recieved a $100,000 donation from local tech author and entrepeneur Brad Feld.