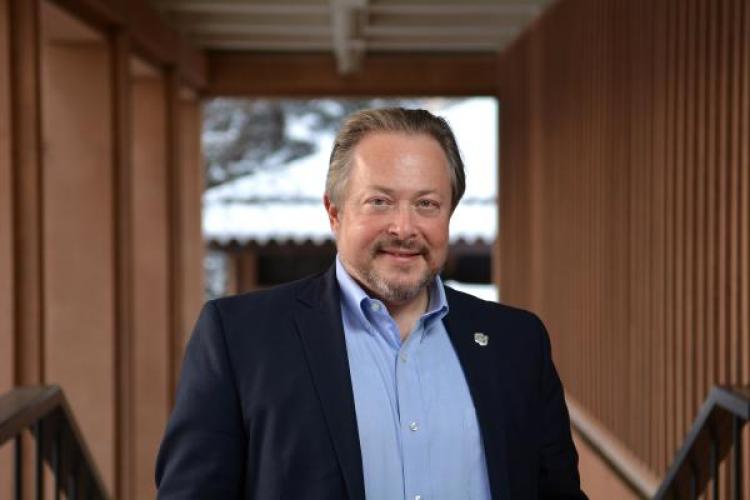 It is no secret that many of the English Department’s faculty juggle a myriad of roles – teaching being the obvious – but also developing and improving curriculum, mentoring student organizations, serving on student thesis committees, and working on cross-disciplinary programs to bridge divides in the humanities, just to name a few. Our professors also have a real knack for success in administrative roles at the university, including Dr. William Kuskin who has recently returned to teaching in addition to his administrative work.

Kuskin, full professor of English, the Faculty Director for Online Innovation in CEAS, and the Faculty Associate for the Office of Global Engagement in the Provost’s Office, began his career at CU Boulder in 2006. Since then, he has served as Associate Chair for Undergraduate Studies and as Chair of the English Department. Prior to accepting his current position at CU, he was tenure-track faculty at the University of Southern Mississippi, where he served as Chair of their English Department when Hurricane Katrina hit.

Kuskin’s journey from regular faculty to Chair of the department at CU Boulder caught the Provost’s eye and William was personally invited to work on new academic initiatives. “When I began at the Provost’s Office, the Provost had not begun the process of change he has embarked upon now—academic futures and financial futures, specifically. He pulled me in to initiate change in a very ad hoc fashion. I embarked upon a number of startup projects and engaged in great discussions with the Provost and Chancellor directly.” He worked his way through a few different administrative positions before ultimately landing at Vice Provost and Associate Vice Chancellor for Academic Innovation. “Great leadership, like great teaching, is fundamentally inclusive: it respects all voices and allows each individual to contribute according to his, hers, or their unique gifts,” he ruminated.

The decision to return to teaching, he says, was one made to “get back in touch with the basics of teaching and writing, to recharge my creativity for the next generation of change.”

“Ultimately, the university is about changing the world for the better, and that’s as true of administration as teaching. Great leadership leads the way, and it does this through creating empowering relationships that allow people to be creative. So, the best administrators, in my view, bring the energy of the classroom to the meeting room.”

Kuskin’s areas of specialties include literary theory, medieval literature, popular culture and digital media, and renaissance literature. He is well known on campus for his courses taught on comics for English majors and nonmajors. He is looking to develop the Comics course in a number of ways—a study guide, an online version, a massive online version, and eventually a certificate. His proudest professional accomplishment, he noted, is his 2013 Massive Open Online Course, Comic Books and Graphic Novels. “That course served somewhere around 78k students, and changed my thinking about my own role as a teacher.”

When asked about the challenges he expects to face returning to the classroom, William was candidly truthful about the modern classroom: “Holy Corrosion, Batman, I’m rusty! Honestly, for the past five years the only thing I’ve read is email and the longest thing I’ve written is a memo! My jokes are going to be really stale, and the students are going to know more about comics and graphic novels than I do. The one thing that comforts me is that I’ve always believed teaching is a tremendously organic process. It takes shape in the room. It is forgiving of mistakes and generative of ideas. So, although I am sure I will botch things up wholesale, I am hopeful that my students will help me get on course and we will roll along.” Onward!