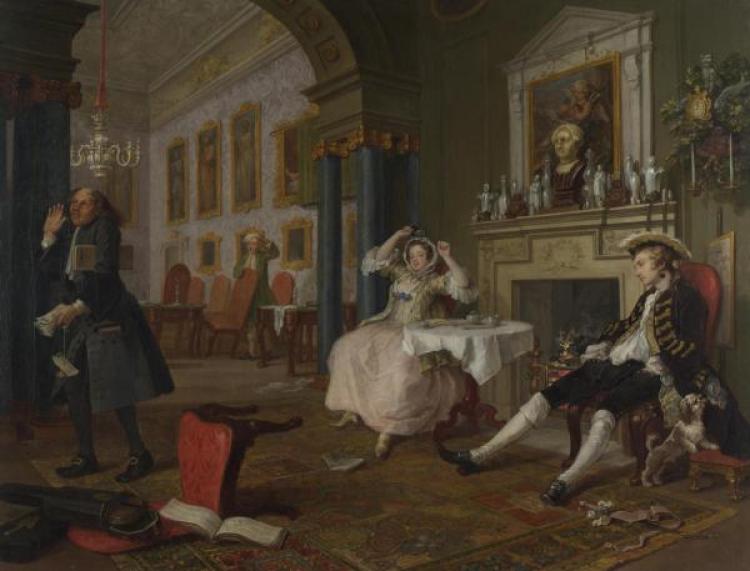 In 1706 and 1707 the parliaments of England and Scotland ratified Acts of Union that gave birth to the Kingdom of Great Britain. Partly as a result, the Georgian era, named after the reigns of Georges I–IV (1714–1830), was a period of staggering political, economic, social, intellectual, and artistic transformations, during which Britain became a modern nation and an industrial and imperial superpower.

In this course we shall study some of the literary and visual works that shaped and responded to the tumultuous history of the eighteenth century. In particular, we shall pay attention to the ways in which writers and artists used a wide range of forms, from satirical prints to philosophical essays, political poems, and sentimental novels to redefine what it means to be human: Is it our capacity to reason and feel? To trade and own things? To be free?

In particular, we shall study how they made sense of a wide range of sometimes contradictory phenomena, including:

We shall also ask how “Britishness” came to be defined in the eighteenth century, especially in relation to English, Irish, Scottish, European identities, a phenomenon that will help us better understand some of the issues surrounding Brexit, that is, the decision to leave the European Union.

We shall study works by such authors as Daniel Defoe, Jonathan Swift, Olaudah Equiano, William Blake, Mary Wollstonecraft, and Jane Austen alongside a wide range of works of art, from paintings by Thomas Gainsborough, Joseph Wright of Derby,  and J.M.W. Turner to pottery by Josiah Wedgwood.  In particular, we shall take advantage of the CU Art Museum’s extensive collection of prints by William Hogarth to explore how this London artist, writer, businessman, and philanthropist represented the world around him in wonderfully detailed satirical and other prints, some of which are often seen as precursors to modern comics.