Behind the movement: Doctoral candidate contributes to organizing and Georgia’s historic voter turnout 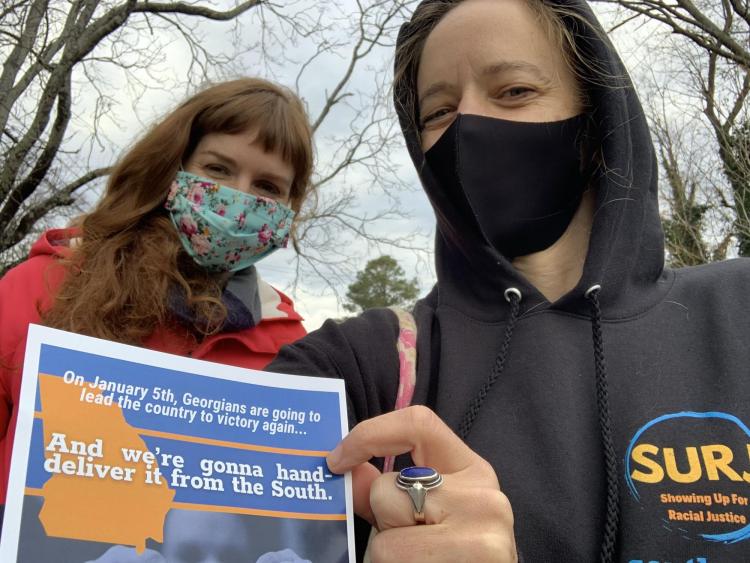 Last month, all eyes were on the state of Georgia as voter turnout reached historic levels during two runoff Senate elections following record turnout in November. Julia Daniel, a doctoral candidate in Educational Foundations, Policy and Practice in the CU Boulder School of Education, was one of the many organizers who dropped everything to focus on electoral organizing efforts in November and again leading up to the runoff election.

The runoff race resulted in the election of two new U.S. senators who have not previously held public office: Raphael Warnock, the state’s first Black senator and a long-time community activist who is a pastor in Martin Luther King, Jr.’s former church, and Jon Ossoff, now the senate’s youngest senator and a one-time intern for the late civil rights leader Rep. John Lewis.

As interim assistant director for Showing Up for Racial Justice (SURJ), a multi-racial national movement working to undermine white supremacy and work for racial justice, Daniel worked with colleagues and volunteers to mobilize largely working class, white voters in solidarity with the impressive voter mobilization efforts led by local BIPOC (Black, Indigenous and people of color) leaders and communities of color.

“At SURJ, we see our role in building multi-racial movements for economic and racial justice by moving folks in poor and working-class majority white communities into understanding that they have a mutual interest in ending white supremacy,” she said. “Electoral organizing is a piece of that, as it can contribute to long-term organizing between elections as well.”

After the November election, SURJ leaders re-engaged with all the volunteers who made phone calls and knocked on doors for the 2020 election and also invited Georgia folks who they had connected with to become involved in the Senate runoff races. Over six weeks, they made nearly 700,000 calls and spoke with 32,600 people about their lives. Daniel coordinated door-knocking efforts to safely visit residents in mostly rural areas of Georgia, and the team knocked on nearly 30,000 doors.

We are in a lot of trouble as a country and as a world, and until we who consider ourselves white can reckon with our past, shed our shame, and roll up our sleeves to build multi-racial movements through organizing our own, we will continue to rely on Black folks to ‘save us,’ which is both horribly unjust and strategically foolish."

“I was lucky enough to have some great conversations with people living in rural parts of Northern Georgia who had strong progressive leanings but hadn’t ever been visited by the Democratic party, which has largely abandoned those areas,” she said. “People were often willing to talk with someone about issues they saw, the exploits of the wealthy in their communities, and ways that they could stay involved with us after the elections.”

With support from her faculty advisors, Terrenda White and Kevin Welner, Daniel put her doctoral dissertation work on pause to assist in these efforts and lean into her role with SURJ, pronounced surge, which uses “community organizing, mobilizing, and education to move white people to act as part of a multi-racial majority for justice with passion and accountability.”

Daniel’s work has often centered on racial justice movements and community organizing efforts — as a one-time organizer working with youth in Miami to end the school-to-prison pipeline and later when she helped co-found the SURJ chapter in Boulder as a PhD student.

“I was very lucky that my advisors understood the importance of being able to step back and dedicate more of my time to this work,” she said. “Because they understand that collective organizing is a combination of long-term building work and being responsive to the moment, they saw the importance of helping me respond to the moment.”

Organizers, she said, are always in touch with the base of people that they are organizing with so that they know what moments they can build on and what requires action. Building multi-racial movements toward racial justice requires creating long-term coalitions of people, who can critically analyze the systems that oppress them. Daniel learned a lot from her conversations with rural, white residents in Georgia, and we have a lot to learn from their perspectives, the perspectives and lived experiences of people of color, and the sweeping voter activism, largely led by Black women, in 2020-2021 and long before.

“The key lesson from Georgia is that we have to do the work,” Daniel said.

When she talks about work, she is challenging us to organize, talking with other people to move more of us into action. “Black women have been carrying this country since its founding, doing reproductive and care labor in the most exploited of conditions under slavery and since, while being scapegoated and used by a white supremacist and misogynist culture to ensure white allegiance to regressive political programs. Yet they continue to organize and vote in ways that save us all from the worst of white nationalism.”

Daniel encourages all of us to follow their lead and do our part, “including by moving white folks in the South or rural areas who have been written off as too conservative or uneducated to believe in progressive politics. The stereotypes of poor white people in popular media perpetuate white supremacy by discouraging us who consider ourselves white from engaging with them about their conditions and how to make changes.

“We are in a lot of trouble as a country and as a world, and until we who consider ourselves white can reckon with our past, shed our shame, and roll up our sleeves to build multi-racial movements through organizing our own, we will continue to rely on Black folks to ‘save us,’ which is both horribly unjust and strategically foolish.”