One Step at a Time

One Step at a Time

Christine Ahn awoke from a vivid dream in 2009 and exclaimed, “I know who will end the Korean War: It will be women.” Six years later, she and fellow leaders were taking steps toward her dream by organizing a women’s peace walk across the most militarized border in the world, the demilitarized zone (DMZ) between North and South Korea. The peaceful demonstration cast new light on the Korean Peninsula, an international focal point since the unresolved Korean War. Not long after Ahn and advocates made headlines, she returned to CU Boulder as an INVST Community Studies alumna to talk with students about organizing peace and humanitarian delegations. From the Olympics to missile tests to peace deals, Korea has once again been in focus. With our school’s community leadership programs thriving, this is a critical time to revisit Ahn’s important work and words.

Known as “the Forgotten War,” the Korean War was brutal. In just three years, nearly 4 million people were killed—mostly innocent civilians. The U.S. bombing campaign destroyed nearly 80 percent of the North. Just one year into the war, a U.S. general told the Senate “there are no more targets, everything is destroyed.” The fighting came to a halt when North Korea, China and the U.S., representing the U.N. Command, signed the 1953 armistice agreement. They promised to return in 90 days to hammer out a peace deal, but the peace deal went unsigned for more than 60 years. 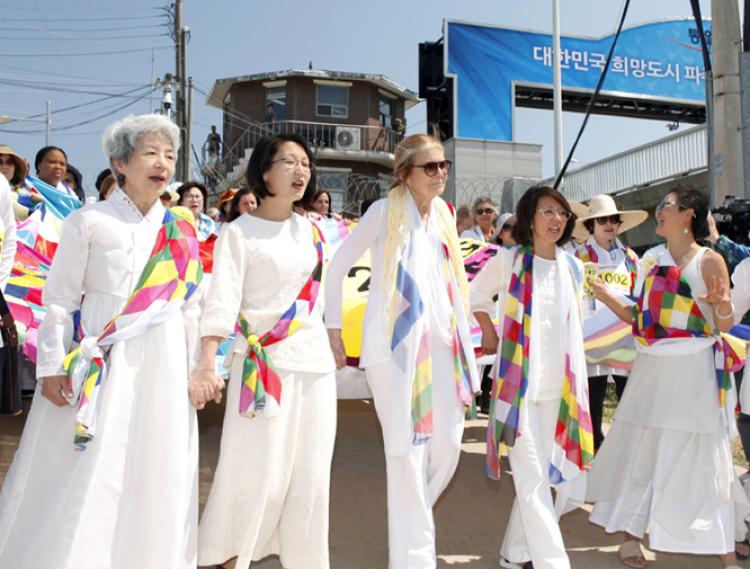 One of the legacies of the ceasefire is the 2-mile-wide DMZ, established as a buttress between the two Koreas. With 1.2 million landmines, thousands of armed soldiers and barbed wire, the DMZ is intended to keep families separated and the Korean people from seeing, knowing and understanding each other.

On the 70th anniversary of Korea’s division, it seemed appropriate to do something bold that shook the status quo and shined a light on the insanity of this division. The women’s peace walk across the DMZ was just that.

The idea emerged from a dream. I was working at the Global Fund for Women at the time and managing a program called Women Dismantling Militarism, which supported hundreds of inspiring grassroots women’s efforts worldwide—from Colombia to Congo—to challenge war and militarism. It was then I had the most incredible dream about the Imjin River, which flows through the heart of the Korean Peninsula, that led to my planning and organizing of the walk.

"It was before the break of dawn, and I was wading in the river, chest high. As the sun rose over the horizon, a glow of light gently flowed down the river. It was people carrying candles in their palms, and that light then morphed into the most beautiful family reunifications, of elderly siblings clutching brothers and sisters they had not seen for a lifetime."

"I remember being moved to tears but wanting to keep going upriver to the source of the light. So I waded up the river, and that’s when I came upon a circle of women."

I began ruminating about how women will do this. I received a fellowship to research the efforts of Korean women to build peace. I learned the first meeting of North and South was convened by a Japanese woman, which drove home the important role of women from outside the peninsula during times of inter-Korean impasse. Then I found inspiration for a peace walk when five New Zealanders crossed the DMZ by motorbike. I thought, ‘If they can do it, we can, too.’ I set off to make this dream come true. 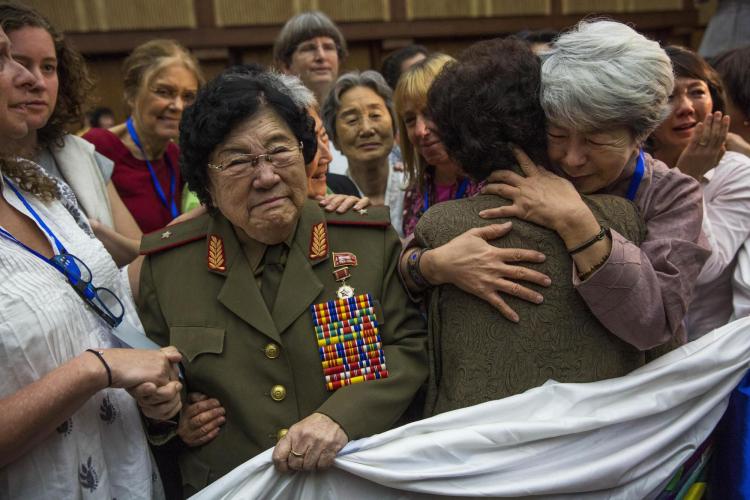 Why did we walk? To invite all concerned to imagine a new chapter in Korean history, one marked by dialogue, understanding and, ultimately, forgiveness. We walked to help unite Korean families tragically separated by a man-made division. We walked to reduce military tensions on the Korean Peninsula, which have ramifications for peace and security throughout the world. We walked to urge our leaders to redirect funds devoted to armaments toward improving people's welfare and protecting the environment. We walked to end the Korean War by replacing the armistice agreement with a peace treaty. And we're going to continue walking to ensure that women are involved at all levels of the peace-building process.
Categories: 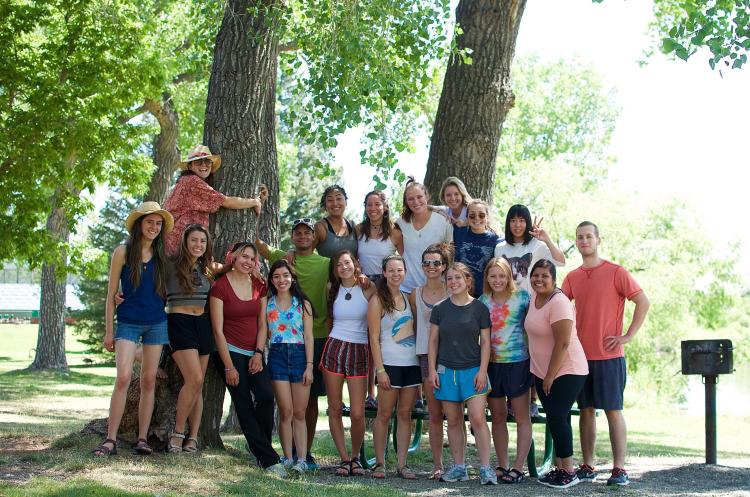 Since 1990, INVST Community Studies has been developing CU Boulder students into engaged citizens and leaders who work for the benefit of humanity and the environment. INVST is one of the programs under CU Engage, which is dedicated to fostering equity and inclusion; reciprocity; public impact; and democracy. 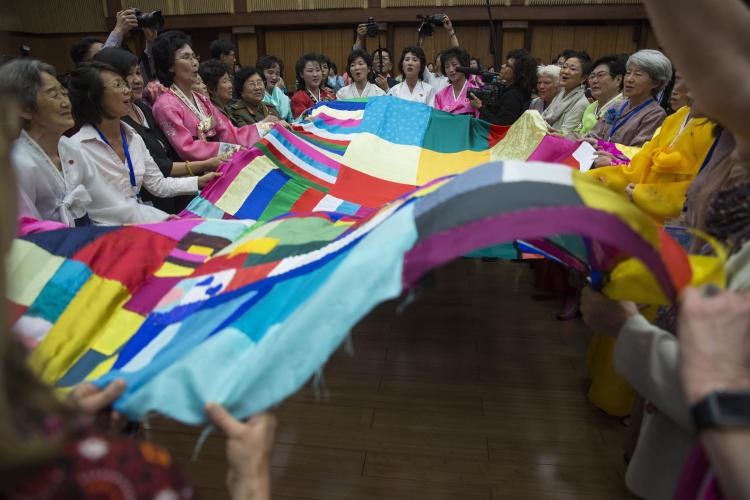 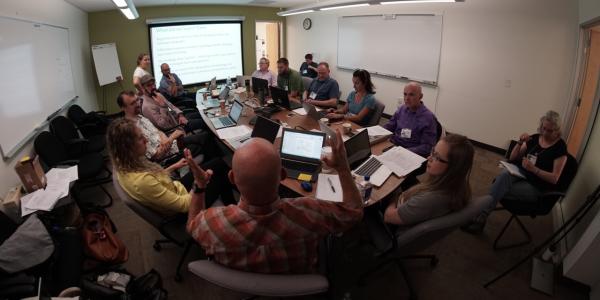 Growing a Movement for Research-Practice Partnerships By Bill Penuel , professor of learning sciences and... END_OF_DOCUMENT_TOKEN_TO_BE_REPLACED 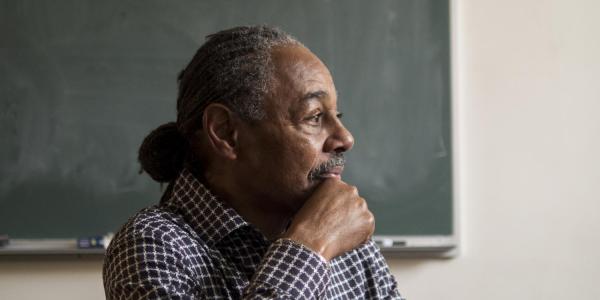 How a musical ’60s activist became a champion of education. Tom Windham, a longtime supporter of the School of Education, shares his passion for pushing public education to a higher priority, and his advice for students. “I’ve learned to believe even when it’s dark that the sun’s going to rise, and when it does, that new horizon is going to offer incredible opportunities." END_OF_DOCUMENT_TOKEN_TO_BE_REPLACED 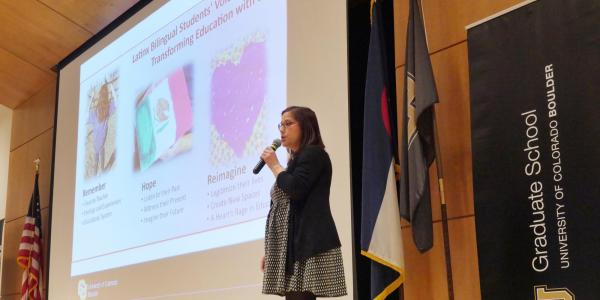 When Carolina Bañuelos was in fourth grade, she took second place in a citywide Colorado... END_OF_DOCUMENT_TOKEN_TO_BE_REPLACED