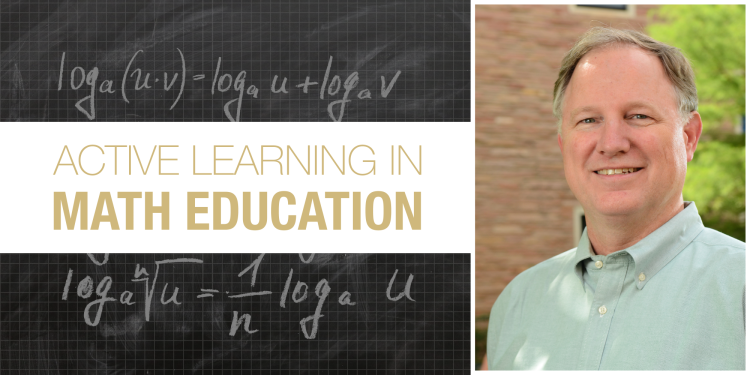 David Webb, associate professor at the School of Education

In an effort to help undergraduate students pursuing STEM degrees succeed in introductory mathematics courses, University of Colorado Boulder and 11 other universities joined the Association of Public and Land-grant Universities (APLU) in a five-year grant aimed to support the adoption of active learning for undergraduate pre-calculus and calculus instruction.

School of Education Associate Professor David Webb, along with Robert Tubbs and David Grant from the CU Boulder Department of Mathematics, worked on this grant as co-principal investigators.

Over the past year, CU Boulder has worked with APLU alongside San Diego State University and University of Nebraska-Lincoln in championing the use of active learning in introductory mathematics instruction with great success.

As defined by the APLU, active learning in mathematics involves teaching methods that promote students’ deep engagement in mathematical reasoning, peer-to-peer interaction and instructor interest in and use of student thinking.

“This work at University of Colorado began years ago largely due to the vision and leadership of the mathematics faculty and department leaders who initiated and supported several changes in the instruction of calculus courses,” said Webb.

Due to the success of the three initial universities, APLU invited nine universities to join in on the grant. CU Boulder will act as a partner to the new universities across the country in supporting and studying the changes within the math departments. School of Education PhD student Nancy Kress will support CU faculty in this process to identify which methods for implementing active learning for mathematics work best at different types of schools.

Introductory math courses are foundational to success in science, technology, engineering and math (STEM) majors and fields and active learning has proven highly effective in helping more students succeed in such courses. The largest study of undergraduate STEM education literature to date – a meta-analysis of 225 studies published by the National Academies in 2014 – found that undergraduate students in classes using active learning methods had higher course grades by half a letter grade, and students in classes with traditional lectures were 1.5 times more likely to fail.

In a study in 2015 led by Sandra Laursen, the co-director of the Ethnography and Evaluation Research group at CU Boulder, results showed that pre-service teachers taking mathematics courses benefited from active learning concepts.

At CU Boulder in the last year, Webb said that he has noticed a decrease in the drop/fail/withdraw rate and an increase in persistence among students in the calculus sequence.

The National Science Foundation (NSF) is supporting the project, known as SEMINAL: Student Engagement in Mathematics through an Institutional Network for Active Learning, with a $3 million, five-year grant. The initiative will place a particular emphasis on helping underrepresented minority students succeed in introductory math courses that are foundational in STEM fields.