Kevin Welner and Bill Mathis, of the University of Colorado Boulder’s National Education Policy (NEPC), have been named the national Outstanding Public Educators by the Horace Mann League. 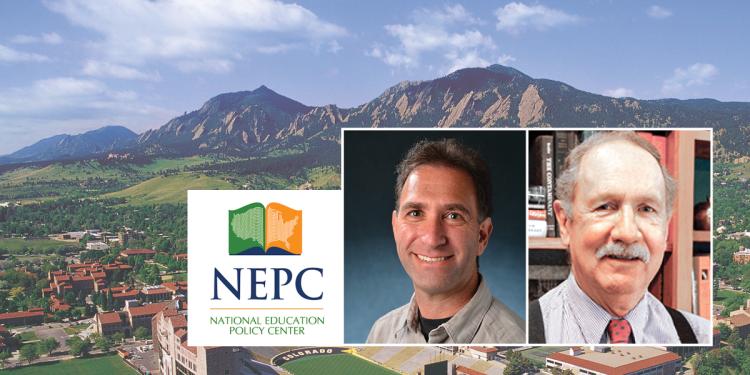 The awards will be presented on Friday, Feb. 16 in Nashville in conjunction with the national conference of the American Association of School Administrators.


Welner is a professor of educational foundations, policy and practices in the CU Boulder School of Education and director of NEPC. The center works to bridge the divide between researchers and the broader public. Welner has authored or edited 12 books and more than 100 articles and book chapters concerning education policy and law. He helped create NEPC’s “Schools of Opportunity” project, which honors high schools that use research-based practices to close opportunity gaps. The project is based on his 2013 book, “Closing the Opportunity Gap.”

Mathis is the managing director of NEPC and the former superintendent of schools for the Rutland Northeast Supervisory Union in Brandon, Vermont. He was a National Superintendent of the Year finalist and a Vermont Superintendent of the Year. To increase equity, he has worked on various state finance systems around the nation. In addition to popular columns, he has published or presented research on finance, assessment, accountability, standards, school vouchers and Constitutional issues.

“We are so pleased about this award that affirms the fine work of these two scholars and the National Education Policy Center,” said Kathy Schultz, Dean of the CU Boulder School of Education. “The quality of Mathis’ and Welner’s work is widely respected and is a key factor in the School of Education’s recognition as a national hub for cutting-edge public scholarship and educational policy research. In receiving this honor, they join some of the nation’s finest public-minded scholars, including David Berliner, Michael Kirst, and Linda Darling-Hammond. This is particularly exciting because it comes only two years after our research professor, Gene Glass, was given this same honor.”

Mathis reacted to the news by pointing to the continued, invaluable work of those in public schools nationwide.

“It is certainly humbling for me and Kevin to even be considered in the company of the illustrious earlier recipients of this award,” Mathis said. “Our work at NEPC is important, but it’s the continued work of the nation’s 3.1 million public educators that will see us through to a firmer and stronger democracy. That’s the nature of our collective work.”

Welner added he considers this a “group accolade” on behalf of all the NEPC researchers and fellows and in partnership with public educators nationwide.

“This terrific award recognizes my work and Bill’s work, but it also recognizes the amazing group of colleagues, staff and doctoral students that we have had the honor and privilege of working with throughout the years—NEPC’s co-founder Alex Molnar foremost among them,” he said.

Founded in 1922, the Horace Mann League is named in honor of Horace Mann, considered the founder of public education. The league’s purpose is to strengthen our public schools, and its members believe that the U.S. public school system is an indispensable agency for strengthening the ideals of our democracy and the most necessary unifying and dynamic influence in American life.