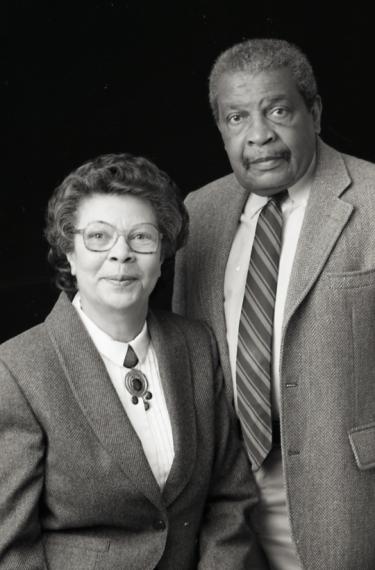 Tom Windham still remembers meeting Mildred Nilon in the summer of ‘69. She stopped him in the stacks of Norlin Library and wanted to know about him — where was he from, what was he studying, what were his goals. That was the thing about Charles and Mildred Nilon, Windham explained. They went above and beyond their roles on campus to support students and community. As the university’s first black professor and first black librarian, respectively, they helped inspire countless students and colleagues and challenge the status quo on campus and in the community.


Charles passed away 1991, and Mildred recently passed away on Sept. 30 at the age of 97. However, their legacy and education advocacy will live on through a new education scholarship created in their honor, the Charles and Mildred Nilon Endowed Teacher Education Scholarship. The scholarship was awarded for the first time this fall to two students pursuing a bachelor’s of elementary education.

“The Nilons had a way of connecting with students,” said Windham, a CU Boulder alumnus (PhD, Psych ’75) and a School of Education Development Advisory Board Member. “When they saw you, they really saw you. They wanted you to know that just by being who you are, you deserved respect and opportunity.”

Charles Nilon joined the English Department in 1956 and Mildred Nilon joined the library in 1962. Among their many important contributions, Charles spearheaded and served the chairperson for the university’s Black Studies program that became part of the current Department of Ethnic Studies, and Mildred retired as the head of the library’s public service division after 25 years. They were active on and off campus in groups such as the United Black Action Committee, the United Black Women of Boulder Valley, Housing for Everyone through Local Programs (HELP), the Town and Country YWCA Board, the Mental Health Board, and Historic Boulder. Together, they were beloved members of the CU Boulder community who also effectively began a change in Boulder’s segregated housing pattern.

Windham, a friend and mentee of the Nilons, helped lead efforts to honor the Nilons by creating the new scholarship and many donors across the country have stepped up to show their support. The scholarship is designated for education students who are pursuing teacher licensure and are committed to advancing educational opportunities in under-resourced schools, especially those that serve African American communities. The Nilons’ son, Charlie, a professor at the University of Missouri, said his mother was “thrilled” that a scholarship had been created in their honor. Charlie said his mother often remarked that she had one son but many children. With the new Nilon scholarship underway, there will be many more “children” who thrive personally and advance educational opportunities for their own students for many generations to come.

Help us ensure the Nilon Scholarship can continue to support students and educational equity for years to come. Give now