Here they come to save the day: After school club evokes the superheroes within 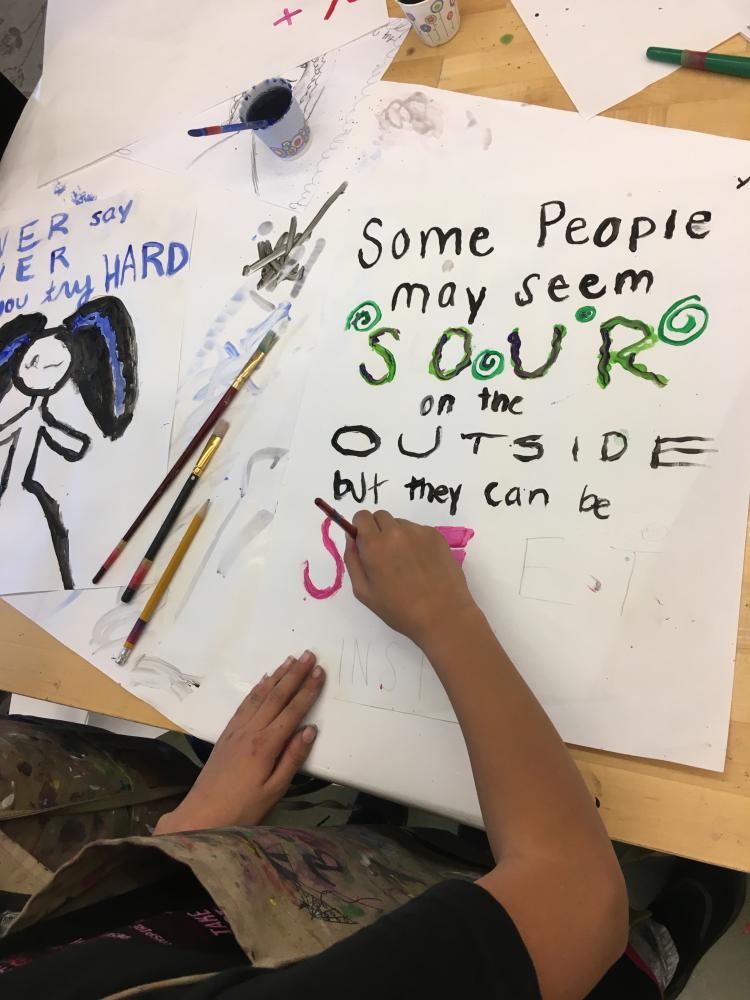 In brightly colored paints and youthful script, the poster reads: “You don’t need a costume and you don’t need special powers.” It’s a superhero’s motto that rings true no matter your age.

The poster and motto were created by Jose, a student in an after school club called El Pueblo Innovation Club, or EPIC, an ongoing partnership that began six years ago between the CU Boulder School of Education and Alicia Sanchez International Elementary School in Lafayette. Third-fifth grade students from Sanchez work with CU Boulder education students from the EDUC 441, Educational Psychology for Elementary Schools, course as partners on a variety of long-term projects. Supported by a CU Boulder outreach award, the club serves as a critical space in which children and adults from different racial, class, and linguistic backgrounds can interpret and re-imagine their roles as learners and teachers. Together, the Sanchez and CU partners engage in interest-driven design projects that utilize play, literacy, technology, and problem-solving. The projects, developed by a team of faculty and doctoral and undergraduate students, aim to support inquiry into issues that relate to social justice and equity.

This semester brought out the inner superhero in all students. The doctoral students leading the club on superhero day, Kelsey Tayne and Francisco Torres, introduced a unit modeled after activities that Torres has used to critically engage youth in taking up issues of social justice through play. With Tayne, they expanded the unit to invite students to look for superheroes and villains represented in larger society, and create original superheroes and villains to make sense of the current political climate in particular. CU and Sanchez partners designed gadgets, storyboards, videos, and superhero mottos that represented their commitment to fighting for justice even in trying times.

“The kids at our club really understand the world around them,” said Susan Jurow, associate professor of Learning Sciences and Human Development and the Director of EPIC. “In the imagined world of superheroes, they can play with ideas in safe ways, take risks, and solve problems.”

“When they play with something, they bring it into being. That’s the fundamental theory that grounds our class — they can play with and think about something that has deep resonance for them culturally or historically, and they can do something about it in the real world.”

Kelsey Randa, an English major and student in Jurow’s EDUC 4411, worked with a student who taught her about the power of play. “At first he was really shy, but he opened up a lot when we started working on the superheroes,” she said. “We cannot assume that they can’t talk about central issues.”

Anisah Spahn, a humanities and English education major, said the project allowed students to exchange ideas and address concerns. “They loved to talk about topics that relate to cultural background,” she said. “They grew a lot.”

Like a faithful superhero, the hero unit will return to EPIC next semester. However, the EPIC elementary students will work with new undergraduate partners. As the fall semester came to a close, saying goodbye was hard, and there were plenty of hugs to go around. It turns out, ‘you don’t need a costume and you don’t need special powers’ to have an impact on children and to inspire change in the world around you.