The Colorado Snow Flea, Boreus coloradensis, is named for specimens collected from the Mountain Research Station on Niwot Ridge in 1952 and now preserved in our entomology collection. The common name “snow flea” also covers another group of insects called Collembola, or springtails and it is important to note these are distinct from the Colorado Snow Flea shown here. The Colorado Snow Flea is a scorpionfly, a familiar insect to fly fishers! Colorado Snow Fleas are very small, barely reaching 2.5mm long. Their bodies are black with a bronze iridescence, and they are covered in small white hairs that can only be seen with the aid of 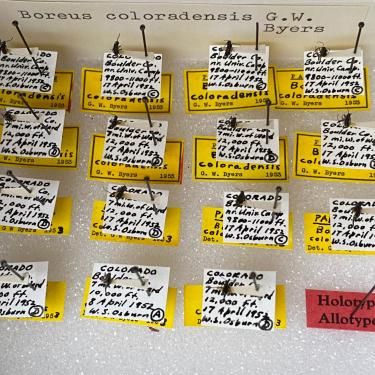 a microscope. Despite their diminutive size, their dark body color contrasts with the snow and their occasional abundance and aggregating behavior make them easily detectable during the late months of winter and early months of spring on top of snow. Colorado Snow Fleas can be found between 7,500- and 12,000-feet above sea level in forested mountain slopes. Both immature and adult Colorado Snow Fleas feed on moss. Similar to moss, these insects are intolerant of dry conditions and are inactive during the dry months of the year. To withstand the freezing temperatures, Snow Fleas can cool the temperature of their body fluids to -23°F!

Catching sight of an active insect during Colorado’s winter months is a rarity, and this must have been what William S. Osburn–one of the founding board members of the CU’s Institute for Arctic and Alpine Research–thought when he decided to collect several specimens of the Colorado Snow Flea in 1952. These specimens were quickly vouchered in the entomology collection of the CU Museum of Natural History, and later sent on to an entomologist who specialized on the Snow Flea group, George Byers. In 1955, Byers declared the Colorado Snow Scorpionfly a unique species – Boreus coloradensis Byers. The type specimen, or the specimen for which the species description is written, is vouchered at CUMNH.

See All Wonders of the Week!