Long time, no see! The CU Museum is reopening Monday, September 27 in compliance with all relevant health guidelines. Masks are required indoors regardless of vaccination status. Visit CU's COVID-19 page for updates and information. 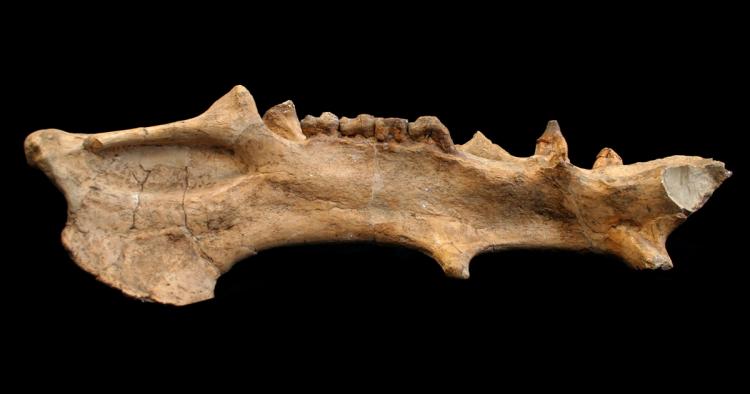 Archaeotherium is an entelodont which are extinct members of the artiodactyls (an order that includes today’s cattle, deer, and sheep) that lived alongside rhinos and early horses on the floodplains of eastern Colorado, Wyoming, South Dakota, Nebraska, and Texas during late Eocene – Oligocene time (ca. 37 – 23 million years ago).  An adult Archaeotherium could reach over 6 feet (2 m) in length, with a large skull over 3 feet (1 m) long. Its long jaws (like the one shown here) and low, rounded cheek teeth suggest Archaeotherium was an omnivore, as bunodont teeth typically suggest an omnivorous diet. It may have used its tusk-like canines to dig tubers and other forms of vegetation out of the ground. However, recent studies suggest it was a bone-crusher too. Bones belonging to the ancient camel, Poebrotherium were found from the White River Formation in Wyoming were thought to be killed by Archaeotherium as punctures match the premolars of Archaeotherium.

Based on its size, body shape, teeth, and diet, Archaeotherium is often compared to today’s pigs, and in fact it has been popularly called the Giant Pig from Hell! However, in 2008 and 2009, a study concluded the entelodonts are closely related to whales and hippos, thus forming the Whippomorpha (Cetancodontamorpha) clade. Whales are evolved from artiodactyls, thus strengthening the relation between entelodonts. These recent studies suggest that Archaeotherium and entelodonts probably were not a close cousin to today’s pigs at all. Many Archaeotherium skulls appear to exhibit injuries, so these large mammals are often interpreted as an argumentative bunch!

See All Wonders of the Week!