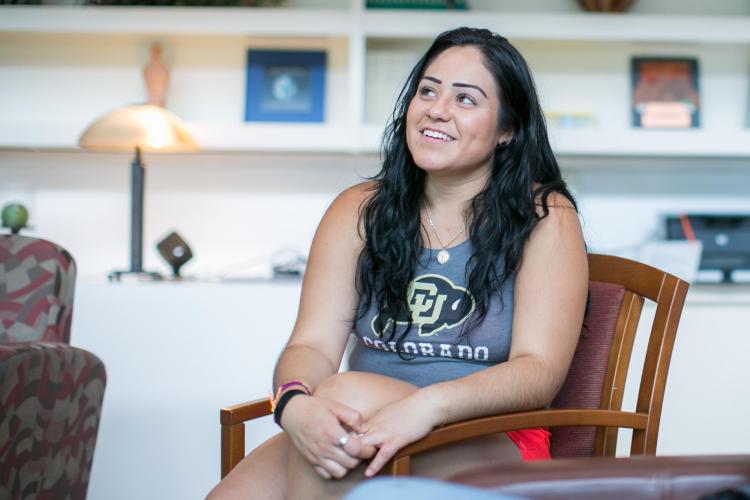 Now is the time to act without fear.
My only crime has been to dream the American Dream.

Gabriela “Gaby” S. is the first person in her family to graduate from high school. Today, she is a third-year University of Colorado Boulder student, a Puksta Scholar, and an integrative physiology and Spanish double major who is preparing to be a doctor. Among other awards and recognitions, Gaby was recently accepted into the competitive Undergraduate Pre-Health Program at the University of Colorado Anschutz Medical Campus, which partners with Kaiser Permanente Health Plan of Colorado.

Throughout her years as a student in Colorado public schools, which she started attending in 3rd third grade after her family relocated to the United States from Mexico, Gaby was a bright and highly motivated student. Since she was a young girl, Gaby has always wanted to be a doctor; but as an undocumented person growing up in southeastern Colorado, she was unsure if she would ever be able to pursue her dreams.

"College was not an option for me when I started high school," Gaby explains. "I always knew that I wanted to be a doctor. My mom lost a baby when we still lived in Mexico. My little sister was born, but then she died months later due to the lack of medical attention in Mexico. Also, when I moved to the U.S. and I noticed the lack of diversity and cultural competency among healthcare providers in hospitals, this also influenced my decision to become a doctor," she says.

At the end of Gaby's junior year of high school in 2012, a new U.S. immigration policy went into effect: the Deferred Action for Childhood Arrivals, or DACA, which allowed some individuals who, like Gaby, had entered the United States as undocumented children to receive a renewable two-year period of "deferredaction" from deportation. DACA also promised recipients newfound eligibility to receive driver’s licenses and work permits. As of 2017, approximately 800,000 individuals — referred to as "DREAMers" after the DREAM Act bill — were enrolled in the program created by DACA. One of these individuals is Gaby.

"When I received DACA, I was so happy because I knew I could start to work and help my family. My family did not have a lot of money and my parents were working really hard to make ends meet. My dad and my grandpa were working two shift jobs each, day and night. My grandmother was very sick and had lots of medical bills that were hard for my family to pay, because we didn't have Medicaid or any other assistance like that. The support my family and I received from our community inspired to me give back. I got involved with the soup kitchen because I knew it was a way to help others but also help my own family. I learned that by helping other people it could help me, too," Gaby says.

After Gaby received her DACA card, she felt a new lease on life. She was able to get a driver's license and drive her family members around legally, which meant she could stop worrying about what would happen if her parents ever got pulled over. She could get a job and apply for college.

"DACA was really a big change for me. It was a light of hope," Gaby says. "I applied to all the universities in Colorado and I got into all of them. But then I chose CU Boulder."

Unfortunately for Gaby and the hundreds of thousands of DACA recipients around the country, President Trump announced in September that his administration would end DACA in six months’ time if Congress does not find a more permanent solution. The administration issued this Statement from the President about the decision to end the DACA program.

Whether or not Congress takes action to protect DACA recipients and DREAMers is yet to be seen. In the meantime, Gaby is speaking out as a DACA student, and trying to help people understand what it would mean for her and other people like her if federal lawmakers do not enact legislation providing a permanent legal solution for DACA recipients.

On Wednesday, Oct. 25 Gaby will be a featured guest on the new podcast "AMPLIFY: Stories of University-Community Collaborations," which is a program of CU Engage in partnership with community radio station KGNU. And this November, Gaby and two other CU Boulder DACA students have been invited to travel to Washington, D.C., with the national organization United We Dream to learn more about policy advocacy and civic engagement. During their time on Capitol Hill, Gaby and other DACA students will speak with their state congressional representatives to share their personal stories and advocate for a permanent legal solution for DACA recipients, a position that the CU Boulder administration has advocated for as well.

"When [the Trump administration's] DACA decision happened, the first thing that came to mind was, 'Everything is over, I won't be able to continue with my education, I'm going to lose my job, what about the information I've already shared with the government?' It felt like my whole world was coming down," Gaby relates.

"We were raised to feel fear. I was taught not to talk about my immigration status. Not to open the door. Not to talk to the police. For example, my brother has been here his entire life. He came to this country when he was 8 months old and has lived in Colorado ever since. Now he's 14 years old, and he wants to go to school like me. He's a good kid, a smart kid, but I don't know if he'll ever be able to because something like DACA might not exist for him. So what will he do then?" Gaby says.

"I never would have imagined myself as a person advocating for better immigration policies," says Gaby. "But now I am, because I’m living this. I have to help. So in a way, going to Washingtion, D.C., is my way of doing that. I want to advocate not just for DACA students but for our families. I don’t want people to have to stay afraid, and to be in the shadows. I have overcome my own fear of speaking out and taking action, and I’m not going to quit," she explains.

For other CU Boulder DACA students like Gaby, only time will tell if Congress can come to an agreement and pass legislation that will help her continue her studies and, ultimately, become a doctor serving people in the country she calls home.

"I’m not going to give up," says Gaby. "The power we have now is to tell our stories and get into people's hearts and make them understand our situation. Our only crime has been to dream the American Dream." 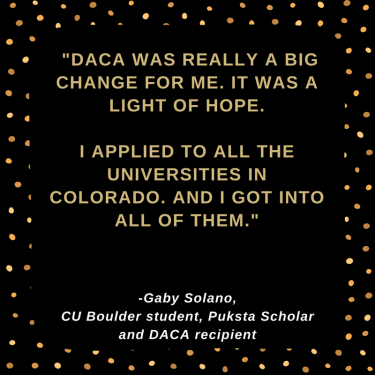 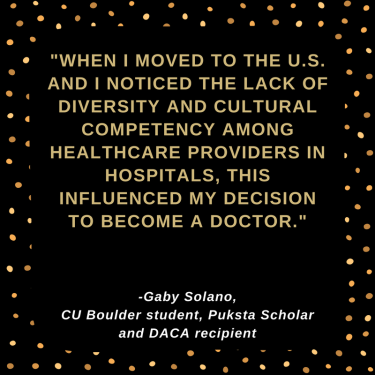 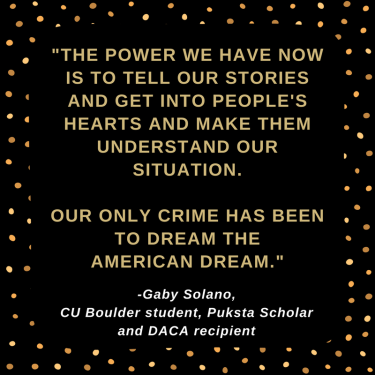