Students Teach English to CU Employees through the SWAP program 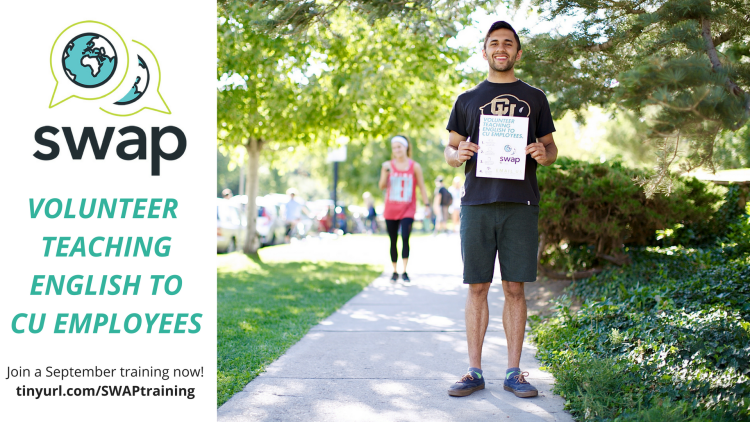 As a new student arriving at CU Boulder last fall, Nitin Beri discovered the SWAP program during the Be Involved fair. He thought it would be a good way to feel more connected to the campus. Beri, originally from Portland, OR, decided to get involved and attend a SWAP training, where he learned how to teach English to a CU employee.

"As a freshman, I felt really overwhelmed by how big the campus was and how many organizations there were. But with SWAP, I realized I'd not only get to meet other students, but also some of the adults who work here," Beri explains.

"Nobody really thinks to talk to the people who clean the dining hall or residence halls. It's important to reailze that these folks are all people with their own stories, and many of them are not originally from this country," Beri said.

Following his training last year, Beri, who is now a sophomore majoring in Neuroscience, was partnered with a CU Employee Guadalupe Lopez, who is a member of the CU Boulder custodial staff. Beri and Lopez met twice a week for one hour at a time, where Beri helped Lopez improve her English skills. Beri, who speaks some Hindi but not Lopez' native Spanish, was pleased to realize that students don't need to be bilingual to be effective at teaching English in the SWAP Program.

Guadalupe decided to participate in the SWAP program because she wanted to better communicate with her family. Her kids were born in the US and speak English, and she wanted to be able to participate better in their English speaking activities, like their schooling. But what she gained from her experience in SWAP was more than just English classes.

"It was really special to share and learn together with Nitin," says Lopez. "I taught him some things about the customs and cultures of Mexico, and he taught me things about India, where his family is from. We've become very good friends. I love him like a son."

Lopez recommends the program to other CU Employees who want to improve their English skills. "Sharing with the students is a great way to practice speaking English. And SWAP students are such great students, they're really good people. You get to talk together and learn so much from each other."

SWAP Director, CU Boulder student Bea Lacombe, explains how the program benefits both CU students and employees. "It's an opportunity for students to build relationships with someone on campus who we normally wouldn’t get to know. SWAP is a great way for students and employees to learn from each other across cultures," Lacombe says. She notes that CU Employees in the SWAP program are better able to participate in their communities in Boulder when they know more English. "The employees who have participated tell me that SWAP has helped them access more resources in Boulder and do other things, like help their kids with homework," reports Lacombe.

SWAP is offering several trainings in September for students interested in volunteering to teach English to CU Employees throughout the academic year. For more information, you can visit the SWAP website, the September SWAP Trainings event page on Facebook or sign up here.

SEPTEMBER 2016 SWAP TRAINING INFO FOR STUDENT VOLUNTEERS
Student volunteers must attend one of the training sessions, which are two hours long.
SWAP offers a total of four sessions.
SWAP will provide really good catered food at the trainings!
Make-up trainings will not be offered, except for special circumstances.