Astrodynamicist and space environmentalist Moriba Jah (MAeroEngr’01; PhD’05) is among the prestigious 25-member cohort of the 2022 MacArthur Fellows Program.

After receiving roughly 2,000 nominations per year from a pool of invited external nominators, the MacArthur Foundation selects individuals demonstrating exceptional creativity and a history of significant achievement who are on the precipice of great discovery or a game-changing idea. Jah, a CU Boulder alumnus, is one such individual.

He won the fellowship for laying the foundation for a safe, prosperous and sustainable near-Earth space environment.

“Much like people are keeping track of things moving on land, air and ocean, my job is to keep track of human-made things moving around in space,” said Jah, associate professor of aerospace engineering and engineering mechanics at the University of Texas at Austin. 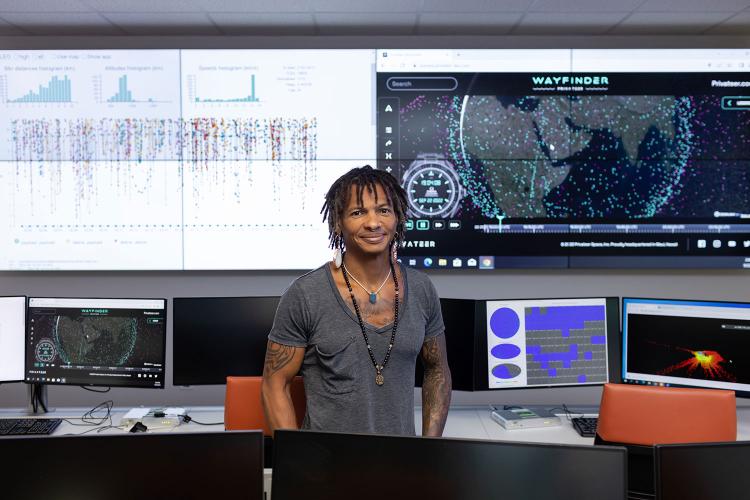 Moriba Jah is a 2022 MacArthur Fellow.

Jah’s work also involves policy guidance and public education concerning the framework of space environmentalism, which he likened to human exploration of Earth’s assets. “That [type of] exploration was led by those most resourced, and it always came to the detriment of the environment — we’re doing the same thing with space.”

While Jah said he’s still in some disbelief about receiving a MacArthur fellowship, he wants “to invest these resources in me and my vision. Basically, I want space environmentalism to be mainstream across humanity. … I’m going to look for every means possible to be able to achieve that.”

A challenge in his field, he said, is the lack of empathy toward solving the problem of space debris.

“That’s the most difficult thing — mostly because people don’t have the awareness of what the problem is,” he said. “Then once they learn about it, it’s hard for them to see why it should matter to them.”

Jah strives to fix this by showing evidence “of the dependencies that we have, certainly in western civilization, on space-based infrastructure, services and capabilities in our daily lives.”

Together, Jah and his colleagues created a system to gather and catalog data through ASTRIAGraph and Wayfinder, free online visualization tools they’ve developed.

The alarming amount of space congestion he tracks includes expired satellites that continue to travel at high speeds. When satellites stop functioning, they will hurtle through space for centuries or more, he said. While space is often thought of as large and infinite, Jah confirmed orbital highways — where satellites are placed — are very finite.

“It’s a recipe for the tragedy of the commons: Space could become unusable because we keep on participating in that finite resource without the benefit of planning, coordinating and even understanding the decision-making processes of other people that are doing that as well.”

A Career Takes Off

“We’re just sending stuff up but not coordinating it with other countries.”

Jah’s career is founded on astrodynamics — the science that studies motion of objects in space — orbit determination and statistics, “as taught to me by the late George Born, professor emeritus and director for the Colorado Center for Astrodynamics Research.”

Jah explained how Professor Born gave him the opportunity to work alongside him during graduate school at CU Boulder. “I wasn’t a great test-taker; I didn’t do well on my GREs. ... But I did meaningful research and he said, ‘I want you to be a grad student here.’ It was an ‘I believe you should be here — now prove it to yourself’ sort of thing.”

He fondly recalled his time as a student and the beauty of campus, where his son is now an undergraduate engineering physics major.

Among his favorite CU memories are the meaningful exchanges shared during dinners that Professor Born and his wife, Carol, hosted for graduate students. Additionally, Jah said his camaraderie with other students has lasted for years, as he continues to keep in touch with former classmates.

Looking ahead as a MacArthur Fellow, Jah underscored his belief in the interconnection of all things: ”We are in an existential crisis; our only way through it is by having a successful conversation with our environment,” he said. “Stewardship is really what’s being asked for us to become, embrace and honor.”

“I hope that my work is able to recruit empathy from people to raise awareness, show evidence of the interconnectedness and hopefully motivate people to see themselves as stewards of the environment.”