Home Spring 2022 Turning Over a New Leaf: The Legacy of the Old Main Cottonwood

Turning Over a New Leaf: The Legacy of the Old Main Cottonwood 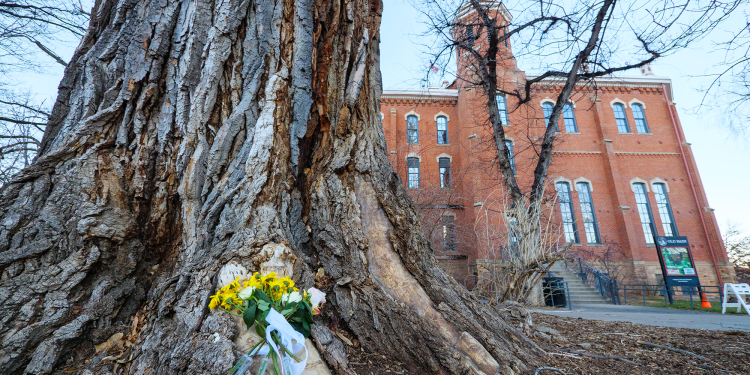 If the towering cottonwood that stood in front of Old Main could have talked, it would have had a lot to say about the last 140 years.

It stood guard on commencement day. It was blanketed with heavy snow, endured windstorms and floods and basked in Boulder’s abundant sunshine. It witnessed romances, heated academic debates and gleeful Norlin Quad shenanigans.

In recent years, the iconic tree began to show its age. In January, crews gently dismantled its limbs and branches using a crane to remove the tree, which was dying off in large sections. As far as CU’s forestry experts can tell, it wasn’t affected by disease or injury — it simply got old.

“The metabolic functions of the tree start to become out of balance and the tree can no longer sustain parts of the canopy,” said campus forestry supervisor Vince Aquino.

Though the tree’s removal marks the end of a CU era, it also signifies new beginnings. In 2014, forestry staff took cuttings from the cottonwood and passed them on to colleagues in the EBIO teaching and research greenhouse, who rooted them in containers. With a little nurturing, the cuttings grew into small trees — exact clones of the Old Main cottonwood that Aquino and his team will plant near the original’s location.

“Everything in life is succession, something replacing something else,” said Tom Lemieux, the assistant greenhouse manager who helped propagate the tree.

The university spent $35 in 1879 to buy 42 plains cottonwoods, hardy trees that live up to 80 years. Few could have predicted the longevity and enormity of the Old Main cottonwood, which grew to 110 feet tall with a 19-foot base circumference.

The Old Main cottonwood was the oldest, tallest tree on campus. On top of stellar genetics, the tree likely benefited from the campus’s historic flood irrigation system, and later a modern sprinkler system and forestry experts like Aquino and his team who cared for it.

And the tree had regular visitors — many attending Aquino’s tree walks.

“Trees really elicit an emotional response in people,” said Aquino. “It can’t be overstated how much trees change what people feel when they’re in a landscape. It happens on a level that people aren’t even aware of.

Temporary Building No. 1 has been a hospital, offices and classroom space. One thing it’s never been is temporary. END_OF_DOCUMENT_TOKEN_TO_BE_REPLACED