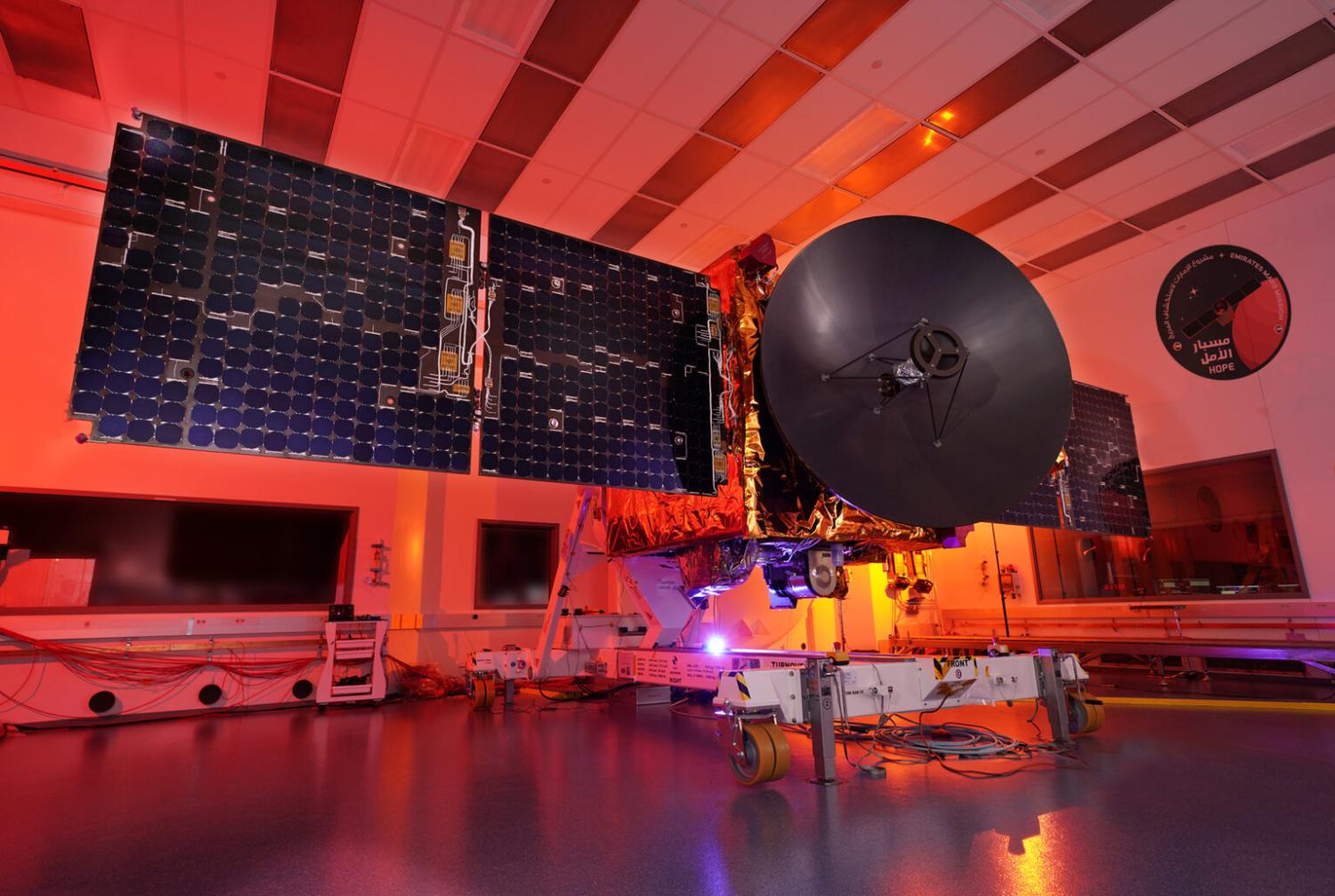 Since CU researchers first began sending experiments and instruments into space in the 1940s, the university has risen as a leader in higher education space research. In 2014, CU Boulder embarked on a new and unique challenge when it teamed up with the United Arab Emirates as the leading U.S. scientific academic partner on the Emirates Mars Mission (EMM).

For six years, researchers, scientists and engineers at the Laboratory for Atmospheric and Space Physics (LASP) at CU Boulder have been working on a mission led by the Mohammed Bin Rashid Space Centre (MBRSC) in the UAE to create a spacecraft that would monitor the complete atmosphere of our closest neighboring planet, Mars. Finally, on Feb. 9, 2021, at 8:41 a.m. MST, space buffs across the world looked to the cosmos with anticipation as that spacecraft — the Hope probe — successfully overcame the treacherous insertion into Mars’ orbit.

As scientists from both the MBRSC and LASP continue to work together and collect data from the Emirates Mars Mission, here’s a look at CU’s involvement in the collaborative, community-building nature of the UAE-led project.

The Emirates Enters the Space Sector

The journey to the Red Planet is one for the fearless.

Since 1960, when the Soviet Union became the first country to attempt sending a probe to the planet, more than half of all attempted Mars missions have failed. When the UAE boldly entered the scene in 2014, planning a mission that would make it the fifth entity to reach the red planet, their ambitions of joining the world’s leaders in space research became clear.

The UAE, which is made up of seven emirates (Abu Dhabi, Dubai, Sharjah, Ajman, Umm Al Quwain, Ras Al Khaimah and Fujairah), entered the space sector with unusual speed. The MBRSC, home to the UAE National Space Program and tasked with developing EMM, was founded in 2006. The country’s first Earth-orbiting satellite, Dubai Sat-1, launched three years later in 2009, just over a decade before the Hope probe.

As the UAE makes this swift foray into the space sector, one of their main goals has been to energize young, aspiring scientists within the Emirates. Sarah Al Amiri, chairperson of the UAE Space Agency and Minister of State for Advanced Sciences in the UAE, said to LASP that one of the mission objectives was “to stimulate a lot of students and an entire society within STEM. And we’ve seen a large shift with the mindset of students, first and foremost, within the Emirates. But we’ve also seen a lot of keen engagement within the region, a region that is typically known to be unstable, and that has triggered a lot of thoughts with regards to what is possible.”

This mission also aspired to transcend national boundaries and create a project that was backed by humans as a whole rather than by one single country. The MBRSC website notes that a strategic objective was to “encourage global collaboration in Mars exploration.”

Though the project was led by MBRSC at every stage, they emphasized this international collaboration. Teamwork often focused on using knowledge transfer to create the spacecraft through group effort and open communication.

This emphasis on international collaboration eventually led to CU Boulder’s involvement. The Mohammed Bin Rashid Space Centre partnered with several academic institutions in the United States, including CU Boulder as a leading scientific academic partner. Other scientific academic partners include Arizona State University and the University of California Berkeley. The final creation of the Hope probe was the culmination of knowledge transfer between individuals at all of these institutions.

CU Boulder created the Upper Air Laboratory, which later became the Laboratory for Atmospheric and Space Physics (LASP), in 1948, a decade before the founding of NASA. The lab, which seeks to identify and address key questions in planetary science, space physics, solar influences and atmospheric science, is the only research institute in the world that has sent instruments to all eight planets and Pluto.

“The Laboratory for Atmospheric and Space Physics has an extensive 70-year history designing and operating hardware in space,” said Pete Withnell, program manager for the EMM at LASP. “Combining this experience with the academic nature of the organization and the university as a whole uniquely positioned CU as the ideal partner for this mission.”

Since the late 1960s, LASP has been involved in six successful missions to Mars, including EMM. For over 15 years, the lab has led NASA’s Mars Atmosphere and Volatile Evolution (MAVEN) mission, which began orbiting Mars in 2014. The MAVEN mission was designed to help scientists better understand the role loss of atmospheric gas to space played in changing the climate of Mars over the eons. Science and data collected by the Hope probe about Mars’ atmosphere will supplement what MAVEN and other missions have already learned in an effort to learn more about the puzzling atmosphere of the Red Planet.

In addition to the research background that LASP brings to the table, CU’s commitment to international education also played an important role in its involvement. “The capability to successfully implement a deep space mission was vital, as was the ability and enthusiasm to engage in the knowledge transfer aspects inherent in this collaborative program,” said Withnell.

The opportunity to collaborate across nations has been transformative for many involved. Withnell remarked that the Emirati scientists, engineers and mission operators work alongside their U.S. counterparts at every level, which results in a single, homogenized team working together. “Many Emiratis lived in Colorado for extensive durations to work hands-on in the development of the spacecraft and scientific instruments,” said Withnell. “For the individuals on the team, the cross-cultural aspect of the program has been enlightening and has had a profoundly positive impact.”

Although the Hope probe began its journey to Mars from an island off the coast of Japan, it was created in Boulder by Emirati scientists from MBRSC in partnership with engineers at LASP. The seven-month-long, 306-million-mile journey launched from Tanegashima on an H-IIA rocket.

While most of the hands-on building and testing of the car-sized spacecraft occurred in Boulder, engineers from around the world contributed to the work. Of the three science instruments on board the probe, the Emirates eXploration Imager (EXI) and the Emirates Mars Ultraviolet Spectrometer (EMUS) were developed by MBRSC engineers in partnership with LASP.

The EXI camera will take high-resolution images that can measure the properties of Mars’ water, ice, dust, aerosols and ozone in its atmosphere. The EMUS will measure global characteristics and variability of hydrogen and oxygen in the Martian Atmosphere. The third science instrument, EMIRS, was developed at Arizona State University and will measure the distribution of dust particles and ice clouds while tracking the movement of water vapor and heat through the atmosphere.

Withnell noted, “Personnel at LASP also collaborate with the Colorado Center for Astrodynamics Research (CCAR), which operates out of CU’s College of Engineering and Applied Sciences. CCAR provided attitude determination and control expertise during the program’s six-year development prior to launch.”

On Feb. 10, one day after orbit insertion, the EXI took its first science image of the red planet from orbit. Taken at an altitude of 24,700 kilometers above the Martian surface, the composite color image was created by combining red, green and blue EXI images. In the photo, the sunrise sweeps across the planet and barely illuminates Olympus Mons, the largest volcano in our solar system, which measures about the same size as the state of Arizona.

On Feb. 20, the EMUS took its first science images of the atmosphere at an altitude of 36,000 km. The photos consist of several false-color images that show the reflection of sunlight from the extended cloud of hydrogen atoms surrounding the planet; energetic electrons causing other oxygen atoms to glow; and a combination of emissions coming from carbon monoxide molecules. These images provide insight into the upper atmosphere of the planet.

If all goes according to plan, EMM will make incredible strides in scientific understanding of the Martian atmosphere. Now that the probe has been inserted into orbit, the hardest part is over.

Looking forward, the spacecraft will measure particles in the atmosphere and provide information integral to understanding, among other things, atmospheric escape, the phenomenon thought to be responsible for the disappearance of the water that once flowed across the surface of Mars.

As these incredible discoveries roll in, some of the greatest achievements remain the international collaboration of scientists and the way this mission energized young people around the world.

As Al Amiri stated in an online event hosted by the US-UAE business council, “This is what space is all about; it takes out of it the context of nationality or background… You become a species more than anything else.”