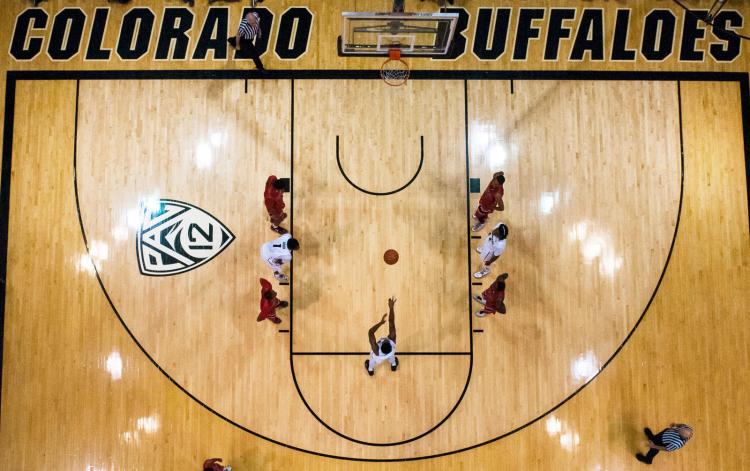 A CU men’s basketball player shoots a free throw on the court at the CU Events Center. (Photo by Zach Ornitz/University of Colorado)

This year, Colorado’s seed is the highest it’s been since the NCAA started seeding the entire field in 1979. The Buffs have never won the tournament, but they have gained entry 15 times, including in 2021. As you cheer on the Buffs to what will hopefully be their best performance in March Madness yet, here’s a look at 10 years the CU men’s basketball team made it to the NCAA tournament.

1940 was the first year the CU men’s basketball team was invited to play in the NCAA tournament. CU, coached by Frosty Cox, was the regular season champion of the Mountain State Athletic Conference. USC toppled the Buffs with a score of 38-32 in the Western semifinal, and CU lost to Rice in the West Region’s third-place game.

Two years after the Buffs’ first time playing in the NCAA tournament, they returned, still under the leadership of coach Frosty Cox. This time, the team was more successful, making it to the national semifinal. Although this was only an eight-team tournament, it is boasted as the first time CU made it to the Final Four. The Buffs were knocked out by Stanford with a score of 46-34.

In 1955, CU had its first 19-win season, culminating in a bid for the NCAA tournament. The team opened with a 69-59 win over Tulsa, then beat Bradley to move on to the national semifinals. The Buffs played hard but lost to San Francisco by a score of 62-50.

After winning 14 of their final 15 regular season games, the Buffs knocked out Texas Tech in the Midwest Region semifinals. CU then faced off with Cincinnati in the elite eight but lost by a score of 73-46.

Coached by Sox Walseth, the Buffs of 1963 toppled Oklahoma City in the Midwest Region semifinals. They then followed a path similar to the year before, losing to Cincinnati in the national semifinals with a score of 67-60.

In 1969, CU returned to the top-25 ranked teams with a 21-win season. The Buffs faced off with their iconic rival, Colorado State, in the Sweet 16 but suffered a crushing loss with a score of 64-56.

After 28 years without receiving a bid for the tournament, the Buffs rebounded with a bid in 1997. Led by Colorado native Chauncy Billups, who was tapped for the NBA after the tournament, the team toppled Indiana in the first round with a score of 80-62. The Buffs headed home in the next round after a loss to North Carolina.

In CU’s first year in the PAC-12 and Tad Boyle’s second year as coach, CU stunned its opponents by winning the conference tournament. After winning four games in four days, CU entered the NCAA tournament with a second-round win over the University of Nevada Las Vegas. Their winning streak came to an end in the third round, when Baylor knocked out CU with a score of 80-63.

After making the tournament in 2012 and 2013, the Buffs’ entry in 2014 marked CU’s first-ever third consecutive bid to the NCAA tournament. This stint in the tournament was short-lived, as CU lost to Pittsburgh in their first game.

In 2016, CU’s most recent year of entry into the NCAA tournament before 2021, the Buffs were named a No. 8 seed. The Buffs were knocked out in the first round when they lost to UConn with a score of 74-67.