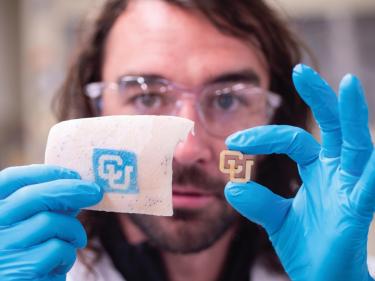 In the future, tattoos may be more than just a way to express yourself.

Scientists in CU Boulder’s Emergent Nanomaterials Lab are creating “tech tattoos” made up of tiny particles that change color in response to stimuli like heat or sunlight.

The special inks in these tattoos can alert wearers to health risks. One prototype tattoo, for example, only appears in UV light, warning of the potential for sunburn. When sunscreen is applied, the ink disappears. Someday, these tech tattoos could serve many other functions, like revealing blood sugar levels, telling you how much you’ve had to drink and storing heat to keep you warm.

"I believe I will see people on the surface of Mars before I die."

The social media and web portion of Polis’ records are already available in the library system’s special collections unit. They document his use of Twitter, Facebook and Instagram during a 10-year U.S. House of Representatives career that began in 2009. Polis became governor in January.