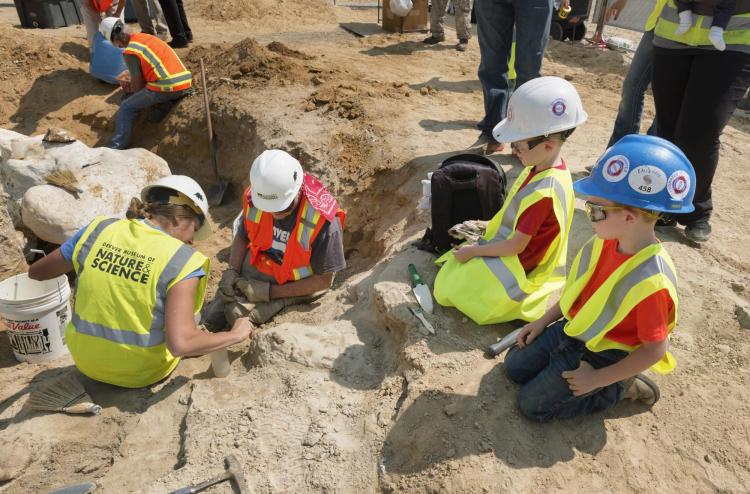 On Aug. 29, 2017 stunned construction workers unearthed a dinosaur horn at a site in Thornton, Colo., 30 minutes outside of Boulder.

The fossil remains originally were thought to be those of a Triceratops, but were found to belong to its close cousin Torosaurus instead. The discovery is the first recorded Torosaurus in Colorado, according to the Denver Museum of Nature & Science.

During the 12-day dig at the site, paleontologists and volunteers recovered 80 percent of the dinosaur’s skull and 15 percent of its body.

“Finding a well-preserved dinosaur skull is a fairly rare event,” said CU paleontologist Karen Chin, who didn’t work on the dig, but was eager to hear the fossils were found in the Denver metro area.

More than 75 volunteers helped excavate and plaster the fossils for transport to the Denver museum, said Maura O’Neal (MJour’07), the museum’s communications and media relations manager, who also participated in the dig.

The fossils will live in the museum’s permanent collections.

“This is the most complete Cretaceous-period skeleton ever to be found in Colorado,” said O’Neal. “By comparing it to other horned dinosaurs throughout the Rocky Mountain region, we’ll learn more about what life was like 66 million years ago in the area, and about the ecology and relationships of horned dinosaurs in the Mountain West.”