Home Summer 2017 No Piano? No Problem

“Sorry, I get into this,” he said distractedly, absorbed in the blues beats he was making on the fly.

Satisfied with his rhythm, he looped the track on his laptop and began overlaying new notes in the key of A. Music boomed, though no instrument was in sight.

No traditional instrument, anyway — Klipfel was making music through the gloves on his hands, using an ordinary table as his keyboard.

He continued drumming his fingers, encased in a pair of black construction gloves covered in buttons, switches and wires connected to his laptop. The harder he pressed, the louder the sound of specific notes played. Flexing his fingers triggered a sensor that adjusted overall volume and sound distribution. By flicking a switch on the side of a finger, he could shift from piano to drums or saxophone.

Software on his laptop recorded it all.

“You’re always in the right key and the right scale,” said the inventor, a 22-year-old senior from Reno, Nev. 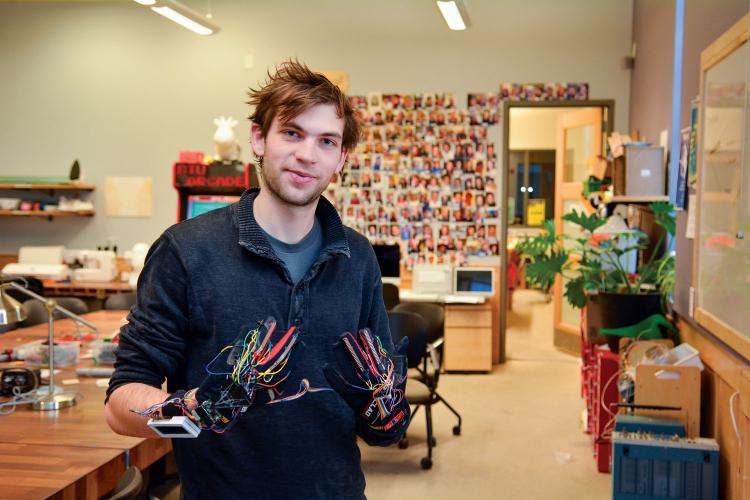 Basically, he said of the gloves, “It’s a wearable electronic musical instrument.”

Klipfel is not the first person to develop musical gloves. But his are unique in their ability to generate any note in any key for major, minor, blues and pentatonic scales.

A musician since 6th grade, when he began playing saxophone, Klipfel eventually learned dozens of instruments, including the trombone, drums and piano. He started composing electronic music in high school.

Klipfel designed the gloves in spring 2016 for a course on wearable technologies in the ATLAS Institute, part of the College of Engineering & Applied Science.

“I got tired of playing piano, then jumping to the computer and back and forth,” he said.

“The gloves as a whole are a MIDI controller,” he said. “They send specific signals to the music software, which then interprets the signal and triggers any sound I define within the program.”

The gloves were Klipfel’s first experience with circuitry and robotics, and he spent a lot of time on Google figuring out how to make everything work. The project cost him about $300.

“I advised Kristof to start with one sensor on his glove and go from there,” said Alicia Gibb, his instructor. “He came in the next class with five sensors working on one glove. From that point, I knew these gloves were going to be epic.”

In March, Klipfel took the gloves to Hiyoshi, Japan, for the Tangible Embedded and Embodied Interactions conference. There he showed them off for hundreds of people at a student design challenge — and walked away with the award for best project implementation.

As far as Klipfel is aware, none of the other music gloves on the market have as much flexibility in sound as his do. But for now, he has no plans to patent or commercialize his product.

“I’m just trying to graduate,” Klipfel said. “I wanted to do something off the wall and really cool. This ended up being that.”

Making the gloves introduced him to other interests and has inspired him to consider careers in virtual reality, robotics, web development or game development, he said.

Between now and graduation next fall, Klipfel will devote himself to the drone racing club he started at CU, hiking around Boulder and creating a video game with his brother. He’s also working on another ATLAS side project called Paper Mech, which aims to get children interested in mechanical engineering by using paper and household items to make things move.

“There’s always new stuff that I’m working on,” he said. “I know now I can complete something pretty complex from scratch.”

For years, the Taliban banned music in Afghanistan. Now the country has its first all-female orchestra — and Allegra Boggess to thank. END_OF_DOCUMENT_TOKEN_TO_BE_REPLACED 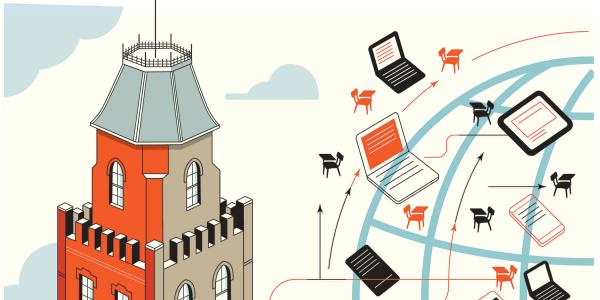