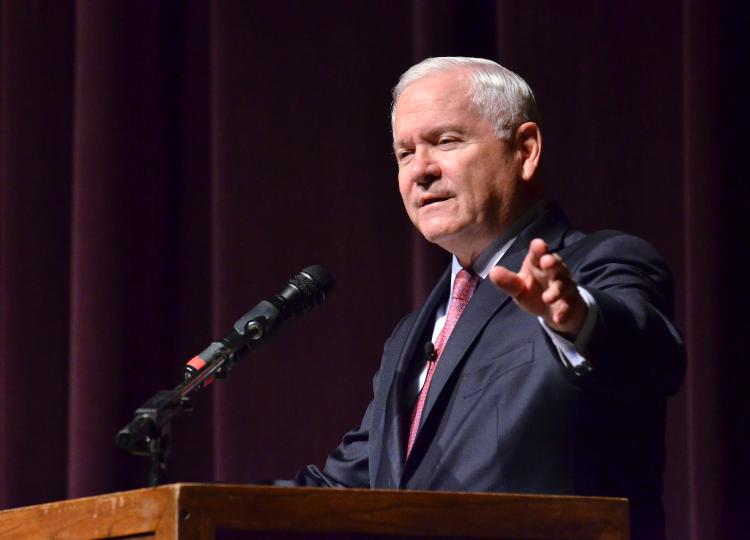 Former Defense Secretary and CIA Director Robert M. Gates met with students at CU Boulder March 1 as part of a two-day campus visit that began the night before with a public address and interview at Macky Auditorium.

The nation’s former top spymaster was scheduled to meet Wednesday with ROTC students, members of the President’s Leadership Class and others, and to sit for a second question-and-answer session at Wolf Law.

Gates, 73, worked for eight U.S. presidents, most recently George W. Bush and Barack Obama, and is the author of several books, including A Passion for Leadership: Lessons on Change and Reform from Fifty Years of Public Service. He is the debut guest in CU’s new Leo Hill Leadership Speaker Series.

Gates’ long and varied experience in Washington gave him plenty of opportunity to study and practice leadership, but did not make him a fan of the nation’s capital city.

In his brief opening remarks at Macky Tuesday, he said he was glad to be in Boulder, paused, then added, “It’s a pleasure to be anywhere but Washington, D.C.”

He lamented a culture of egotism in Washington and said experience had taught him that effective leadership requires “vision, integrity, courage, respect for others, a willingness to listen and to be challenged, humility and, above all, an understanding that great leadership actually is a team sport.”

Afterward, during a wide-ranging public interview led by CU Boulder Chancellor Philip P. DiStefano, Gates offered thoughts on presidential Tweets, U.S. Secretary of State Rex Tillerson, whom he called a friend and “a person of total integrity,” U.S. foreign threats (Iran, North Korea, China and Russia), the importance of making Muslims in the United States feel welcome and how his work in government influenced his management of Texas A&M University. He was president there from 2002 to 2006.

Gates also shared anecdotes from the many years he worked closely with U.S. presidents of both major political parties, noting personal characteristics that helped (or hindered) them.

Of the presidents Gates knew, Ronald Reagan had the best sense of humor, he said. Once, when Reagan’s hearing aid audibly and repeatedly malfunctioned during a briefing, the president leaned over to Gates and whispered, “It’s my KGB handler trying to reach me.”

“Two presidents I worked for had no discernable sense of humor,” Gates said. “Richard Nixon and Jimmy Carter.”

Gates mentioned he’d been to Boulder once previously, while serving as president of Texas A&M. He’d come to watch the Aggies play at Folsom Field.

“The day was spectacular,” he said, but “I do carry away some painful memories of my last visit to Boulder.”

The Buffs, it seems, won.

Gates didn’t cite the year of the visit, but Buffs football played A&M in Boulder in October 2005, during Gates’ A&M tenure. CU outscored A&M 41 to 20.

An Eagle Scout who grew up in Kansas, Gates is currently national president of the Boy Scouts of America.

Photograph by Casey A. Cass