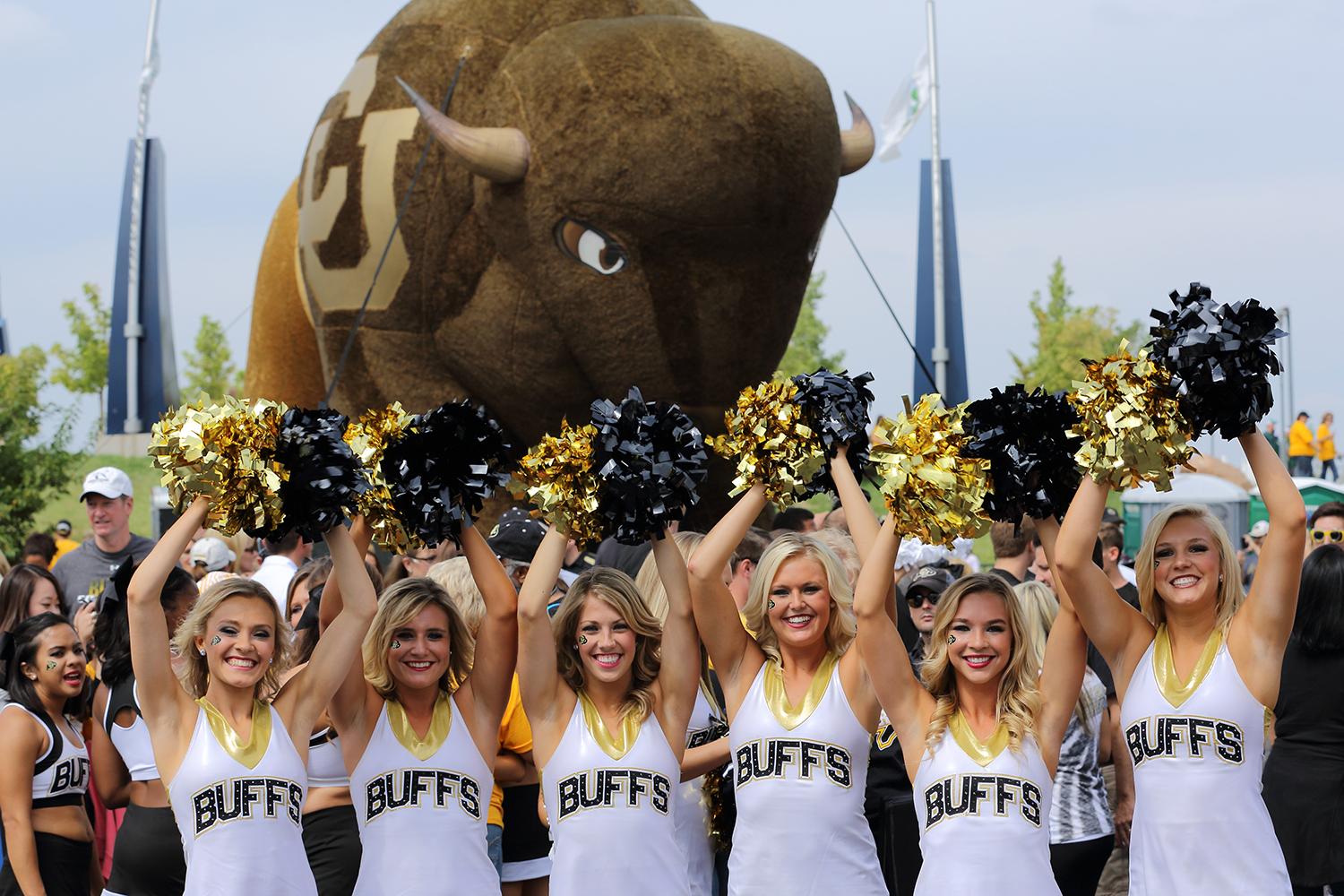 Then came the curveball.

“He wanted fur, and two different colors of it,” Gilfedder, CEO of Boulder Blimp Company, said of Kent Zimmermann (Edu’80; MPubAd’90), the former CU Boulder Alumni Association executive director who ordered the inflatable more than a decade ago. “We didn’t even know how to offer it to him.”

Rising to the challenge, Gilfedder and her team delivered “Alphie” — named after his live counterpart, Ralphie — in 2002.

Ever since, the giant inflatable mascot has become a staple attraction at outdoor CU Alumni Association events — an easy topic of discussion and the ideal photo prop for students, alumni and Buffs fans.

Well-traveled, Alphie has appeared at the Denver Zoo, golf courses, on Pearl Street and on Boulder’s 29th Street Mall. His farthest journey so far took him to CU’s football game at the University of Massachusetts in Foxborough, Mass, in 2014. His most recent trip was to Levi’s Stadium in Santa Clara, Calif,. for the Pac-12 Championship football game. The buffalo also has appeared on the ski slopes of Winter Park, Colo., and atop a giant apartment building in Denver for the Rocky Mountain Showdown.

“Alphie is one-of-a-kind,” said Dawn Barone (Hist, Psych’09), an Alumni Association senior program manager who has helped set up Alphie at more than 300 events for 11 years.

At each event, it takes two or three students, known as “Alphie Handlers,” to roll out the buffalo, plug in air blowers to inflate him and secure him to the ground with either 16 60-pound weights or eight 18-inch stakes, depending on the surface.

Deflated, Alphie weighs about 210 pounds. He takes about 30 minutes to set up.

“It’s not a one-person job,” says CU senior Roy De Jesus (CompSci’17) an Alphie Handler who helps set up the inflatable at events on campus.

Alphie made 31 appearances in 2016 alone, and there’s one to go: The Valero Alamo Bowl in San Antonio Dec. 29, the Buffs’ first bowl game in a decade.

The original buffalo was used so often that he wore out. In 2016 the Alumni Association commissioned a new one, also from Lafayette-based Boulder Blimp Company, for $13,000.

Boulder Blimp Company specializes in creating giant inflatable shapes such as animals, race arches, tents and characters for large corporations and nonprofits alike. Past clients include Ford, Pepsi, Verizon, Chick-Fil-A and Walmart. But prior to 2002, no inflatable had been designed with fur. CU’s order posed a unique test.

Lead designer Chris Lund took 30 hours to perfect the design and create a 3D model, much more time than the typical 18-25 hours it usually takes to create a large custom inflatable shape. The fur was shipped to Colorado from a plush fabric company in Wisconsin.

The design team made about 100 fabric patterns for the buffalo and cut them in-house on a 45-foot-long cutting table. Six sewers pieced the 20-foot-tall by 25-foot-wide buffalo together using sewing machines. The entire process took six weeks.

“I would venture this is the only inflatable fur buffalo in the world,” Gilfedder said.