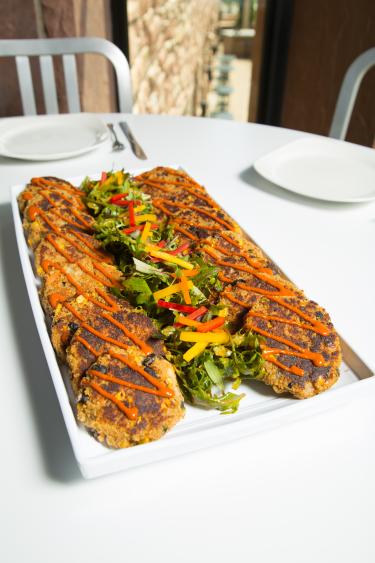 When CU Boulder’s newest dining hall opens in January, a staple dining hall appliance will be missing — a fryer.

But it will have features not often seen in a campus dining hall. Village Center, which replaces the former Darley Commons building in Williams Village, will house a 3,000 square-foot greenhouse with 150 vertical gardens growing all the lettuces needed to stock the restaurant’s salad bar.

The decision to eliminate the fryer was a big one, as French fries and fried chicken are often a go-to for college students. Executive chef Eliah Golden is confident in her team’s ability to bring their customers fresher and healthier meal options that are also tasty.

“Here we have so much opportunity to actually lead the nation in what we do,” said Golden, a Boulder native who previously worked as a chef at two trendy restaurants in downtown Boulder, Brasserie Ten Ten and The Mediterranean Restaurant. “We can set the bar for other universities.”

Since CU Boulder’s Center for Community (C4C) opened in Aug. 2010, its dining operation has raised the eating standards on campus tremendously in the other two dining halls, which are located in Williams Village and Sewall Hall. (Libby Dining Center closed this year.)

Eighty percent of the food served in the dining halls is made from scratch in-house, said executive sous chef Billy Kardys, who has worked in campus dining for 15 years. Ingredients and products are mostly sourced from vendors within 250 miles of campus, including the newest addition to the C4C dessert station, Boulder Organic Ice Cream.

All beef and chicken breasts and thighs served in the dining halls are antibiotic-free and fish are sourced from small-scale U.S. fisheries, added Golden. 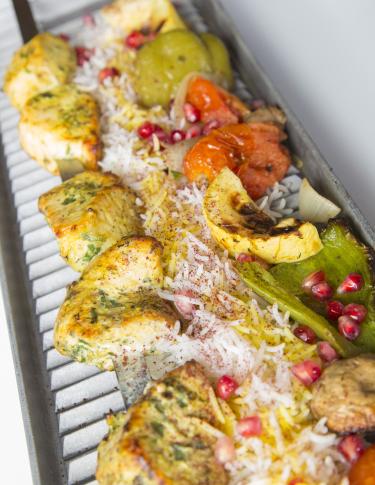 “When you’re a chef, and you’re passionate about food, you have a responsibility to your customer,” said Golden. “At home, I buy antibiotic-free chicken, so why wouldn’t we do it here?”

Almost all the herbs used in meals are grown on campus, and more are expected to be grown in the Village Center greenhouse. Kardys said: “Our Persian cuisine uses more herbs than I’ve ever seen in my life!”

The menus themselves go through a rigorous testing process, said Paul Houle, director of campus dining services. Each dining hall’s menu is scrutinized for repetition of ingredients, inconsistencies or gaps in certain food groups, he said, and students and staff partake in taste tests.

Golden, Hardys and three other executive chefs plan the menus, but several others are involved in recipe creation. For the Village Center recipes for instance, 18 staff members were involved.

“I’d be sitting in my office, and people would walk in with three different curries to taste,” said Houle.

If a meal isn’t well-liked, determined by random polls of dining students or by tallying food sent back to the dish area, it’s replaced by a back-up dish and then re-evaluated.

Lead chefs, who all have been through formal culinary training, embrace the large task of pleasing students’ evolving tastes with new and interesting meal options. 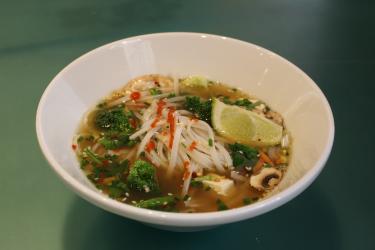 “The fun thing with millennials is that they like to challenge their palates,” he said, adding that he’s noticed students requesting more grains and flocking to the C4C’s new yogurt and granola bar.

Over time, Kardys has noticed students gravitate towards cultural cuisines, such as the kabobs found in the C4Cs Persian station. To satisfy these cravings, Kardys and team devise ways to serve creative, ethnic foods. In Sewall, for instance, the dining staff is looking into creating a ramen bar. Once a month in the C4C, a few of the cooks on staff from El Salvador create a special dish from their homeland.

“One of the best ways to celebrate culture and diversity is through the use of food,” said Golden.

One of the main challenges in producing a quality eating experience is the sheer volume of diners who come through the doors each day. Around 15,000 meals are served daily on campus, says Houle. As CU’s enrollment expands, Kardys is expecting to break 10,000 meals a day served in the C4C this fall, up from the 5,500-7,000 average meals a day served in previous semesters.

Helping serve all these people are 400 student workers. Some are dishwashers, while others sauté food on the cooking line. Working in the C4C dessert station is one of the more coveted positions, said Kardys.

During the school year, food leftovers are scarce because everything is made in batches, said Kardys. In any event, all leftovers are put in a kitchen pulper, which dehydrates the food, and then is composted. In times when there is a lot of extra food, during the holiday closure, for instance, everything is donated to Community Food Share in Boulder County.

In early August, just two weeks before CU’s largest ever freshman class — about 7,200 students — arrived on campus, there was a jovial air in the C4C. Chefs tested recipes, jokes abounded among workers and a buzz of anticipation filled the room. The staff prepared to unveil new menus for the first time in five years.

“I love my job,” says Kardys. “Food is what brings everyone together.”