When Ted Mulcahey arrives on campus for work at 6:30 a.m. each day, all is quiet. He prefers it that way. Silence makes his job easier.

He enters an empty concert hall or practice room, sits at a piano and begins to play.

He always starts with the chromatic scale, listening for the slightest flaw. When he hears it, he pulls the keys from the piano for a closer look.

As CU Boulder’s senior piano technician, Mulcahey, 45, can handle any aspect of piano maintenance. It’s been his work for 20 years, and he’s seen it all, from Carnegie Hall to Macky Auditorium.

“Even though I’m not a musician for a living,” he says, “music is still my life.”

Sometimes the fix is just a matter of pinpricking a key’s felt hammer. Other times it means rebuilding the instrument. When Mulcahey finishes with a piano, he’ll sometimes play a quick tune by Liszt, Chopin or Schubert. Then it’s on to the next piano.

Mulcahey began studying classical music in 1986, received a piano performance degree from Western Washington University, then taught privately. He didn’t enjoy it, tried his hand at insurance sales, then worked for a boat dealership. One day he made a snap decision.

He hopped on his motorcycle and made for Iowa, where he enrolled in a technical school, earning a diploma in piano tuning and repair. He was hired by a Steinway & Sons dealer in Ohio.

After three months, he found himself at Steinway’s New York headquarters, working in the company’s Queens factory and in Steinway Hall in Manhattan.

“In New York, they stick you in a room that’s around 10 feet by 8 feet and they have you tune the same piano every day, all day,” Mulcahey says, adding that he tuned the same piano for a little over a month. “They used to say that they would fire you if you got caught using an electronic tuning aid.”

His job at Steinway took him into renowned performance spaces. One of nine company concert technicians, he worked in Carnegie Hall, Alice Tully Hall at Lincoln Center and the Blue Note Jazz Club in Greenwich Village. He met and serviced pianos for famous musicians, including Billy Joel. A photo of him and Alfred Brendel, one of the world’s greatest living pianists, hangs in his campus office.

But the city’s appeal was short-lived.

Mulcahey returned to the West and, after doing private piano services near Portland, Ore., came to CU in 2013, ready for the vitality of a college community and ample Colorado sunshine.

As an employee of the College of Music, he works on up to six pianos a day. He prioritizes the college’s three concert pianos, which must be tuned daily, because variations in the weather and amount of use affect their sound. He also focuses on the pianos in the grand piano practice rooms, which take a pounding: Students play them up to 12 hours a day.

Mulcahey’s relaxed demeanor belies the care and intensity that he brings to his job. He holds himself and others to the same rigorous standards he learned at Steinway.

In New York, they stick you in a room that’s around 10 feet by 8 feet and they have you tune the same piano every day, all day.

“He’ll be a hard critic when needed, no punches pulled here,” says Timothy Wirth, Mulcahey’s former assistant and now head piano technician at the University of Wyoming. “The quality of my work is up a notch or four because of [it].”

Mulcahey will go anywhere on campus where a piano is about to be put to the test: The music college hosts about 400 concerts a year, and there are 120 pianos on campus, 17 in Macky alone.

His favorite piano on campus, “No. 1,” is one of CU’s four nine-foot Steinways, which cost around $150,000 each for a base model. No. 1 is on the Grusin Music Hall stage, and Mulcahey’s fondness for it comes from the time he spent rebuilding it from the bottom up for improved sound and performance levels. This included adding new keys, a pinblock, which grips the piano tuning pins, and strings.

Rebuilding pianos is a Mulcahey specialty and takes up most of his time when he’s not servicing the ones in use. A piano has 12,000 parts, he explains, and they wear out over time and need to be fixed or replaced.

“It’s not like a violin where it gets better over time,” he says.

Music is an interest outside work too. Rock groups like Pink Floyd and Led Zeppelin dominate his personal playlists, along with folk and jazz musicians such as Patty Griffin, Neil Young, and Gene Harris. Acoustic panels line the walls of his Longmont apartment, and diffusers and tube amps litter the main room. Building stereos is his main hobby.

Even for a Grammy Award-winning group, playing all 17 Beethoven quartets in live concert is an act of daring. Takács Quartet likes a challenge. END_OF_DOCUMENT_TOKEN_TO_BE_REPLACED 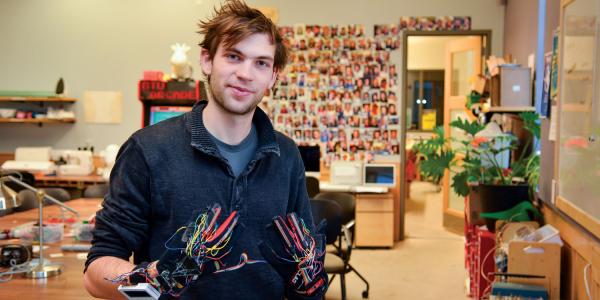