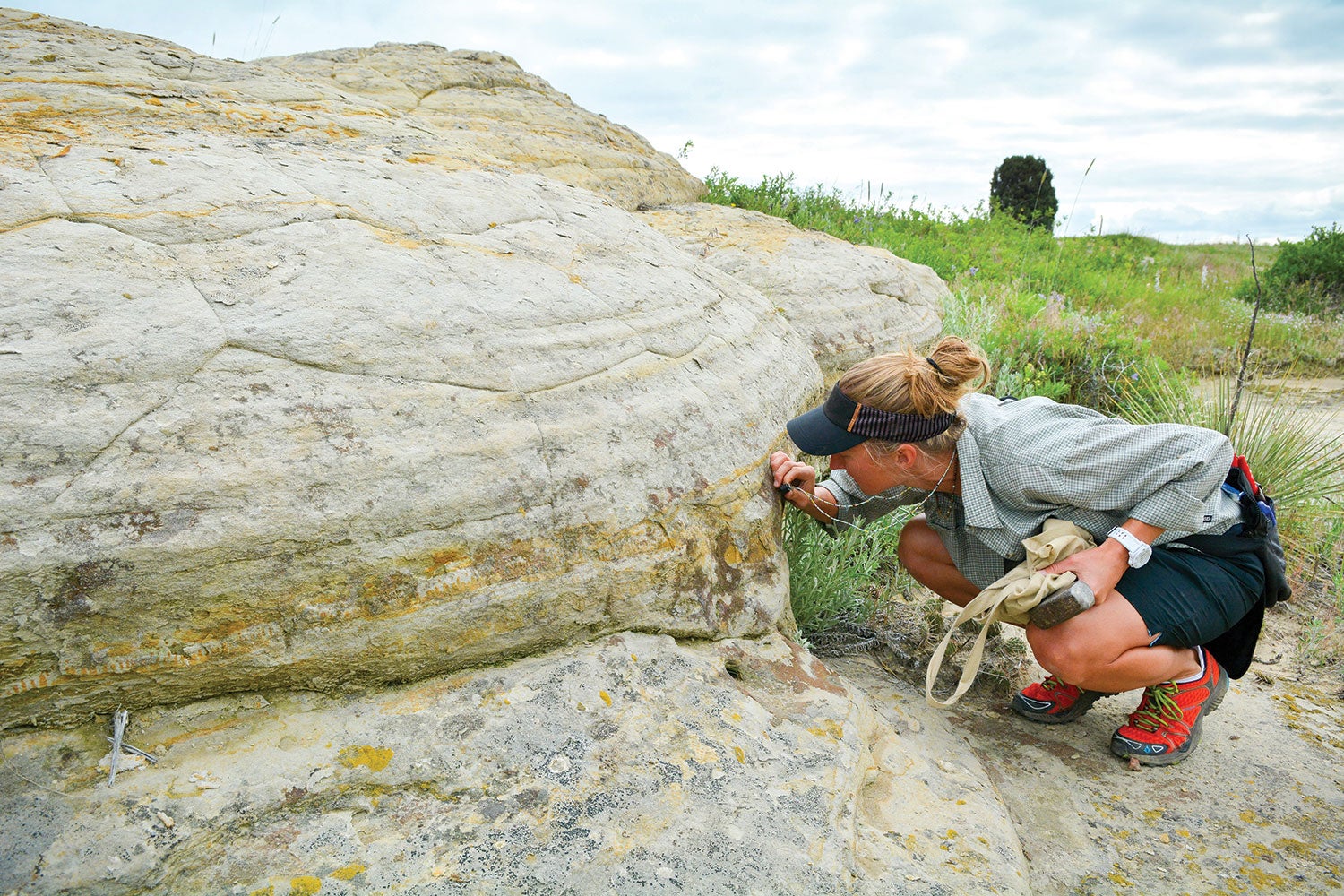 Even amid a massive die-off of life on Earth that’s been called “the sixth extinction,” scientists continue to discover new species. CU-Boulder biologist Erin Tripp recently found two previously unknown species of lichens — in the same location in the same week. She was participating in a joint lichen inventory at Boulder’s White Rocks Nature Preserve with the City of Boulder’s Open Space and Mountain Parks Program.

Can we safely say you were pleased?

I am always pleased when I’m in the field collecting lichens or plants. Life really doesn’t get any better than spending a day with ‘endless forms, most beautiful,’ in Darwin’s words. Biologists create our own adventure.

How did these lichens catch your eye?

Chance had it that the first rock I wandered towards hosted a curious lichen with a thick white thallus and raised, black fruiting bodies. From about five feet away I honed in on this curiosity. Later I happened to pause near a sandstone formation while my graduate student Vanessa Díaz (MMusm’16) was photographing a Xanthoparmelia. I glanced down between my feet and noticed a beautiful crustose species with a chartreuse thallus. I suspected both [lichens] were special, perhaps unknown to science, and I was right.

What is a lichen, by the way?

A lichen is a symbiotic relationship between a minimum of two unrelated organisms, primarily a fungus and a green alga. But lichens often host a diversity of other organisms too — they’re a microcosm and a source for evolutionary innovation. They are most commonly confused with mosses. Here in Colorado, lichens are everywhere!

How did you determine the lichens you found were new species?

Finding new species of anything biological comes with several prerequisites, in particular a long history of studying a group of organisms in detail. Reaching a point where one feels confident enough to describe a new species is by no means a trivial process: It takes a lot of work, a lot of experience, a lot of grit and a lot of drive to learn and keep learning.

Are there lots of species?

There are about 20,000 named lichens and thousands more to be described. No lichenologist has ever fully treated the lichens of Colorado, but my guess is that there are at least 1,500 species present in the state.

I first started noticing lichens while working on my undergraduate degree in biology at the University of North Carolina-Asheville. I am a huge fan of the southern Appalachians — a refuge for biodiversity and general happiness in North America. Lichens are majorly understudied and underappreciated. Lucky for us, lichens are also extremely diverse and abundant in Colorado. Curiously, lichens are perhaps more poorly understood in Colorado than in just about any other state.

Tell us more about these newest lichens. What did you name them and how did you pick the names?

The names came to me almost instantaneously! I named Lecidea hoganii after Tim Hogan and Candelariella clarkiae after Dina Clark. Tim and Dina are the two collections managers of the University of Colorado Herbarium. The new Lecidea is ‘dark and complex, but a little rosy on the inside,’ sort of like Tim’s personality, whereas the new Candelariella is ‘bright and sunny,’ just like Dina’s disposition.

And what did you do with the new ones you found?

I accessioned them into our museum. There they will ‘live’ comfortably in perpetuity with other ‘type specimens’ — specimens selected to serve as a reference point of sorts for the species.

You said there are many other lichen species awaiting discovery…

Absolutely and without doubt! There are appallingly few scientists who are actively working on lichens. Here in western North America I can count those individuals on one hand. Such a small number of practicing professionals makes for slow progress, but also high potential for discovery. I predict no fewer than 50 (and probably closer to 100) species of lichens new to science right here in Colorado.

How do you keep yourself busy when you’re not hunting for lichens?

When I can piece together time to do other things, it usually involves items such as trail runners, topo maps, benchmarks, racquets, power tools, binoculars, derailleurs, pressure cookers or some really, really great lines of poetry.

A novel antioxidant may help us turn back the clock as our arteries age, says CU-Boulder doctoral student Rachel Gioscia-Ryan. END_OF_DOCUMENT_TOKEN_TO_BE_REPLACED

American adults don’t sleep enough: On the average work night, we come up 30-90 minutes short of what our bodies need for long-term health, according to a poll by the National Sleep Foundation. END_OF_DOCUMENT_TOKEN_TO_BE_REPLACED