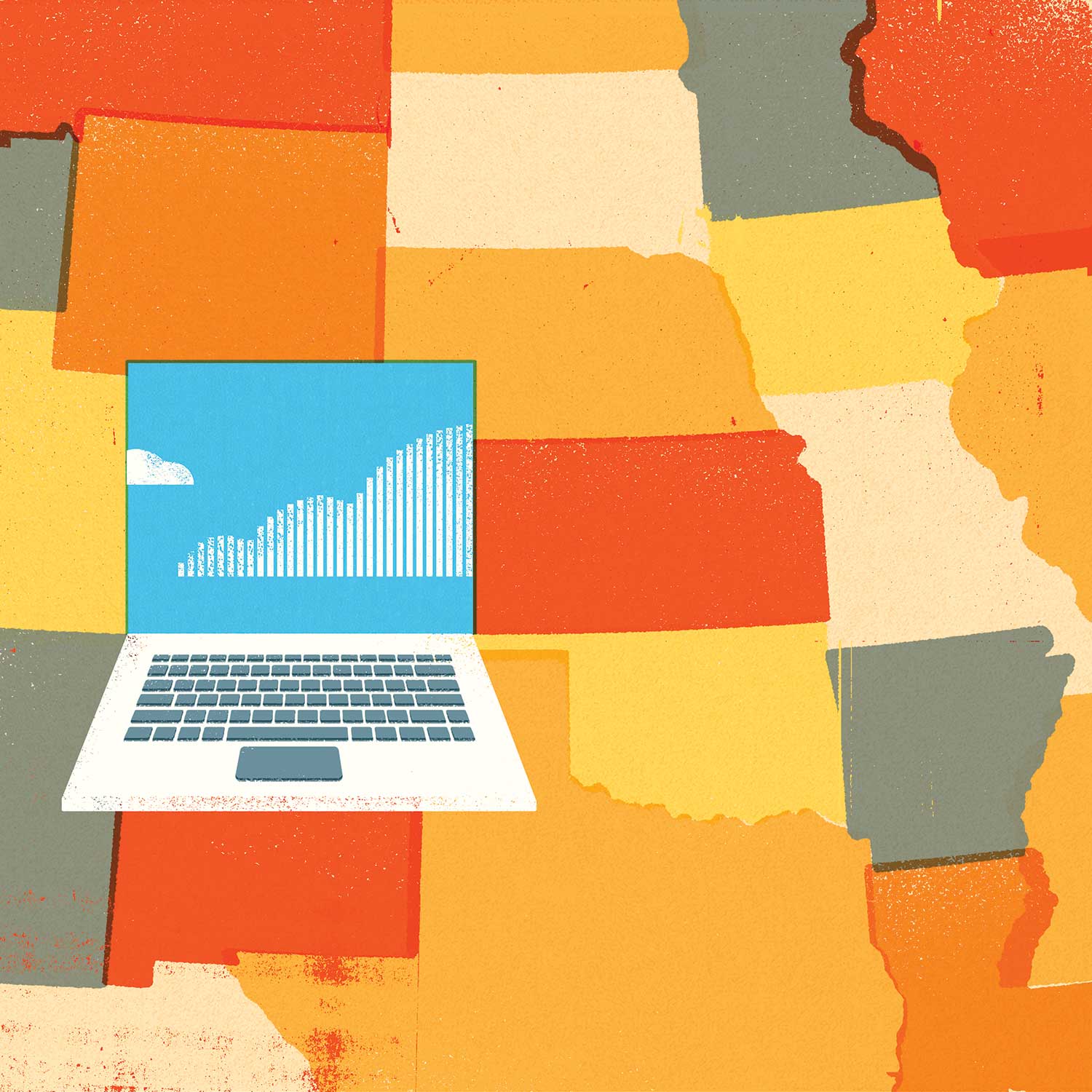 When she asked for her own computer at age 10, her father, an electrical engineer, helped her build it from scratch.

“I really like solving puzzles and building things,” says Dykstra, who declared a computer science major as a sophomore and serves as a learning assistant for the department.

In between her classes Monday through Friday you can find her in a windowless room deep within the engineering center helping newer students distinguish a function from a scripting language or recognizing the difference between proofs by induction from proofs by contradiction. Lately she never lacks for company — computer science enrollments at CU-Boulder are exploding.

“We have booked every big classroom on campus,” says Jim Martin, chair of the computer science department. “Muenzinger Auditorium, Chem 140, Math 100, we’re using them all.”

Four years ago there were 267 undergraduate computer science majors. In the fall of 2014 there were 909. Weeks into the semester, students in introductory courses were sitting on the stairs of some of the largest lecture halls on campus, unable to find a chair. There were 650 students enrolled in Introduction to Computer Science alone.

The enrollment surge, which at CU began in earnest in the fall of 2013, shows no sign of rolling back, and Martin and his colleagues are delighted about it — they just need to find more space and resources. All of CU-Boulder’s computer science courses are taught by 34 professors and instructors, up 20 percent in the time enrollment has nearly doubled. 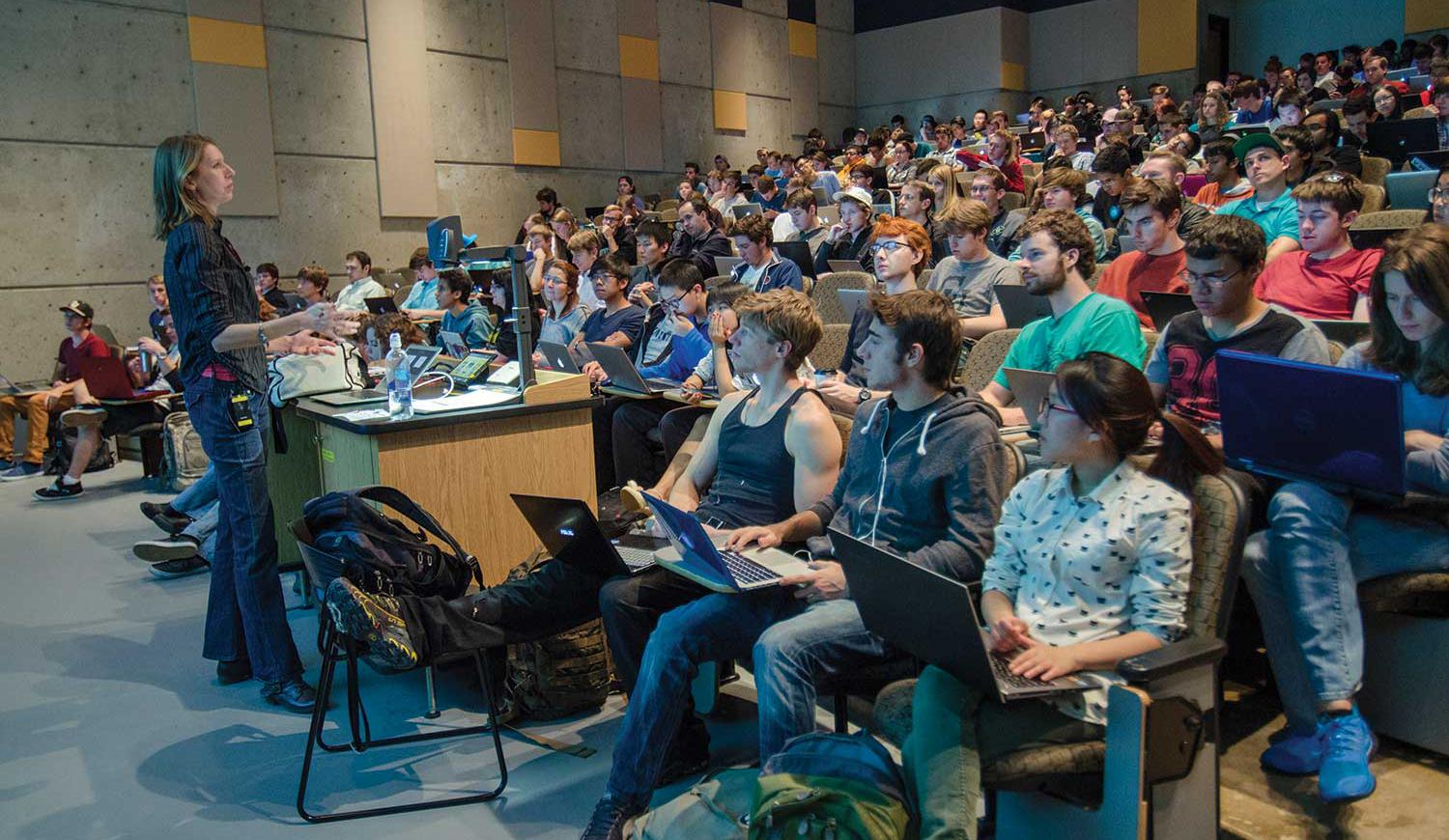 For one, Martin says, students and their parents have come to appreciate the presence of computers virtually everywhere and they’re aware of the ample and often lucrative career prospects available to those with advanced computer skills. Also, universities are making computer science courses available to a greater variety of students.

The only graduating students who don’t have a job by May are the ones who aren’t looking.

Many schools — including the University of California Berkeley, the University of Washington and CU-Boulder — have created computer science programs intended to appeal to students in the liberal arts as well as in science and engineering, broadening the pool of potential majors, Martin says.

At CU-Boulder, the dramatic increase can be attributed in part to a new bachelor’s degree in computer science for students in the arts and sciences college. Prior to its fall 2013 creation, students had to be admitted to the engineering college to major in the field.

“We realized that we wer missing a large population on this campus where computing could have been a perfectly reasonable thing for them to study, but they didn’t view themselves as engineers,” he says. “Part of that process was trying to create a degree that the industry, our alumni base and graduate schools would look at and say, ‘Yes, these people are bona fide computer science graduates.’”

The students from both colleges take classes together from the same instructors. The only difference is the required coursework outside the major, such as writing and literature classes for B.A. students and math and humanities classes for B.S. students.

When the B.A. was introduced, about 50 arts and sciences students were expected to sign up. But 450 students took the introductory course.

“We had a boatload of people change majors, even fifth-year students,” Martin says. 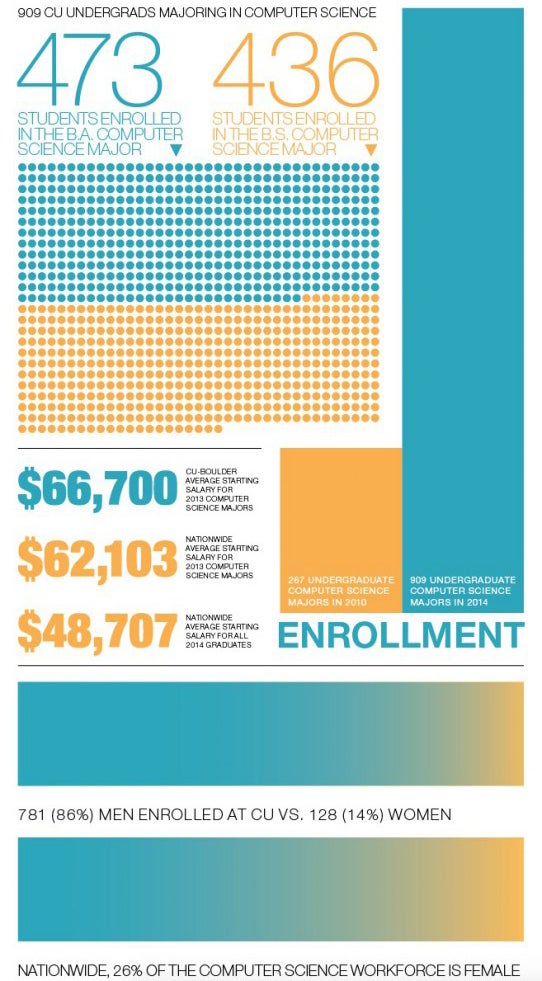 Without question, computer science is practical: “Students and parents have become more aware of what’s possible in certain careers,” says Rhonda Hoenigman, a CU computer science instructor who teaches a section of the introductory class. “It’s a valuable skill to know something about coding.”

The average starting salary for all 2014 graduates nationwide was $48,707, according to the National Association of Colleges and Employers; the average for computer science majors was $62,103. A small survey by the CU computer science department indicated that its 2013 graduates earned $66,700 on average.

Some CU computer science graduates work for computing giants such as IBM, Microsoft, Google, Facebook or Twitter, Martin says. Others join one of the numerous Boulder startups such as QuickLeft, Ready Talk or Gnip, which is now part of Twitter. Many become software developers — tackling front-end computer problems about user navigation or user experience, for instance — while others focus on hardware.

Students and parents have become more aware of what’s possible in certain careers. It’s a valuable skill to know something about coding.

“The only graduating students who don’t have a job by May,” he says, “are the ones who aren’t looking.”

Despite booming computer science enrollments, the field continues to attract more men than women at CU and nationwide. Racial minorities also continue to be underrepresented.

As chair of the CU Women in Computing group, Dykstra has noticed a slight increase in women attending its events the past year, but it’s still obvious there are far fewer women than men. This fall 781 men and 128 women were enrolled in the B.A. and B.S. undergraduate computer science degree programs.

Nationwide, 18 percent of computer and information science undergraduate degree recipients were women in 2012, according to the CU-Boulder-based nonprofit National Center for Women and Information Technology (NCWIT). In 2013, women made up 26 percent of the computing workforce.

“As a society, we’re more aware of the lack of diversity in technology and the implications of this problem,” says Adriane Bradberry, communications director for NCWIT. “Now, we need to work on making computing entry points more inclusive for women and minorities.”

Organizations like NCWIT and the National Science Foundation (NSF) are working hard to address this issue by helping its members build the capacity to implement change, raise awareness and reach out to critical populations, Bradberry says. Efforts include offering informal computing opportunities to K-12 students and equipping businesses and universities with tools — such as help creating unbiased job descriptions and consultations with academic departments — to recruit and retain more women in their computer science programs.“We want to tackle the problem at every single point on the pipeline,” she says.

At CU-Boulder, gaining and retaining women in computer science is a top goal, Martin says, and a direct motivation for offering the B.A. degree. To further encourage women to consider computing, Martin wants to see more awareness of the fact that computer science can be a complement to many careers in biology, social science, the humanities and other fields.

Dykstra aspires to work on software development and design after graduation. Eventually she’d like to teach.

Illustration by The Heads of State; Photography by Glenn Asakawa

While traveling the world to understand everything there is to know about caffeine, Murray Carpenter uncovers some shocking surprises. END_OF_DOCUMENT_TOKEN_TO_BE_REPLACED 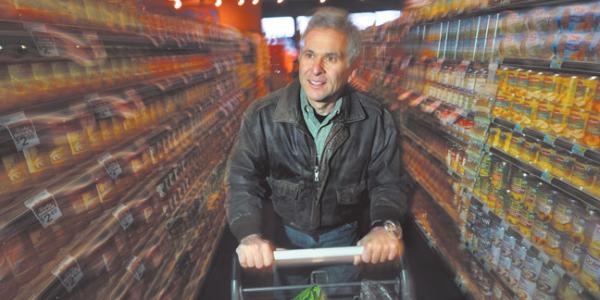 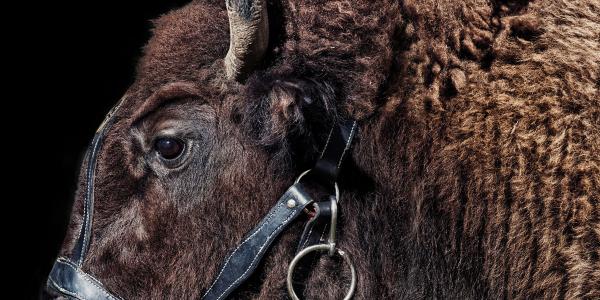 The buffalo who became Ralphie I arrived in Boulder in 1966. In 1967, her Folsom Field performances took root in CU culture. END_OF_DOCUMENT_TOKEN_TO_BE_REPLACED