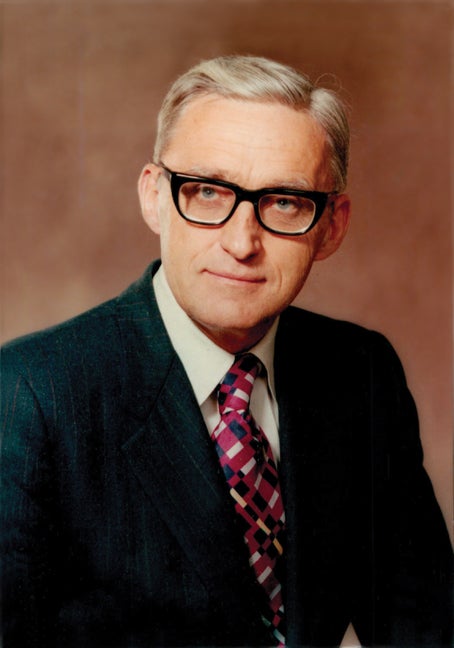 A tireless attorney, CU professor, carpenter and water gardener, Clyde Martz passed away on May 18 at home in Albuquerque, N.M., after a long illness. He was 88. Martz taught at the CU law school from 1947 to 1962, writing the first natural resource law casebook. He saw the big picture, pioneering a new area that creatively combined water law, mining law and oil and gas law.

Born on Aug. 14, 1921, in Lincoln, Neb., he received his bachelor’s degree from the University of Nebraska where he was president of his fraternity. His time at Harvard Law School was interrupted by service on the submarine USS Tilefish during World War II. He married Ann Spieker in 1947, the same year he received his law degree from Harvard. He and Ann were inseparable until her death in 2004.

During his 15 years as a professor at the CU law school, he published the first natural resources law casebook, Cases and Materials on the Law of Natural Resources. Martz also helped found the Rocky Mountain Mineral Law Foundation and was a guest professor at several other law schools.

He departed CU in 1962 to join the Denver-based Davis Graham & Stubbs law firm. Clyde was also a dedicated public servant who served in what arguably are the two most eminent positions for any natural resources lawyer, assistant attorney general of the lands and resources division of the U.S. Department of Justice (1967-69) and U.S. Department of the Interior solicitor.

During this time he was involved in a dispute involving the treaty fishing rights of the Yakima Indians as well as one involving condemnation of lands needed for the NASA facility in Cape Canaveral, Fla., and numerous mining claim cases. In 1987, Colorado Gov. Roy Romer (Law’52, HonDocHum’06) appointed Martz his natural resources director, calling him one of the nation’s top lawyers.

In 1982 Martz helped found CU’s Natural Resources Law Center to promote intellectual discourse over crucial natural resources law and policy issues and foster practical and effective solutions to problems. The center is best known for its ground-breaking work on management and conservation of the West’s water resources.

Part of being a giant in the field of natural resources law was his mentoring of so many students and young lawyers.

“Those of us who had the honor of working with Clyde,” says Natural Resources Law Center director Mark Squillace, “will long remember him for his dedication and passion for the practice of law, and for the support that he gave us as we began our careers.”

Martz had a son and a daughter with whom he spent a great deal of time. He climbed the Third Flatiron and Grand Teton with Robert Martz and rode horses with Nancy Martz. All through his life but especially when he retired he built innumerable gardens and ponds. A creative and prolific carpenter, he built several additions to the family home by himself. A carpenter indeed.

Marc Killinger is assistant editor of the Coloradan.