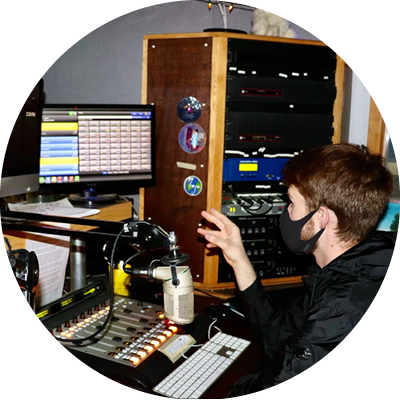 Beneath the daily commotion of the University Memorial Center, Radio 1190’s eclectic community gathers to share music, connect with a live audience and uncover overlooked stories. Poster-lined walls and bookshelves housing thousands of CDs decorate the lounge in the tucked-away campus radio station, which has created the soundtrack of CU for the past 30 years.

CMCI senior John Boughey is the station’s news director and the host of its twice-weekly program, News Underground. Appointed to the job a month before the COVID-19 pandemic, Boughey had to quickly exchange his microphone for Zoom interviews.

“I felt like, if I don’t take it, I don’t know who will,” he says. “I’m definitely looking forward to doing it without the restrictions, once we can do it safely.”

As an advertising strategy student, Boughey wasn’t initially drawn to the journalistic aspect of radio shows. But he fell in love with Radio 1190’s underground community and the live element radio brings.

This year, he hopes to use the station to energize students who weren’t able to fully experience campus during the pandemic.

“A big part of this station is just the space itself,” he says of the station formerly called KUCB. “There are a lot of different opportunities to get into journalism here. I would recommend coming down and giving radio a shot. I know it can help a lot for people who need experience interviewing or with public speaking.”

In addition to his work with Radio 1190, which includes weighing in on financial decisions as part of its Air Board, Boughey is the audio editor for CU Boulder’s latest student news outlet, The Bold. He also honed his audio skills off campus as a radio and community intern at Denver Open Media in summer 2020.

Boughey’s most memorable interview was with Deb Halland, who became the first Native American Cabinet secretary when President Joe Biden appointed her secretary of the interior in 2021.

He appreciates the flexible format of radio, which allows for the type of in-depth and long-form interviews that are his specialty. The audience gets to hear the whole story, which is not always possible through print interviews, he says, and unlike pre-recorded podcasts, radio hosts are able to speak directly to their audience in that moment.

“That live element is important because it reminds you that there is a human there,” he says.

Boughey describes his college experience like a great moment of live radio: “Blink and you’ll miss it.”