When Sophia Bragaglia ​​(StratComm, Econ’21) decided to enroll in the Social Media Listening course the last semester before graduation, she had no idea it would lead her on a path to become a data strategist at a world-renowned advertising agency. 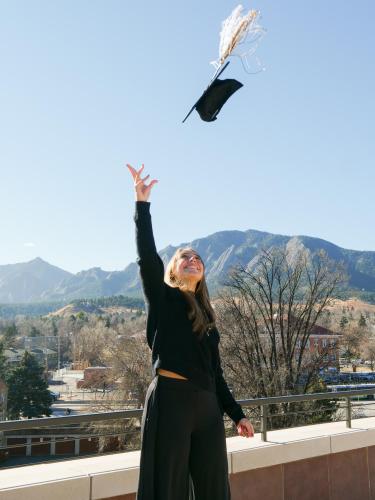 Throwing a cap: Sophia Bragaglia, who graduated in 2021, has already used lessons from CMCI classes on social media, marketing and public speaking in her job at a world-renowned advertising agency.

The unexpected journey began when Bragaglia approached Chris Vargo, the associate professor who taught the course, to follow up on his offer to students: “He was always like, ‘If you ever need help, I’m always a message away,’” Bragaglia said.

After meeting with Bragaglia about her job hunt, Vargo began helping her network with agencies. Their efforts paid off: After five rounds of interviews, Bragaglia was hired by the award-winning advertising agency Grey Global Group.

In her role as a data strategist, Bragaglia often conducts research to understand consumer behavior and how her clients’ brands can have a role in people’s lives, she said. With a dual degree in strategic communication and economics, the position is a perfect blend of her talents, and it allows her to demonstrate the power of communicating in an ethical way.

“The main department that I work in is strategy, so I do a lot of research—a lot of digging into how people are behaving, how the market is functioning and what would be a good message to put out there right now,” she said. “I love it.”

Transitioning into her new role was intimidating at first, but thankfully, she developed transferable skills as an undergraduate student that prepared her for success, such as learning how to conduct independent research and to craft impactful stories.

One of her favorite classes was on public speaking, which she took during her first year in Buckingham Hall as part of CMCI’s Communication and Society Residential Academic Program.

“It really helps you build an argument and sustain it, and I really liked it,” she said, recommending other students take the course as well.

Among the most useful skills she developed in her classes was learning how to use marketing and research databases, such as the database Mintel.

“That really, really helped me because I use that at my job, but nobody [here] taught me how to do it,” she says. “If I hadn’t learned it in college, I wouldn’t know how to do it.”

Learning wasn’t limited to the classroom. During her undergraduate career, Bragaglia completed advertising internships with Ogilvy Brasil, Banco Itaú and Repense, all in her native country of Brazil.

“I knew what I wanted in the second agency because I had had the first experience,” she said. “I also chose my job based on that, as well, because I got to really understand what type of position is meant for me.”

In addition to her internships, Bragaglia gained real-world experience by getting involved in on-campus organizations. One of the highlights was working as the director of outreach for TEDxCU, a student-led organization that independently organizes and hosts TED events.

“That was really exciting because I got to apply everything I learned in classes to the real world, and it was something I really cared about,” she said.

With each experience, Bragaglia paved the way for her current career, and it all started with her decision to attend CU Boulder.

Her family is originally from Brazil, but her dad fell in love with Boulder when he first visited the area as a young adult. Throughout her childhood, her dad took her and her brother skiing around Boulder. She always admired the beauty of the campus. Once it came time to choose a school, CU Boulder felt like the right fit, she said.

“It seemed like it would be the place that I was going to be the happiest,” she said, explaining that her creative side drew her toward the strategic communication major. She added economics soon after her first semester began.

“And everything just worked out so perfectly.”