Bundled up against the frigid wind, I gripped the handlebars of the borrowed snow machine through thick gloves and steered it out onto the icy Yukon River. I shifted my weight on the seat, careful not to let my microphone and recorder fall out of my bibs where I had tucked them away to shield against the battery-killing cold.

My camera bumped against my chest as I accelerated along the frozen waterway, speeding by the Yukon's famous white bluffs and snow-covered forests. A large chunk of jumble-ice appeared in the otherwise glassy river, causing me to swerve and re-right myself on the snow machine. A fit of spontaneous, involuntary laughter shook my entire body. Journalism is really fun.

There are a few things specific to sub-Arctic reporting that I wish I had learned in grad school: for example, the basics of snowmachine steering and how to avoid frostbite when photographing sled dogs in temperatures 40 below zero. Even that pens, which freeze, are essentially useless for writing in such conditions. Perhaps a class in creative ways to hide recording equipment in ski bibs, or a course in canine interviewing could have made me feel more fully prepared.

Then again, some things are best learned in the field.

This winter, I traveled up to Alaska to follow the Yukon Quest sled dog race, a 1,000-mile event that traverses Alaska's interior into the Canadian Yukon. I was working as a reporter for KUAC radio in Fairbanks and filed twice-daily radio reports on everything from canine care to Canada's largest cinnamon rolls.

Working with dogs was a dream.

Alaskan huskies are so sweet, intelligent and playful.  The only drawback? I wasn't allowed to pet them. This required a constant exercise in self-control.

"They're athletes," one musher reminded me, "you wouldn't try to pet Ussein Bolt, would you?"

That depends, Ussein Bolt is a lot less cuddly than the average sled dog.

Reporting on the race was very much trial by fire, or well, ice. With limited radio experience, I was expected to produce two pieces a day on deadline, and find some semblance of wireless internet to file stories. I was constantly on the move, following the race from Fairbanks into the Alaskan bush, taking aircrafts smaller and shakier than my decrepit sedan into the Canadian Yukon. I chased the pack leaders for 17 days on the trail, sleeping in public schools, my truck and kind strangers' cabins.

A lot of things I learned in grad school did come in handy. File management, naming conventions and backing things up saved the day more than a couple times.

And then there were the things I could have only learned through experience: I learned how to drive a snow machine, how to ride on the back of a sled and how to make caribou tacos. I figured out how to flag down a bush plane while standing on a frozen runway and spot roadside moose while driving at night--look for the eyes. I learned a lot about mushing; the strategy behind racing, sled set-ups, canine nutrition and innovative ways to use hand warmers.

I've spent two years in my master's program learning everything from multimedia and data journalism to media law and ethics. Now, two months out from graduation, it felt like the perfect time to find out, can I do this thing I've been studying? Will I like it? Will I be good at it?

The answer came to me in a bush plane as I was crossing the border from Alaska into Canada.  The wobbly bush plane skirted thrillingly close to the tops of the forested mountain ranges, buffeted slightly by the wind. It was just me and the pilot, a gruff but polite Canadian.

"So, what do you do?" he asked as we soared over the frosted pines and expansive mountain ranges.

The headsets that allowed us to communicate over the dull roar of the engine crackled as he responded, "Huh, it kind of seems that's what you're doing now."

Zoë Rom is a Boulder-based writer and journalist and a second-year master’s student in the Department of Journalism at the College of Media, Communication and Information. When she's not running, she's climbing, and when she's not climbing she's cooking or eating.

Southern storyteller turned mountain-dweller, she starts every day with a cup of strong coffee and a good story. Her work has appeared in REI Co-op Journal, Discover, Rock & Ice, Trail Runner, Backpacker and Threshold. 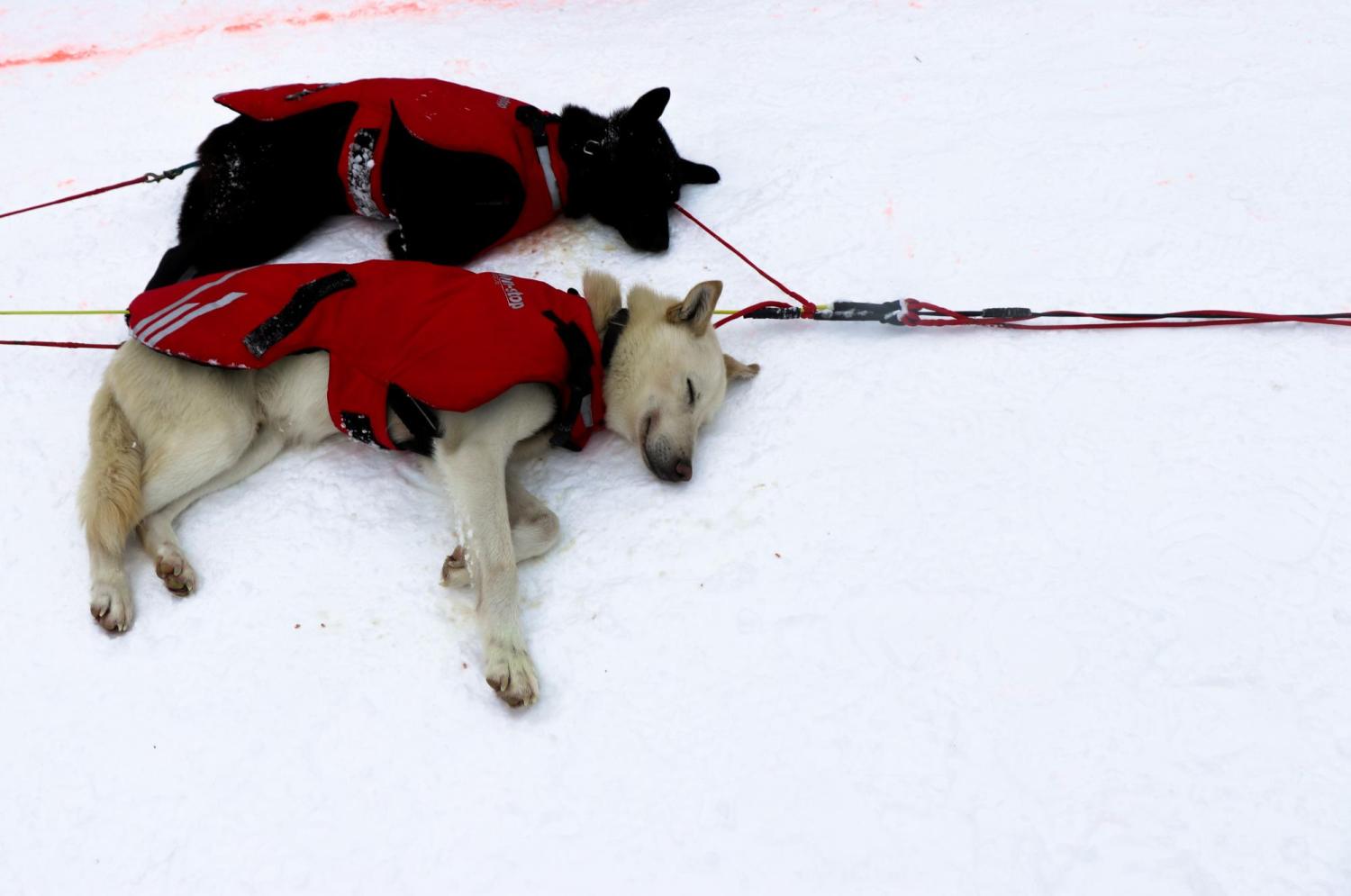 Dogs fall asleep after crossing the finishline in Whitehorse, Canada. 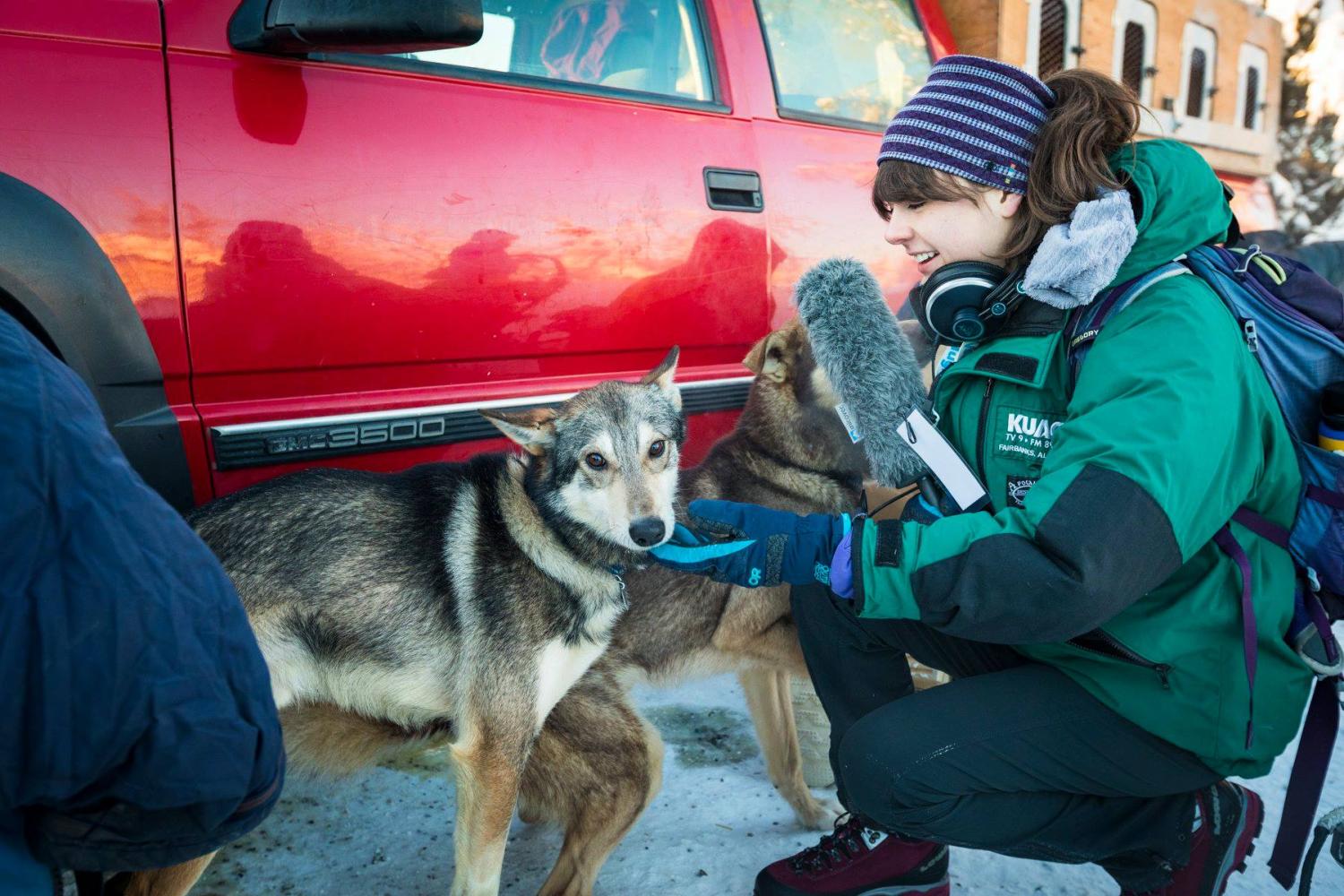 Here I am bonding with one of my favorite dogs, Black Sabbath. 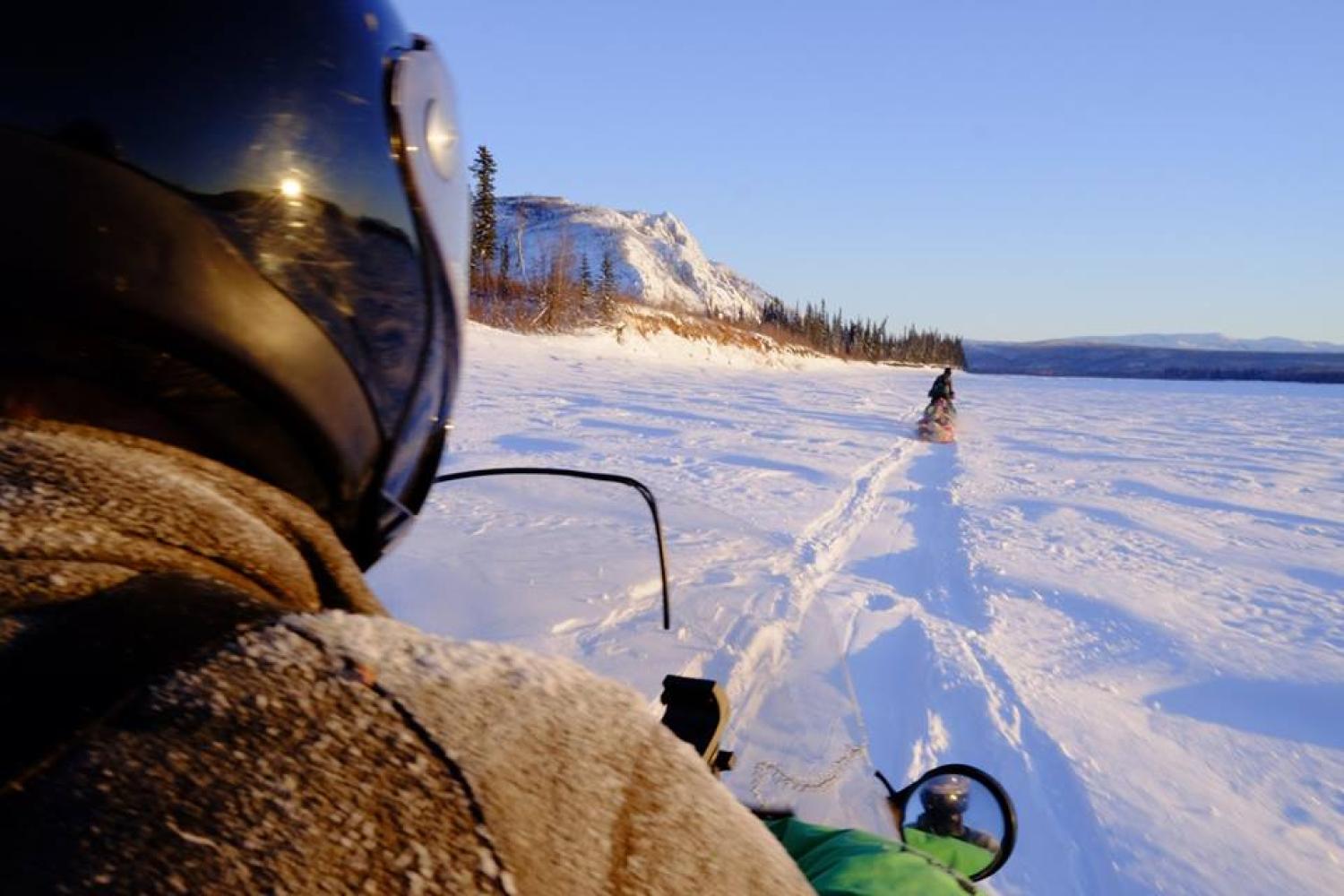 Dogs lead the way on the 1,000-mile Yukon Quest sled dog race.
Return to the top of the page