Preheim stands near the Demilitarized Zone, where she learned about the history of North and South Korea from soldiers stationed in the area.

Cheryl Preheim (Comm’95) is a veteran reporter and news anchor who spent 18 years at 9News Denver before moving to a sister station, WXIA, in Atlanta, Georgia.

PyeongChang was the fourth Olympic Games I’ve covered in my career. I’ve covered London, Sochi, Rio and PyeongChang—each one is unique and memorable.

I’m always inspired by the people we meet and the countries we have the opportunity to explore. I’ve found Team USA athletes have such a pure love of their sport and a sincere desire to be a part of something bigger than themselves. They inspire me.

A few Olympians may become household names and enjoy lucrative sponsorships, but the majority will not become wealthy or famous. That isn’t why they pursue their dream. They simply love competing and being on a team. They put careers on hold or work side jobs to fund their training. They spend time away from family and friends to travel the world competing. They may only get their stories told once every four years when the Olympics come around. Yet, they love nothing more than pushing themselves to a physical limit and representing all of us.

Getting to know the athletes is one of my favorite parts of covering the games. Adam Rippon was such a fun interview. One of the bobsledders, Lauren Gibbs, picked me up off my feet to demonstrate her background as a power lifter. She and Elana Meyers Taylor later sang “Happy Birthday” to one of my four children when she found out I was missing his birthday covering the Olympics.

Preparing for the Olympics is a process that takes months. There are a lot of logistics to work through before the trip. For example, we organized all the gear we need and shipped it months in advance, got Korean currency and got customs documents in order.

I had an external hard drive full of video, interviews and music that was organized so it was easy to access as needed. That was critical as we got into our long days--in South Korea we worked an average of 17 hours-per-day—and fast deadlines. During our month-long trip, we produced, wrote, shot and editted our own stories before doing our live reports. The next deadline was always just a few hours away.

An experience that impacted me greatly was the opportunity to visit the Demilitarized Zone and see the line of demarcation between North and South Korea. Spending time with the soldiers stationed there and learning more about the history of the divide between these countries and the current political climate was fascinating and sobering.

I will never forget standing at the border and looking toward the hills of North Korea. I heard speakers playing music and propaganda. As a journalist, it was a reminder of why we do what we do. I thought about the 25 million people in North Korea who live with no access to information other than what their government shares to strengthen its own narrative. I felt very fortunate to be a journalist in a country where holding the powerful accountable is expected of the press. I was reminded of the importance and power of fair, objective, balanced and accurate journalism and why it must be our goal each day and a cornerstone of democracy.

I cannot say enough about the hospitality and kindness of the people we met in South Korea. I absolutely loved meeting them, along with visitors and athletes from all over the world. Covering the Olympics is a special assignment and an adventure I will never forget. 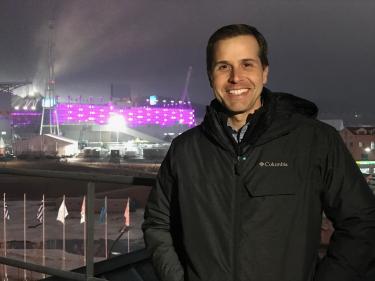 "Our PyeongChang offices had an unbeatable view overlooking the Olympic Stadium. This is the spot where we did many of our TV standups for ABC News affiliates across the country."—Alex Stone

Alex Stone (Jour'03) is a national correspondent for ABC News Radio who is based in Los Angeles, California.

What did it mean for you to cover the Olympics? What inspired you?
It’s always exciting to cover the Olympics! To see the best of the best from around the world compete in one space is exhilarating to watch. And we can’t forget, so many of the Winter Games athletes live in Colorado. To see Red Gerard and Lindsey Vonn do their thing was pretty incredible.

This year’s Olympics added the extra geopolitical component that made coverage that much more interesting. We saw the beginning of what appears, for now at least, to be a thawing of relations between North and South Korea—and potentially North Korea and the U.S.  Before flying out I got to visit the Demilitarized Zone, which was a moving experience. To look beyond the border into North Korea is something I will never forget. It's always a huge honor to cover the Olympics.

What surprised you about your experience?
We were told before heading to PyeongChang that it gets cold. I thought I knew cold from my time in Boulder. But it was so much worse than I expected. The wind chill had the daytime temperature at -15 degrees Fahrenheit—with 50 mile-per-hour winds for a few days.

I wrote a story for abcnews.com about how cold it was and people called me a wimp and said it’s the same as winter in the Dakotas. Trust me, it wasn’t the same. That high mountain cold with 50 mph winds—plus sometimes you’re standing still for a while in it—is something else. But once the winds died down and the temperatures came up, it was amazing how pleasant 30 degrees above zero felt. It felt like summer. Oh, and one more surprise was the amazing dumplings. I am now having dumpling withdrawals. 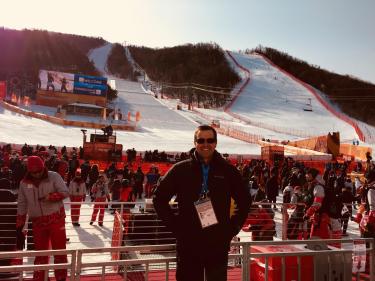 "When time allowed, our team would head out to catch an event or two. On this day we were able to watch the giant slalom."—Alex Stone

How did you prepare?
For physical comfort I bought cold weather gear and boxes and boxes of hand warmers. But that aside, all of us who head to the Olympics for ABC News do as much research as we can.

Because most of us are not sports reporters, it means studying up on athletes and sports that we don’t cover day in and day out.  A great example is curling. The U.S. men’s team, which won gold, has a fascinating story to tell about falling out of grace in Sochi and then fighting back to win gold this year. It’s important to know the stories beyond the big names like Lindsey Vonn and Shaun White when heading over. Of course, their stories are a huge part of our coverage as well. And since ESPN is part of our Walt Disney Company family—their studios are always close by and we can rely on them for help.