Women's Dress in Archaic Greece: The Peplos, Chiton, and Himation 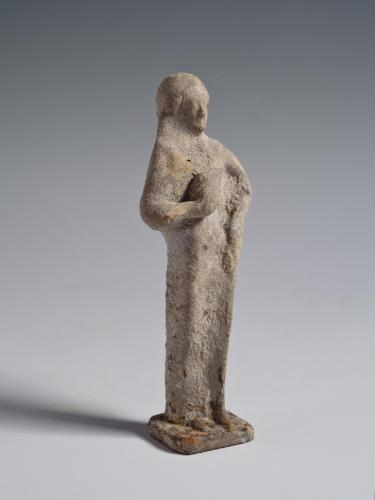 Women in ancient Greece are the subject of much interest to scholars and students of the ancient world. Not only did their status and freedoms change drastically throughout time, but so, too, did their representations in art and literature. Most of these representations, however, were created by men, so much of what we know about women's daily lives, including wool-working and washing, relationships, and their virtues, is filtered through their prejudices and expectations. It can be challenging, then, to separate fact from fiction when trying to understand the lives of ancient Greek women who had little voice of their own. Although changing and often conflicting representations of gender can confuse our understanding of the social roles of women, representations of women in art may at least answer some of our questions about women's physical appearance, specifically their clothing, throughout Greek history.

Archaeological remains, including representations of goddesses and mortal women in statues, vase paintings, and figurines, provide key evidence about the importance of clothing, jewelry, and other cosmetic embellishments in ancient Greece. Clothing, for example, is a product of culture and is therefore unique to the period in which it was fashioned. Representations of such chronologically significant details like clothing styles, then, making material culture an important avenue for studying cultural change (1).

In order to understand changes in women's dress during the Archaic Period in Greece (8th century - 480 B.C.E.) we must look first at trends immediately preceding this period. In the Bronze Age cultures of Minoan Crete and Mycenaean Greece, for example, "women wore a short-sleeved jacket cut so low in front as to leave the breasts exposed, and an ankle-length skirt decorated with flounces" (2). This particular style is not represented by art in the Greek collection at the University of Colorado at Boulder Art Museum, but can be seen represented in a faience statuette of the Minoan Snake Goddess from Knossos (Crete). We do not know how common this style of dress was, but this tailored costume is unique to Bronze Age civilizations in Greece and is easily distinguishable from the dress worn by women represented in art from later periods of development.

Art in the Archaic period in Greece shows a dramatic transformation in women's clothing, as demonstrated by a mid-6th century B.C.E. terracotta figurine in the CU Art Museum's collection (pictured here). After the Late Bronze Age, women's clothing lost its fitted, revealing appearance and took on the form of simple, "rectangular pieces of cloth draped to the figure and held in place with pins or brooches" (3). There were countless variations on women's clothing during this period depending on regional popularity and large-scale trends over time. The three main items of clothing, however, were the peplos, the chiton, and the himation that were combined and re-combined in a variety of ways. These items of clothing were often elaborately colored and patterned, which added to the variety of apperances women could have.

The peplos, also known as the Doric chiton (4), is the earliest known item of Archaic Greek women's clothing. It first appears in art after the collapse of the Mycenaean culture and in the transition to the Iron Age. The sleeveless peplos was made of a rectangular piece of cloth, usually of a heavier, woolen fabric, which was folded first in half around the torso and beneath the arms. The top was folded down to form an overfall or "apotygma." With the body centered between the two sides of the peplos, the garment was then pinned over both shoulders with clasped brooches called fibulae, which had many different forms. Additional brooches could pin the cloth down along the arm to create sleeves.

There were multiple types and arrangements of the peplos, including the open peplos, which was left open to show the leg on one side, and the closed peplos, sewn on both edges to conceal the sides of the body (5). A closed peplos can be seen on the caryatid statues on the Erechtheion on the Acropolis of Athens, dated to the later 5th century B.C.E. (6). Peploi were often brightly colored and patterned. Reconstructions of the Peplos Kore (c. 530 B.C.E.), for example, show a woman wearing peplos brightly colored with reds, greens, and blues.

The chiton, also known as the Ionic chiton (7), is usually understood as a later modification of the peplos (8). Appearing by the middle of the 6th century B.C.E., the Ionic chiton is a notable combination of Greek and Eastern influences and can be seen as yet another example of the influence of the Orientalizing Period in Greek history (9), which was a result of increased interaction between the Near East and Greece during the Archaic period. The shift in popularity from the Doric peplos to the Ionic chiton and what motivated it was a source of speculation for the 5th century B.C.E. historian Herodotus (Histories 5.87.3).

Like the peplos, the chiton was fashioned from a single sheet of material folded across the body. The garment could be sewn completely along the top of the arms, leaving only a small hole for the head or neck (10). Alternatively, the chiton could be left sleeveless and, like the peplos, be pinned just over the shoulders. Unlike the heavy wool peplos, however, the chiton was made of a lighter material, such as linen or silk, and it had no distinctive overfall element at the top.

The chiton lost favor to the peplos again in the 5th century B.C.E. This has been attributed, in part, to the Persian Wars in the early 5th century B.C.E. This invasion of Greece by the Persians could have prompted an new aversion to anything considered Eastern (11). The new 5th century B.C.E. peplos differed from its earlier version, however, in that it was created from a less substantial woolen fabric and had a long overfall on one side (12). A particular variation on the later peplos, called the Peplos of Athena, is depicted in statues of the goddess with a longer overfall at the top and an extra fold or pouch of cloth draped underneath (13). This trend, as expected, was later discarded, again in favor of the chiton.

The himation is the last of the three major categories of clothing found during the Archaic period in Greece. It is best described as a cloak or mantle and was usually worn on top of a chiton or peplos, not instead of them. There are many different types of himatia, but all are depicted either being worn over both shoulders or, as a "transverse himation," with just on one and draped diagonally across the torso (14). Himatia survived the changes in clothing styles during the Archaic period but were more commonly worn over Ionic chitons in the transverse himation style (15).