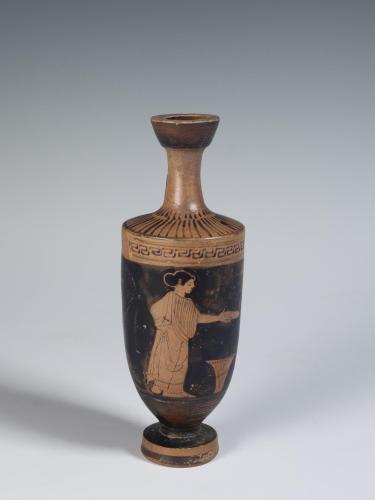 We can learn a lot about ancient people and cultures by studying the pots and other material remains of the past. The shape, decoration, and findspots of vases, for example, can provide us with information about the person or people who produced, used, and discarded them. Decoration adorning Greek vases, in particular, is a productive and interesting avenue for studying and understanding ancient Greek culture. We must exercise caution, however, because there is more than one way to read the stories depicted in these scenes.

Women and scenes showing women's work in general became a more common decorative theme on pots in the late 6th century B.C.E., when vase painters began using the red-figure technique of vase painting. In these scenes, women can be seen engaged in a variety of activities, including fetching water from a fountainhouse and chatting with other women, at work in the house spinning wool, and tending to children. It is important, however, to remember that while scenes of women's daily life were becoming more popular, we cannot extrapolate directly from them that women's status or freedoms within society had increased or changed.

There are many ways that an image can be read. An image of a woman could, perhaps, represent the specific woman who purchased and used the vase, akin to a portrait. Alternatively, the picture could instead represent a generic woman engaged in culturally sanctioned activities, a proper Greek woman behaving just as she should. When considering the images of women on vases in the CU Art Museum's or other collections, we must account not only for the prejudices and expectations of the ancient producers and consumers of these images, but also for our own modern perspectives. What an ancient Greek man or woman, child or adult, citizen or slave saw in an image was probably very different from what we see today. Complicating matters, we cannot even assume that all ancients saw images in the same way, as a scene may have read differently to a man than to a woman.

Scholars sometimes argue that you can determine the function of a vessel by its decoration. We can see a good example on a hydria in the Toledo Museum of Art painted in the black-figure technique of vase painting. On this water jug, we see a fountainhouse scene: women linger near a water spout and talk with one another as they collect water. It does seem, in this case, that the function of the hydria, a jug for collecting and storing water, relates directly to its decoration. But is there another possible reading of this scene than as an exact replication of a woman's daily activity? The lives of ancient Greek women were apparently relatively restricted: they were expected to stay inside the house and could only leave if accompanied by a male escort or while tending to their work. Could it be, then, that women saw such a depiction of a fountainhouse scene as potential for freedom and liberation from the restrictions of their lives? According to this interpretation, the image is much more charged and the the water itself is an unimportant decorative element, making the correspondence between the function of the hydria and its decoration almost coincidental.

Three vases in the CU Art Museum's collection illustrate women and, for this reason, they are assumed to have been used by women. A 4th century B.C.E. red-figure pelike, for example, depicts a woman's head on both sides. Because the women are heavily adorned with jewelry, we assume that they represent wealthy, elite women. A 5th century B.C.E. red-figure lekythos (pictured here) shows a woman pouring a libation from a shallow bowl, which she holds over a basket for holding yarn. The associations between these actions and religious piety and wool-working assigns this woman in the realm of a respectable citizen woman. Finally, a late 6th century B.C.E. black-figure lekythos shows a woman under a grape arbor, playing a double-flute or aulos for a reclining male companion. Women in the presence of men, drinking, and music, three important components of the aristocratic (male) symposium, are often -- rightly or wrongly -- identified as non-citizen women and sometimes as courtesans or prostitutes.

As a group, these three vases in the CU Art Museum's collection show women in stereotypical settings. Given the multiple meanings of imagery, however, we must try to be fair to the ancient viewers of the scenes. That is, we must not assign our own ideas of what ancient life was like to the images. At the same time, we must not read the images and functions of the vases at face value.