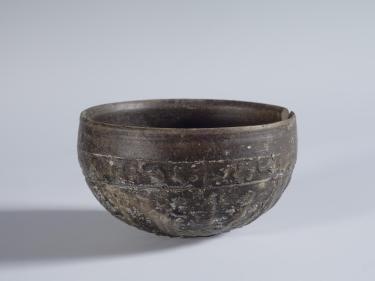 Many artistic changes took place in the Greek world during the Hellenistic period, defined as the three centuries between the death of the Macedonian king Alexander the Great in 323 B.C.E. and the Battle of Actium in 31 B.C.E., when the Roman general Marcus Antonius (Marc Antony) was defeated by his rival Octavian, who later became known as Augustus, the first emperor of Rome. After the death of Alexander the Great, the vast territory he conquered was divided into several independent kingdoms ruled by his top generals, allowing for the greater mingling of cultures and an increased demand for art to decorate royal palaces and important cities. Greek art evolved to reflect the changing world of the Hellenistic period, exploring drama, realism, emotion, and decorative effects (1).

The most important changes in the pottery of Greece during the Hellenistic period involved a desire to emulate the luxury of the new ruling class, a trend toward baroque detail, and a contrasting tendency toward simpler decoration. The red-figure technique of vase painting of the 5th and 4th centuries B.C.E. largely gave way to new techniques and styles, such as mould-made relief pottery, exemplified by a 3rd or 2nd century B.C.E. bowl in the CU Art Museum's collection. These mould-made vessels may have been intended to imitate metal vessels used by the elite (2). Though not pottery, an especially elaborate type of tableware known as the Gold Glass bowl (also called the Gold Sandwich bowl) is worthy of mention in this context because it exemplifies a type of vessel that contemporary pottery styles may have been intended to imitate. These bowls, including an example in the British Museum, were made by pressing a thin layer of gold leaf between two glass bowls that were made to fit together exactly. The gold leaf was intricately cut and carefully placed to produce exquisite products (3). The floral designs typical of these bowls may have influenced not just mould-made pottery, but also contemporary metal relief bowls (4).

Painted pottery continued to be produced and polychrome, or multi-colored, vases became popular. These vessels were often much more vibrantly colored than the older red-figure style from which they derived. Along with bold new colors, pottery itself became more daring: applied decorations like statuettes and other three-dimensional additions either enhanced or replaced painting on some vases. These vessels are often found in burials and may have been made specifically for that purpose (5).

Less colorful pottery was produced, as well, much of which appears to imitate contemporary metal vessels. One common type of pottery is called West Slope Ware and was produced in Athens.This was a more simply decorated style, with light painting on a dark surface (6). A new vessel shape called the lagynos became popular. This shape, exemplified by an example in the Metropolitan Museum of Art, had a tall neck and a single handle for pouring. Lagynoi were usually decorated simply but in a dark-on-light color scheme, which is different from West Slope Ware vessels (7). The lagynos, too, may have been an imitation of metalwork (8).

The new shapes and styles found in Hellenistic pottery imitated the opulent materials of the new kings and queens, especially metal, in obvious and effective ways. A new desire for ornate, almost fantastic decoration echoed the elaborate sculpture and architecture of the period (9). Like all art, Hellenistic pottery is a reflection of its time, an invaluable resource for attempting to understand ancient life.