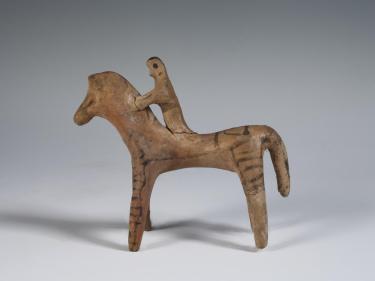 This vase is one of a collection of Greek artifacts held by the CU Art Museum.

Description: Small terracotta figurine of a horse with a legless rider on its back. Buff clay with details added in black.

Additional photos of this figurine show details of the decoration and various elements of the horse and rider. 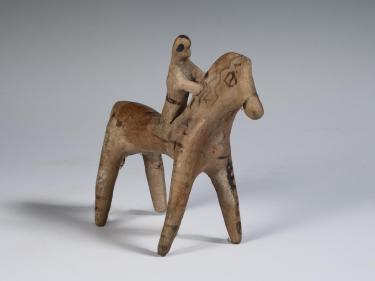 This small handmade figurine of a horse and rider is probably from Boeotia in central Greece and dates to the mid-6th century B.C.E. (1). The horse has a simplified form, with simple tapering cylinders for legs, a cylinder for a tail, a relatively flat neck and head, and a cylinder muzzle. A rider is positioned on the horse's back, with two simple arms attached to either side of the horse's neck. The rider has no legs, but its body is merged with the horse's back. The rider's head is simple, with a pinched nose. Decoration on both horse and rider is added in a blackish-brown slip. A ladder-like pattern runs down each of the horse's legs; a horizontal black line winds around the horse's body at the level of the top of the legs. Tail appears to be entirely black. On the horse's back is a relatively thick black line, running transverse across the loin, with a square, in outline, added on the croup. The ridge of the horse's mane is painted black, with stylized wavy strands of hair added down the sides of the neck. Stylized eyes are added to either side of the horse's face and a black line runs transverse across its muzzle, perhaps representing a bridle. No ears are indicated in molding or painting. The rider has a black line indicating perhaps a belt around its waist. Irregular black dots indicate the rider's eyes, and a black line runs along the top ridge of its head, down its back along the spine.

The simplicity of the figurine is its most notable feature. Despite the lack of details, however, the subject is immediately recognizable. The artist has managed to catch the spirit of the horse and rider through very basic shapes and patterns, rather than an accurate representation. The stripes on the horse's body, while clearly not anatomically accurate, add interest and even a sense of movement to the figure, which would otherwise be quite plain.

Horses were an important feature of ancient Greek life and are represented in figurines, sculpture, and other forms of art, including vase painting. Horse-and-rider figurines, like this one, were popular in 6th century B.C.E. Boeotia (2). Terracotta figurines, which were probably quite inexpensive, may have been used as toys for children, as offerings to the dead, or as votive dedications at religious sanctuaries (3). Popular, too, were figurines depicting other animals, real or imagined, as well as human figures and goddesses, all of which themes are represented in the CU Art Museum's collection. An early 6th century B.C.E. figurine of a harpy displays an interest in representing human-animal hybrids. A 6th century B.C.E. East Greek figurine may represent the goddess Aphrodite. Two others, a mid-6th century B.C.E. Boeotian figurine and a contemporary example from Laconia, represent female figures, but it is unclear if they are human or divine.