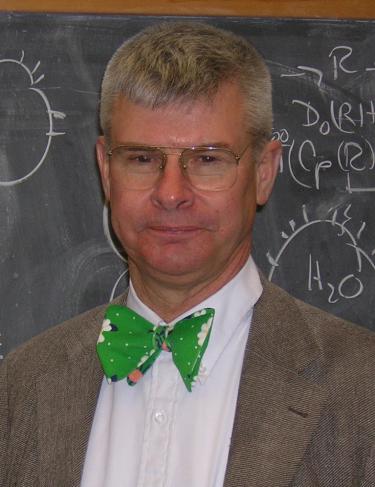 Barney Ellison teaches Organic Chemistry at the University of Colorado at Boulder. He took an undergraduate degree at Trinity College (Hartford, CT) where he studied biology. Upon graduation in 1965, he wanted to understand the action of antibiotic drugs in cells, so he matriculated to the Department of Pharmacology in the medical school at Yale University. Following two years of graduate work in Pharmacology, he switched to the easier subject of chemistry. He studied for a Ph.D. in organic chemistry at Yale under the supervision of Professor Ken Wiberg and earned his degree in 1974.

In order to explore the dynamic correlation of electrons in organic molecules, Ellison accepted a postdoctoral appointment with Prof. Bill Reinhardt. Reinhardt had just moved from Harvard out to JILA in Boulder, Colorado. While working with Reinhardt’s group, he met Carl Lineberger and participated with the experimentalists to study the negative ion photoelectron spectroscopy of the simplest carbene anion, CH2-. Following his postdoctoral stay at JILA, the Department of Chemistry at the University of Colorado offered Ellison a faculty position in 1977 as an Assistant Professor of organic chemistry. He is now Professor of Chemistry and Biochemistry.

While at the University of Colorado, Ellison has developed a research program to study organic reactive intermediates. He uses a) negative ion photoelectron spectroscopy, b) matrix isolation FTIR spectroscopy, c) flowing afterglow SIFT (Selected-Ion Flow Tube) mass spectrometers to study the dynamical properties of polyatomic organic ions and radicals. In the last few years, he has become interested in the atmosphere and the organic chemistry of aerosols. Consequently he is trying to understand the radical-induced oxidation of hydrocarbon films.

The University of Colorado promoted Ellison from Assistant Professor to a tenured Associate Professor in 1983; he was promoted to the rank of full Professor in 1988. He lives in Boulder, Colorado, and is married to a Chemist and patent attorney, Dr. Sally A. Sullivan. They have two children, Nicholas and Samantha.

A full list of publications is available at http://www.colorado.edu/chem/ellison/papers.html