Bradley J. Birzer was the VIsiting Conservative Scholar for the 2014-2015 academic year. He is the co-founder of The Imaginative Conservative and Russell Amos Kirk Chair in History at Hillsdale College. Dr. Birzer is author of American Cicero: The Life of Charles Carroll, Sanctifying the World: the Augustinian Life and Mind of Christopher Dawson, J.R.R. Tolkien’s Sanctifying Myth: Understanding Middle-earth, co-editor of The American Democrat and Other Political Writings by James Fenimore Cooper, and co-author of The American West. He is author of The Humane Republic: The Imagination of Russell Kirk (forthcoming, University Press of Kentucky).

Bradley J. Birzer has been appointed the second Visiting Scholar in Conservative Thought and Policy, the University of Colorado Boulder announced today. 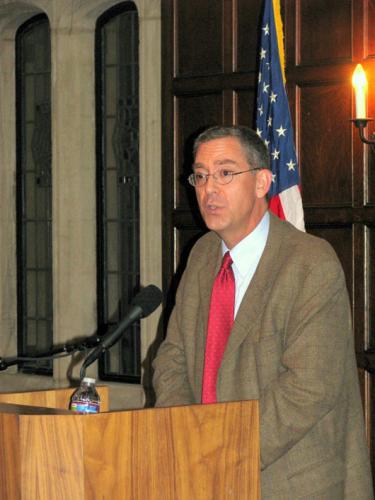 Birzer, a professor of history and the Russell Amos Kirk Chair in American Studies at Hillsdale College in Michigan, will begin his one-year appointment beginning in fall 2014.

“Dr. Birzer brings impressive breadth to CU, primarily in the discipline of history as well as areas of literary significance,” said Steven R. Leigh, dean of the College of Arts and Sciences at CU-Boulder.

Birzer’s works range from American political history to the religious symbolism of J.R.R. Tolkien, Leigh noted. “He will offer our students excellent opportunities across the full range of his expertise.”

Additionally, he will be encouraged to foster discussion by hosting public events in the campus community and perhaps around the state. Steven Hayward, the inaugural visiting scholar, organized more than a dozen guest speakers, debates and other public appearances during 2013-14.

Birzer is enthusiastic about his new post. “To say I’m thrilled about the year appointment would be an understatement,” he said.

Birzer has been teaching at Hillsdale College, a small and traditional liberal arts school, for 15 years and said he has some of the best students and colleagues in the whole of academia. “I’m also very much in line with the core and the mission of the college, color blind and gender neutral since its founding by abolitionists in 1844.”

“This said, I’m very eager to try my hand teaching at a major research university. I can think of none better than CU-Boulder, and I’m deeply honored to be a part of it for the coming school year,” Birzer said.

Birzer added a few words about “Conservative Thought and Policy.” He said the most important thing for anyone who dons the “conservative” mantle is to ask, “What is it we hope to conserve?”

“To my mind, being a conservative has little to do with politics, but instead has much to do with identifying and preserving excellence in art, culture, literature and scholarship. It means to identify and conserve the particular talents, dignity and freedom of each individual and, where possible, to connect all persons across time from the beginning of things to the end.”

With respect to policy, Birzer finds much political discourse wanting. That’s one reason he and close friend Winston Elliott founded The Imaginative Conservative blog in 2010.

“Unfortunately, much of what’s promoted as conservatism today is really jingoism, nationalism, egoism and consumerism in its appearance and essence,” Birzer said. “In terms of debate, thought, writing style and varied viewpoints, The Imaginative Conservative is one of the best websites in existence. To me, it is a model for how conservatives should approach scholarship and thought: not through rigidity, puritanism, fundamentalism and ideology, but ecumenically through real and sustained dialogue.”

“What Elliott has shown me through our joint venture is what I hope to contribute to CU during my time there, adding another voice to an already lively and deep conversation.”

Birzer holds a Ph.D. in history from Indiana University. His books include “American Cicero: The Life and Times of Charles Carroll,” “Sanctifying the World: The Augustinian Life and Mind of Christopher Dawson,” “J.R.R. Tolkien’s Sanctifying Myth: Understanding Middle-earth” and “The American West,” which was co-authored with Larry Schweikart.

For several months, an advisory committee has worked to identify candidates for the visiting-scholar position. The committee has sought a “highly visible” scholar who is “deeply engaged in either the analytical scholarship or practice of conservative thinking and policymaking or both.”

Carlos offered high praise for Birzer: “I am delighted to have Dr. Bradley Birzer as the next Visiting Scholar in Conservative Thought and Policy. He brings a wealth of teaching experience and a conservative humanist perspective that will benefit the college.”

“I welcome Professor Birzer to the University of Colorado Boulder and look forward to his contributions to our community as the second Visiting Scholar in Conservative Thought and Policy, ” said CU-Boulder Chancellor Philip P. DiStefano. “The coursework, discussions and panels he will organize will continue to foster inquiry, debate and civil discourse on the campus, and our community will benefit from these exchanges.”

The Visiting Scholar in Conservative Thought and Policy is a pilot program supported by private funds. More than 20 donors have raised $1 million to support the program.