HELD REMOTELY: William B. Allen: Down with Diversity

William B. Allen's lecture Down with Diversity on April 13, 2020 will now be held remotely at 7 p.m. MT (please note new time).

You must register for this event via Eventbrite. After registration, but prior to the event, you will receive an email with information on how to access the lecture.

The diversity regime has left higher education and much of the western world wandering in una selva oscura. Nor will we find our way clear of the self-seeding sprouts of identity politics until we renounce once and for all and intellectual indefensible and morally unsustainable commitment to diversity.  The Benson Center theme for the 2019-20 academic year is "American Identities."  It is fair to say, however, that the theme says too much by saying too little.  That is, it announces an identity plurality without suggesting a foundation on which the plurality stands on anything more substantial than an "America" undefined. Thus, from e pluribus unum to ex unius plures has become a more likely prospect than any distinct national character. In this exploration we will weigh those prospects with an eye toward charting a path forward. 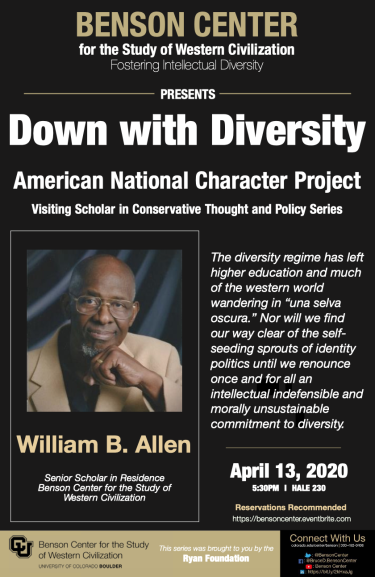 William B. Allen is emeritus dean, James Madison College and emeritus professor of political philosophy at Michigan State University. Dr. Allen was the 2018-19 Benson Center Visiting Scholar in Conservative Thought and Policy and is a Senior Scholar in Residence for 2019-20. He also served previously on the National Council for the Humanities and as Chairman and Member of the United States Commission on Civil Rights. He was previously the Ann & Herbert W. Vaughan Visiting Fellow in the James Madison Program on American Ideals and Institutions at Princeton University and Visiting Senior Scholar in the Matthew J. Ryan Center for the Study of Free Institutions and the Public Good at Villanova University. He is an expert on liberal arts education, its history, importance and problems. He is also Chairman and co-founder of Toward A Fair Michigan, whose mission was to further understanding of the equal opportunity issues involved in guaranteeing civil rights for all citizens, and to provide a civic forum for a fair and open exchange of views on the question of affirmative action.

He has published extensively, most notably, George Washington: A Collection, George Washington: America’s First Progressive , The Personal and the Political: Three Fables by Montesquieu, Re-Thinking Uncle Tom: The Political Philosophy of H. B. Stowe, Habits of Mind: Fostering Access and Excellence in Higher Education (with Carol M. Allen), The Essential Antifederalist (with Gordon Lloyd, ) and The Federalist Papers: A Commentary. He served previously on the National Council for the Humanities and as Chairman and Member of the United States Commission on Civil Rights.

Dr. Allen is the organizer (with Colleen Sheehan) and concluding speaker in the Benson Center's 2019-20 American National Character lecture series. The Benson Center promotes critical reflection on the distinctive traditions and political perspectives that characterize Western civilization. It encourages residents of Colorado and the United States to more fully understand and appreciate their past, their future and a free and creative American society within an international environment.