EVENT CANCELED: Daniel J. Mahoney: Between Religion and Pure Democracy: Tocqueville and the American Character Then and Now

Daniel J. Mahoney’s lecture, scheduled for Tuesday, March 10, has been canceled due to concern with the coronavirus. The talk will not be rescheduled this spring.

With the help of Alexis de Tocqueville’s Democracy in America (two volumes, 1835 and 1840) and his numerous letters written from North America, Daniel J. Mahoney will explore some tensions in the American character that have only been exacerbated since Tocqueville’s time. Americans, Tocqueville shows, were and are dedicated to material gratification, free government, a religiosity at once vague and substantial, and abstractions that owe more to pure democracy than republican self-government. And yet they are a free and decent people. Can this equilibrium hold or will pure democracy win out over the best “republican" features of the American character? Please register for this event via Eventbrite. Free and open to the public. 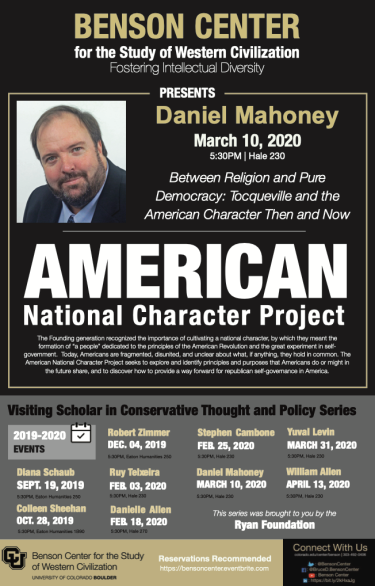 Daniel J. Mahoney holds the Augustine Chair in Distinguished Scholarship at Assumption College, where he has taught since 1986. He is a specialist in French political philosophy, anti-totalitarian thought, and the intersection of religion and politics. His books include The Liberal Political Science of Raymond Aron (1992), De Gaulle: Statesmanship, Grandeur, and Modern Democracy (1996), The Conservative Foundations of the Liberal Order (2010), and The Other Solzhenitsyn: Telling the Truth about a Misunderstood Writer and Thinker (2014). He is executive editor of Perspectives on Political Science and book review editor of Society. In 1999, he was awarded the Prix Raymond Aron. He received his BA from the College of Holy Cross and his MA and PhD from Catholic University of America in political science.

About the American National Character Series

The Benson Center promotes critical reflection on the distinctive traditions and political perspectives that characterize Western civilization. It encourages residents of Colorado and the United States to more fully understand and appreciate their past, their future and a free and creative American society within an international environment. Conservative Thought and Policy Guest Speakers bring a unique perspective as guests of the Visiting Scholar in Conservative Thought and Policy program. This year’s series, the “American National Character Project,” expands on the Benson Center’s 2019-20 theme, American Identities.