UPDATE: Due to high demand, this lecture has been moved to the University Memorial Center's Glenn Miller Ballroom. Please note that this event has a no bag policy and all other containers or purses are subject to search. Due to limited capacity, registering via Eventbrite is recommended.

Join the CU Boulder Benson Center for the Study of Western Civilization for an evening conversation with human rights advocate, New York Times best-selling author and expert on Islam, Ayaan Hirsi Ali.  “It has been said that education opens the mind, while indoctrination closes it. A good education permits one to think critically, and to consider multiple viewpoints." Ayaan Hirsi Ali joins those who have been sounding the alarm on the closing of the American mind. Sponsored through a generous donation from The Abby and Douglas Brown Family Foundation. Please register via Eventbrite. 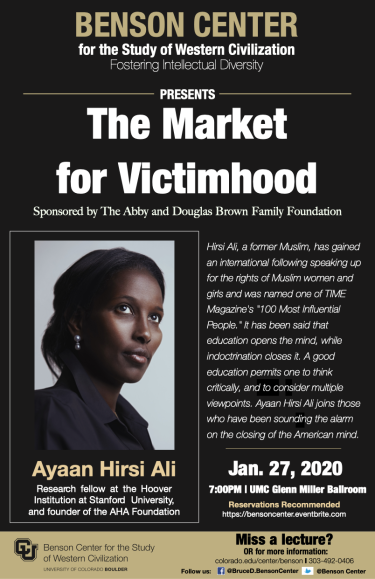 Ayaan Hirsi Ali, a former Muslim, has gained an international following speaking up for the rights of Muslim women and girls.  Named one of TIME Magazine's "100 Most Influential People," one of the Glamour Heroes, and one of Reader's Digest's "Europeans of the Year," Hirsi Ali is a true advocate in the fight against violence to women and young girls.

Hirsi Ali is a Research Fellow at the Hoover Institution, Stanford University and founder of the AHA Foundation. She served as a Member of the Dutch Parliament from 2003 to 2006. While in Parliament, she focused on furthering the integration of non-Western immigrants into Dutch society, and on defending the rights of Muslim women.

She has written several books including Infidel (2007); Nomad: From Islam to America, a Personal Journey Through  the Clash of Civilizations (2010); Heretic: Why Islam Needs a Reformation Now (2015); and The Challenge of Dawa (2017). Her next book, Prey, will be published by Harper Collins in 2020.

Prior to joining the Hoover Institution, she was a Fellow at the Belfer Center’s Future of Diplomacy Project at Harvard University, and a Resident Fellow at the American Enterprise Institute in Washington, D.C.

She received her Master’s degree in Political Science from Leiden University in the Netherlands.