Matt Jensen: "Rent stabilization is one of my core missions" 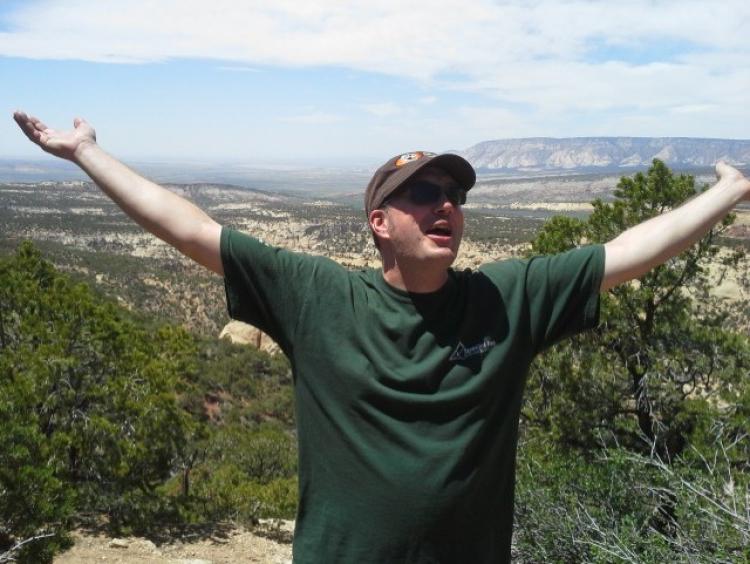 In 2015, Matt Jensen witnessed two long-time Vista Village residents lose their homes. Jensen's two elderly neighbors could no longer care for themselves and had planned to sell their homes to cover living in an assisted-living facility, he says.

Instead, the manufactured home park's owner found a loophole in the US Department of Housing and Urban Development's (HUD) housing laws, allowing the corporation to forbid sales of Vista Village's pre-1976 manufactured homes and to require residents of those older homes to pay to remove their units. As in most manufactured home parks, Vista Village residents own their homes, but rent the land beneath them, and employees of the park's ownership manage the land. Although the two residents' homes were older, Jensen says they had been remodeled and maintained, and had passed housing inspections.

Refusing to let the homeowners sell their homes was a movement towards gentrifying the park, Jensen says.

"Those homes were the senior's biggest assets," he says. "I witnessed elderly women who became homeless because of this. I don’t know what became of them.  That was beyond the pale for me."

Soon after, one of the park's residents formed a residents' group. A year later, the organization transitioned to a nonprofit association registered with the state of Colorado, now called the Vista Village Community Association. Jensen has been a member of the association's board of directors for five years, including three of those years as president.

He has lived in Vista Village since 2003, choosing the manufactured home park because of its affordability.

"Boulder was, and still is, very expensive, and I wanted to stay in Boulder, " says Jensen.  "Vista Village is a really nice place, surrounded by parks, which is a wonderful thing."

What do you feel are the most pressing issues for residents?
The residents have issues with the management around park upkeep, such as tree branches hanging over their homes, where high winds and heavy snow could break the branches and damage those homes, and sewers not being maintained and backing up into homes. There also has not been much transparency on how utilities, like water, are being billed. The park's streets are in OK condition, but they used to pave the streets every five to six years.  It's now been seven years since they paved them.

The other issue is the skyrocketing rent. Sometimes the annual rent increases are manageable; sometimes they are much higher. When the cost of living goes up, people get displaced. With the pandemic, rising rents are certainly something we are keeping an eye on because even though there's a moratorium on evictions, people are still struggling. Rent stabilization is one of my personal core missions. I really, really wish we could make more headway on rent stabilization so rent is not continually rising. It makes it increasingly difficult for residents of modest means.

The only two solutions that I can see is that something needs to be done to control the housing costs or people need to make more money so they can afford it.

I try to keep the viewpoint that the owners have plenty of overhead expenses, but there is not much transparency. The owners are not willing to talk to us.

What are some of the accomplishments of the association?
Our association's mission is to "unite the community through social connections, mutual support, education and advocacy for our homeowners' rights."

A big part of what we do is organize events to bring the community together, like barbecues and pancake breakfasts.

But sometimes people have issues with the owners and management, and we’ll advocate to the best of our abilities for the homeowners' rights. I view the association as trying to work with ownership and management. As well as working on conflict, we also work on trying to work together.

A lot of our accomplishments can be found in the ordinances of the city of Boulder's Manufactured Housing Strategy, which is something we helped put in place. I feel really good about the progress we made with the city and state. Boulder's city council has been very supportive of us and acts as a mediator between the residents and park management. The council passed at least three ordinances in the last three to four years that are helpful to residents. We're working on the latest ordinance, which involves city laws in regards to home sales.

During the 1980's the "Mobile Home Parks Act," was the sole state law for manufactured home parks. Before we started organizing, manufactured housing rights were very weak, and there were little protections for manufactured home owners.  A lot of the residents are low income. They can’t afford lawyers. They don’t have a way to represent themselves. A lot of these people are not English speakers. The new state law was a big accomplishment for us because there is now a way to file complaints with the state to help resolve disputes between park owners and residents. There is also a new department that specifically deals with manufactured housing on the state level.

What are some tips for residents who want to form a manufactured home association?
It starts with neighbors talking to neighbors and having those "over-the-fence" types of conversations, then finding a common purpose and cause.

Also work with your city council and let them know what your association is working on and the issues it's dealing with. Then see what your elected representatives can do to represent your residents.

Do you have any insights for people who want to step into a more formal leadership role?
You can't always help, but when you can help, it’s a wonderful thing. When residents feel like we have helped them, that really gets them involved. They end up participating in meetings and contacting us more often. It goes from there.