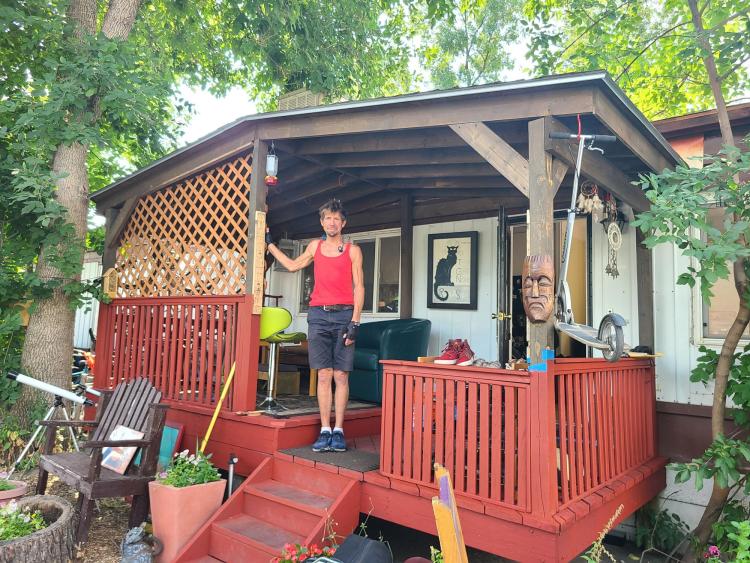 An inequitable pandemic
In the middle of March 2020, Colorado Gov. Jared Polis issued a stay-at-home order to slow the pandemic, and like many small business owners, Dave Weil was caught in the middle. Weil closed his thriving massage therapy business; by July he was still only seeing a few clients each week.

"It's not enough to get by in Boulder," says Weil who lives in Mapleton Mobile Home Park in Boulder, Colorado. He now attends community food drops offered in the mobile home park, and he's mostly cooking at home.

Because he has some savings and because living at Mapleton, which is cooperately owned, is "semi-affordable," he will be OK for the immediate future. That said, his planned renovation project will go on hold if his savings continue to be depleted.

Weil says many park residents are struggling from lost income due to COVID-19, including a printer, a teacher, a salesperson and a few restaurant workers.The uniformly spaced units allow for isolation of individuals. Residents wear masks and keep socially distanced when gathering for meetings or food drops, which are held outside. That said, most Mapleton residents fall in the 50 to 70-year-old age range, with a few residents in their 80s, and because of their succeptibility to COVID-19, they have reduced contact with neighbors and the outside community.

"I have a credo that it's better to not know too much about your neighbors," he says. "We are so close together here, practically sharing walls, that it's better we keep things on a polite level and not get too initimate with details."

An affordable alternative
Weil says choosing Mapleton was a "no-brainer."  Before moving to the trailer park, rent for his Boulder apartment teetered on 50 percent of his income as a massage therapist with a busy practice.  When he moved to Mapleton, he paid $9,000 for the structure that would become his home at a time when the average house price in Boulder topped $225,000. Today the average home sale price in Boulder is $1.1 million.

"If I hadn't had the option of living in a manufactured home, I would have had to move out of Boulder," he says.

He ticks off Mapleton's advantages over other area mobile home parks. Mapleton is a six-minute walk to the center of town, and he lives in a quiet cul-de-sac. Lot rentals are less expensive than other Boulder parks, and Mapleton has a more democratic governance, he says. When he moved in, the city of Boulder owned the park, but soon after it was sold to Thistle Community Housing, a nonprofit organization which develops, manages and preserves permanently affordable rental and ownership homes in Boulder County. He credits Thistle, which operates as his landlord, in authoring the park's democratic structure.

"We have a micro-paradise here because we control land-use values within the park, which means outside parties can't decide what happens with our homes or with the land around our homes," he says. "That's a major advantage over the mobile home communities within Boulder owned by outside entitites who don't have an interest in quality-of-life issues or length of residency or land-use values. We vote on any change or improvement that happens within the park. Everyone gets a vote."

Mapleton is also one of the more ethnically diverse communities in Boulder, Weil says. He estimates that 50 percent of the residents are Latino or other minorities and about 40 percent are age 65 and older. He estimates only one in five households has an intact nuclear family.

Within the park there is a sense of community. Before COVID-19 there were regular gatherings, as well as community yard sales and clean ups. Residents tend to purchase sustainable materials for their projects, and the community recycles, including electronics, and composts. There is a community garden, and Weil's yard is a huge network of raised beds and individual containers. The park maintains the trees within, which he says has been great for the wildlife and the city as a whole.

"There is no good reason to leave Mapleton," Weil says.

Legislation to make things better
Unlike other local mobile home parks, Mapleton's lease includes a mandate that only allows a 1 to 2 percent annual rent increase, and Mapleton is also a community land trust, meaning the community is owned by the residents. But similar to other Colorado parks, none of Mapleton's residents own the land beneath their units and state law favors out-of-state corporate ownership of trailer parks over local or individual ownership.

Some states have inacted laws allowing residents to purchase the land beneath their trailers after they have lived there one or two years, but that hasn't been the case in Colorado, where the majority of parks are owned by out-of-state corporations and holding companies, each of which may own as many as 100 different parks across the country. Weil says these corporations have no interest in helping healthy communities develop in their parks.  An example is Sans Souci Mobile Home Park in unincorporated Boulder County, where an out-of-state corporate owner has imposed steep rent hikes and mandated unwanted landscape changes to residents' property, he says.

"I believe very strongly that laws needs to change to favor individual ownership so that people can build equity in their homes," Weil says. "You could live in the same home for 20 or 25 years and spend over $100,000 on lot rentals during that period, and the amount of equity you gain is exactly zero. In fact, if you live in your home long enough you end up with a liability because you have to pay to have that home demolished and hauled away, and you are no closer to getting a replacement home."

Voices: Dave Weil (Part I) Rehabilitation of an aging structure