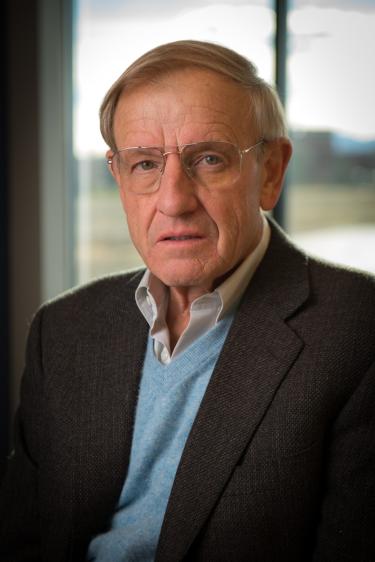 Professor Caruthers' interests include nucleic acid chemistry and biochemistry. Approximately 30 years ago, the methodologies that are currently used for chemically synthesizing DNA were developed in this laboratory (Fig. 1). These procedures have been incorporated into so-called "gene machines" for the purpose of synthesizing DNA that is used by biochemists, biologists, molecular biologists and biophysical chemists for various research applications. More recently, in a collaboration with Agilent Laboratories, this procedure has been adapted for use with modified ink jet printers in order to synthesize DNA on glass chips. Using this modified chemistry, Agilent has developed instruments that synthesize the equivalent of the human genome each day (DNA 300 nucleotides in length, 3 billion base pairs, 6 billion coupling reactions). Currently underway in the Caruthers' laboratory are investigations desinged to imporve the chemistry further so that we can chemically generate DNA 600-900 nucleotides in length.

The group's interest also focuses on the synthesis of new DNA/RNA analogs (Fig 2) followed by in depth analyses on the use of these derivatives for biology and nanotechnology applications. For example,  ethynylphosphate DNA reacts with azides to generate triazoylphosphonate analogs. Triazoylphosphonate DNA and peptide/amino acid substituted triazoylphosphonate DNA under go rapid transfection into various cell lines (HeLa, WM-239A, Jurkat, and SK-N-F1) and exhibit biological activity as an antimer in a dual luciferase assay. Similar results were obtained with boranephosphonate DNA.

We continue to develop new analogs with several presented in Figure 2. Many of these are expected to find application in biochemistry, human diagnostics, biology, and nanotechnology.