Although sandstone walls might look solid, they can be riddled with their residents’ long-lasting residue

Sandstone that forms on the bottom of a sea has precisely defined, parallel layers, while cross-bedded sandstones are fossilized sand dunes. Chinle, Wingate, Kayenta and Entrada sandstones, formed in the Triassic and Jurassic Epochs between 225 and 140 million years ago, are the sandstone layers found in the McInnis Canyons National Conservation Area.

Entrada sandstone was formed between 180 and 140 million years ago as windblown sand dunes beside the Sundance Sea, which came to western North America as five separate intrusions of the Arctic Ocean.  Today, wind and water erosion are the sculptors that create rock art in the form of pinnacles, arches, bridges, slot canyons and alcoves with hanging gardens. 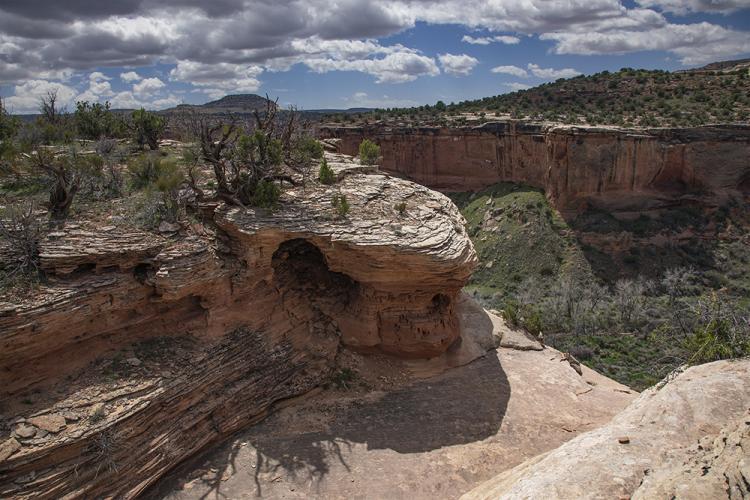 At the top of the page: Debris and amberat spilling from caves identify packrat dens (Photos by Jeff Mitton). Above: Photo taken from above the stream showing the extent of the cave openings, the dryfall and McDonald Canyon.

During a recent hike along the eastern rim of McDonald Canyon in the McInnis Canyons National Conservation area, I enjoyed the sinuous forms cut by ephemeral streams into large expanses of slickrock. These ended abruptly as dryfalls that become waterfalls after rains.

A particularly large and dramatic entrenched ephemeral stream is near the southern end of the McDonald Canyon. The stream cut deeper and deeper until the stream  banks were about 12 vertical feet.

Near the dryfall, the stream bank had six openings, and each was stuffed with twigs of all sizes and finer debris.  Distinct drops of fluid, the color of tea, stained several of openings. Piles of plant debris and dribbles of dark fluid are certain evidence of a packrat or woodrat den.

The six openings, extending across 20 feet of stream bank, might have revealed multiple unconnected dens, but I have the hunch that all were part of a large, winding cave, occupied by a single packrat, or perhaps an adult female raising offspring.

Packrat dens are common in canyon country, but this one occupied especially attractive sandstone. It has finely striated pink and white sedimentary layers and erosion has shaped the layers into steps and shelves.

On both sides of the opening to the den, water had fashioned labyrinthine columns. I smiled, thinking that this packrat had a refined sense of aesthetics.

The banks of the entrenched stream are in Entrada Sandstone, while the streambed has a different color, for it is Wingate Sandstone.

Packrats arose and diversified in the Pleistocene Epoch, from 2.6 million to 11,700 years ago. About 21 species are in the Genus Neotoma, and four currently occupy the Colorado Plateau: bushy-tailed, desert, whitethroat and Mexican.

I suspect that this den was occupied by bushy-tailed packrats, Neotoma cinerea, for they are most common. Their weight can be as much as 0.75 pounds and their total length is up to 16 inches, but almost half of that is tail. 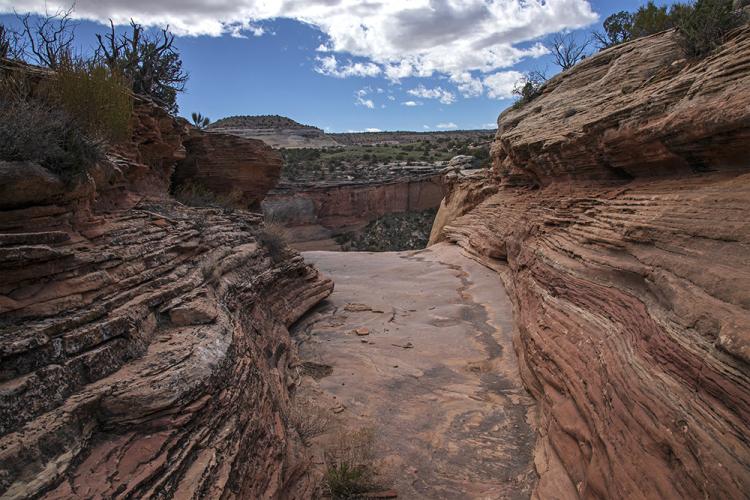 This photo shows the banks are Entrada sandstone and the stream bed is Wingate sandstone.

Packrats are herbivores, eating a wide diversity of things, even conifer needles. On the Colorado Plateau, they frequently inhabit crevices and caves eroded by water in sandstone. A den is usually occupied by a single packrat, or an adult female and her offspring. They make a warm nest of soft plant material and they also accumulate a pile of materials, a midden, that they have collected from their territories.

They urinate on the midden, and in the fullness of time, the urine indurates or hardens, encasing the entire collection into a glassy amber mass called amberat. Sealed from oxygen, water and movement, these materials may be nicely preserved for up to 50,000 years. The amberat, which is essentially crystallized urine, dissolves easily in water. When water leaks into a cave, dissolved amberat dribbles from the cave openings, leaving an amber stain on canyon walls.

Because packrats collect all manner of materials, such as pine cones, seeds, leaves, berries, bones and teeth, middens have served as time capsules for ecologists and biogeographers. When biologists dissect a midden, they cut amberat disks an inch thick and a foot in diameter and wrap and label each one.

Each disk is carbon dated to determine when packrats collected the contents. Then they identify as many of the preserved contents as possible. This information can be used to describe where a species lived 25,000 years ago, or where it migrated as glaciers moved across the landscape.

Evolutionary geneticists are now using midden materials to describe how a species changed over time, identifying which genes responded to climate change or evolved as the species migrated and adapted to new environments. In addition, viral and bacterial species can be identified and studied from ancient DNA in the amberat disks.

I enjoy finding packrat dens by looking for twigs and other debris spilling from openings and amber stains on canyon walls. These telltale signs serve as a reminder that although sandstone walls look solid, they may be riddled with passages formed by water and occupied by packrats peeing on time capsules. 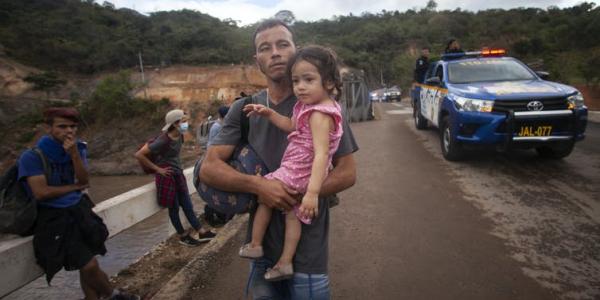 Climate change and other environmental stresses have increasingly become drivers of displacement, Climate change is... END_OF_DOCUMENT_TOKEN_TO_BE_REPLACED 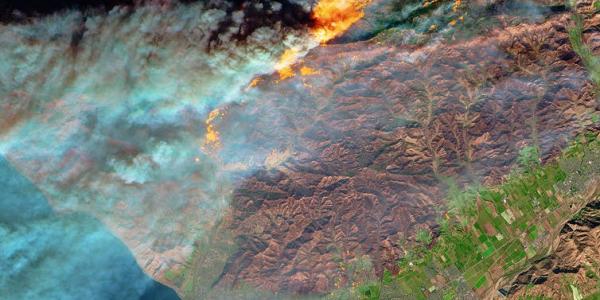 Record-breaking fires over the past decade suggest the western U.S. has entered a new era... END_OF_DOCUMENT_TOKEN_TO_BE_REPLACED

Faith leaders are coming up with new ways to reach their communities, with many turning to online platforms to perform rituals. END_OF_DOCUMENT_TOKEN_TO_BE_REPLACED
Categories:
Tags:
Return to the top of the page