In August it is a joy to revel in fields full of colorful wildflowers. Crested Butte is the undisputed wildflower capital of Colorado, but Colorado has numerous fine places where the wildflowers are rated between mesmerizing and overwhelming.

Meadow Creek Lake is one of these. Near 10,000 feet on the White River Plateau, the lake is surrounded by rolling meadows packed with wildflowers and in summer the abundance of both pollen and nectar attracts healthy populations of bees, beetles and butterflies. During my last visit, ruddy copper butterflies were so focused on the nectar provided by asters that they could be approached and observed closely.

Ruddy copper butterflies, Lycaena rubidus, are sexually dimorphic for color and pattern. On the dorsal sides of their wings, males are brilliant red-orange with black spots, a narrow black band on the wing margins, and minute scales forming a white fringe. 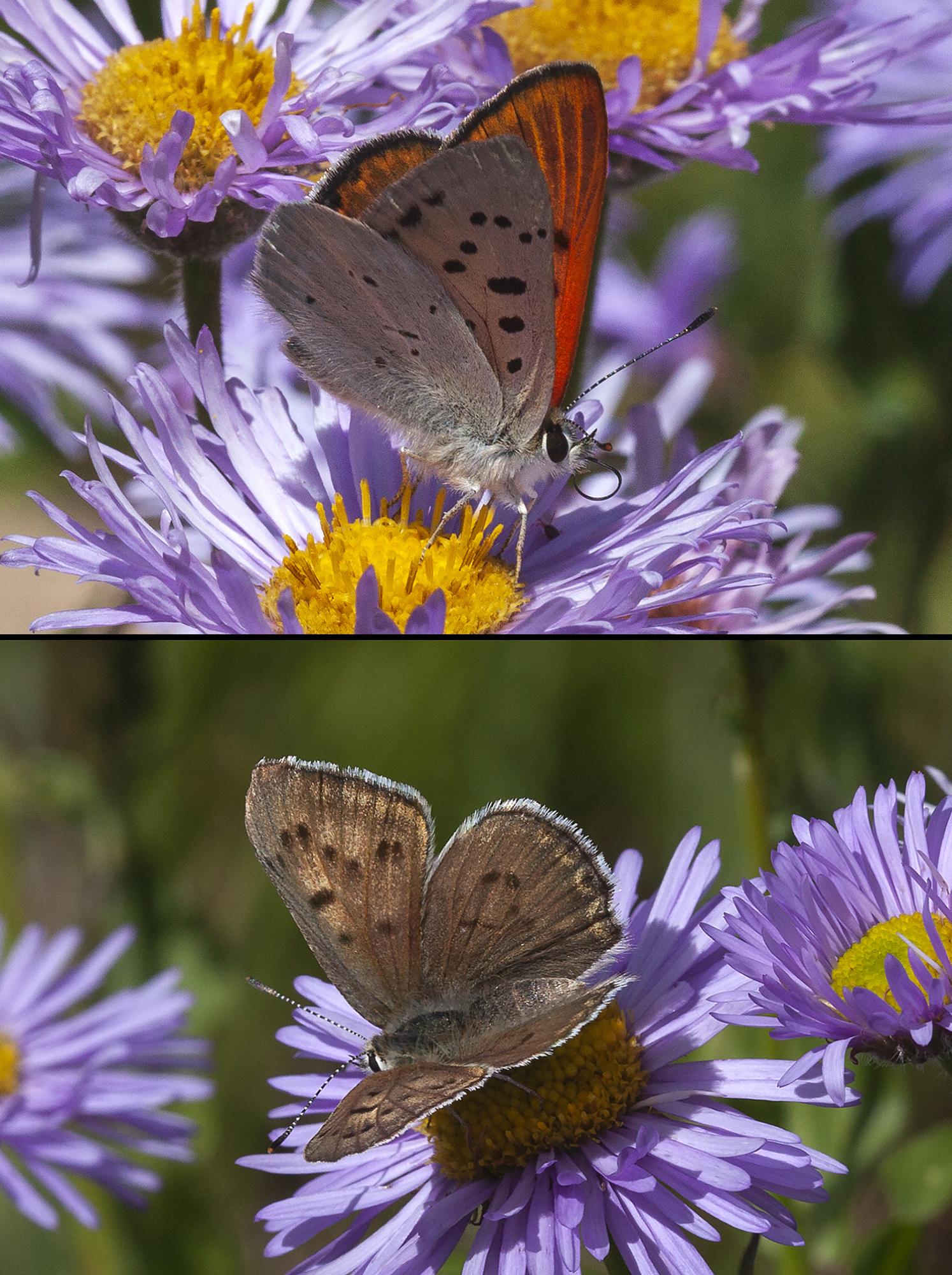 A male ruddy copper above and female below, illustrating the sexual dimorphism for color. Photos by Jeff Mitton

Females, by comparison, are subdued and cryptic. In addition to the black and white at the margins, faint yellow-orange chevrons join to form a wavy line and the dorsal background colors are tan to brown with black spots. The dorsal colors are so different between the genders that, at first, I did not appreciate that they were the same species.

Male and female dorsal color patterns have been shaped by different selective forces. The males are bright to attract females searching for a mate. In sexually dimorphic species in which males are bright and females are cryptic, females often use color intensity to estimate male health and endurance and they choose the most colorful as mates.

Colorful males are more apparent to visually hunting predators, but on the other hand, males that live long lives without mating are abject failures from the perspective of natural selection. All males die, but the most successful are those leaving the greatest number of offspring. Females are cryptically colored to avoid predation—the world is full of males eager to mate, but they need to avoid predation for as long as possible to develop eggs and deposit them in optimal sites.

Wouldn't it be intriguing if ruddy coppers had also evolved sexual dimorphism for vision, given that they search for targets that are so different?

Someone noticed that eye shine was sexually dimorphic in ruddy coppers. Eye shine is a reflection from tissues in the eye—males reflect a predominantly yellow hue from the dorsal portion of the eye, while females reflect a greater range of colors. This was one of the cues that led people to investigate opsins (photosensitive pigments) in ruddy coppers.

The ancestral condition for the eyes of butterflies and moths, and the present condition in sphingid moths, painted ladies and monarchs, is three opsins with maximum sensitivities at wavelengths of 350 mm (UV range), 440 mm (blue) and 530 (blue-green).

Ruddy coppers are in the family Lycaenidae, one of the two most recently evolved butterfly families, containing about 4,000 species. But ruddy copper has not three opsins, but four. Analysis of DNA sequences of the opsin genes revealed that the gene for the blue opsin (440 mm) had duplicated.

This duplication occurred as the family arose, for it is common to most or all species in Lycaenidae but not found in any other butterfly families. After duplication, the original gene evolved to 437 mm (indigo-blue) while the new copy evolved to 500 mm (blue-green). In addition, the long wavelength opsin evolved from 530 mm to 568 mm (green-yellow).

The opsin with maximum sensitivity at 568 mm has a broad curve, so that is has function at 630 mm, which is orange, the hue of male ruddy coppers.  Gene duplication and subsequent evolution of the opsins provided much better color vision in the blue range and extended color vision into the orange range.

Females, but not males, express the 568 mm opsin in the dorsal portions of their eyes. Consequently, females are better able to detect the ruddy copper hues of males and to judge which male is most brightly colored.

It seems that reproductive success and sexual dimorphisms for dorsal color and for vision are inexorably interdependent in ruddy copper butterflies. 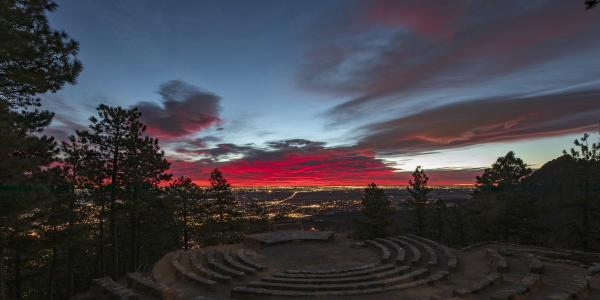 My viewing of winter solstice dawn was quiet, but I had the conviction that this sort of observation reached far back into history, all around the world. END_OF_DOCUMENT_TOKEN_TO_BE_REPLACED

Why did that one tree die? An expert is on the case. END_OF_DOCUMENT_TOKEN_TO_BE_REPLACED 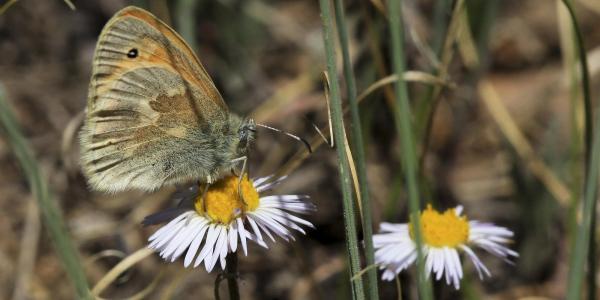 A minimum of 21 subspecies have been described, usually geographically separated but sometimes with geographic... END_OF_DOCUMENT_TOKEN_TO_BE_REPLACED
Categories:
Tags:
Return to the top of the page