I camped at Teal Lake in the Park Range to photograph fall colors, but I also enjoyed the ospreys that were hunting trout and the numerous leopard frogs at the lakeshore. Teal Lake is like many other lakes, ponds and marshes in that the leopard frogs, Rana pipiens (or Lithobates pipiens), come in two colors, brown or green. This color polymorphism is found throughout the range of the species, from Hudson Bay to the Southwest, and from eastern California through the upper Midwest to New England. The persistence of two colors everywhere suggests a balance of evolutionary forces and raises the question: Does it make any difference whether a leopard frog is brown or green? Phrased another way, are brown and green frogs adapted to different environments, or circumstances?

Brown and green do not show simple patterns from north to south, or from east to west, or with elevation, or with habitat."

Color in leopard frogs is determined by a gene that has two forms, or alleles, G and g. Each frog has two alleles, and frogs with genotypes GG or Gg are green, while gg frogs are brown. 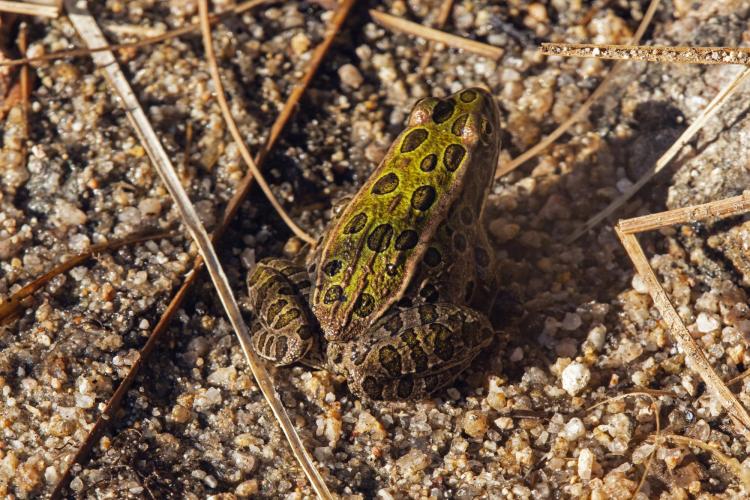 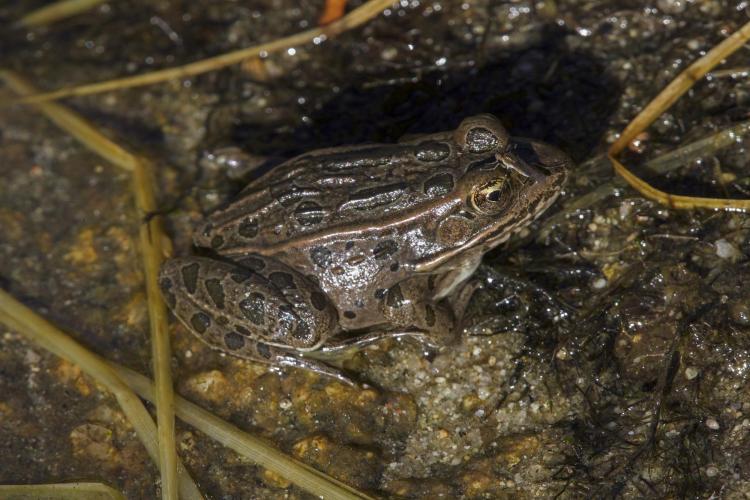 Many subspecies of leopard frogs have been described, and in general subspecies that are geographically close are able to hybridize. However, as crosses between more geographically distant subspecies were performed, reproductive success dropped to zero, indicating that they were reproductively isolated. This pattern of mating success is indicative of local adaptation of populations, so that frogs from similar and nearby habitats are able to hybridize, but frogs from very different environments, such as New Mexico and Vermont, perform as distinct species, unable to produce hybrid offspring.

Paul Stephen Corn, for his PhD thesis research at Colorado State University, tested the hypothesis that developmental rates differed between brown and green frogs. He compared data from Larimer County, where populations contained from 24% to 68% brown frogs. He studied developmental rate in two ponds, Prairie Divide (30% brown) and Red Mountain (68% brown) by measuring the time from mating to the time a frog was metamorphosing from a tadpole to a frog. He then compared developmental rates of brown and green frogs in both ponds. In Prairie Divide Pond, he saw a tendency for brown frogs to develop faster, but the results were not quite statistically significant. In contrast, brown frogs developed much faster than green frogs in Red Mountain Pond and this result was highly significant.

Why did these ponds have such disparate frequencies of colors, and why did developmental rates differ in one pond, but not in the other? These data were difficult to interpret until Corn considered two additional observations. First, developmental time was 16 days shorter at Red Mountain, where brown frogs developed faster than green. Second, in the data for Larimer County, brown frogs were more common in ponds with either trout or tiger salamanders, but green frogs were more common in ponds without predators.

If brown frogs have such an advantage, why aren’t all frogs brown? Green frogs must have an advantage in some environments, or in some circumstances. In places without vertebrate predators, the frogs dawdle through development and in these ponds I suspect that green frogs will reach slighter greater size because they have a tendency to develop slower. Larger frogs would produce more eggs and therefore have a fecundity advantage. In the six ponds in Larimer County, green frogs predominate in the absence of predators and brown frogs predominate where predators consume frog tadpoles. Note that the advantage of green frogs in environments without predators is my hypothesis—it needs to be tested experimentally.

At Teal Lake, which has a healthy population of trout, brown frogs are more common than green. Now we know why. 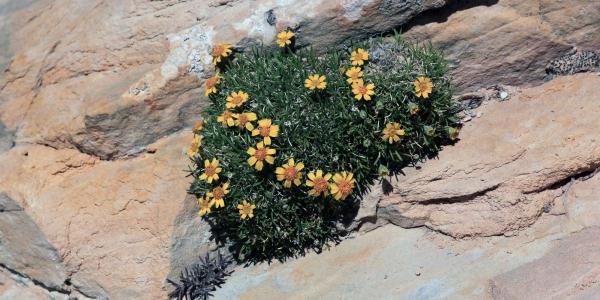 From the caliche soils of southeastern Colorado to crevices in bare sandstone on the Colorado Plateau, stemless four-nerved daisies show remarkable variation in growth form END_OF_DOCUMENT_TOKEN_TO_BE_REPLACED

The world is full of robber flies—approximately 7,000 species have been recognized worldwide and 1,000 are native to North America END_OF_DOCUMENT_TOKEN_TO_BE_REPLACED 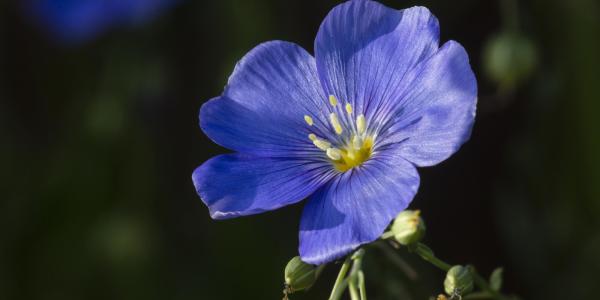 Understanding genetic diversity in a species is especially important for conservation and restoration efforts END_OF_DOCUMENT_TOKEN_TO_BE_REPLACED
Categories:
Tags:
Return to the top of the page