The Chautauqua Meadow put on a memorable display of wildflowers in late June and early July of this year, so I walked there several times just to enjoy the flowers, as did many others. Lupines were the most prominent and could be seen from Baseline Road, but if you walked along the trails you saw that sego lilies, flax, and mountain parsley were abundant as well. Although not prominent, western wild roses or mountain roses, Rosa woodsii, were particularly handsome.

Mountain roses have an enormous geographic distribution, from Alaska to the Atlantic shores in Canada and through all of the western states into Mexico. Within Colorado, they are distributed from 3,800 to 11,700 feet. Throughout their range they grow as bushy perennial shrubs that vary from less than two feet to about nine feet tall. Along streams in full sun they form dense thickets.

Roses have been here a long time, for the oldest fossil, approximately 55 million years old, was found in the Florissant Fossil Beds in Florissant, Colorado."

Roses have been here a long time, for the oldest fossil, approximately 55 million years old, was found in the Florissant Fossil Beds in Florissant, Colorado. In addition to mountain rose, prickly rose, Rosa acicularis, and prairie rose, Rosa arkansana, are native to Colorado. More than 20 species of Rosa are native to North America.

Given their vast geographic and elevational ranges, mountain roses are quite variable. Consequently, about five subspecies are currently recognized, but these are currently being revised and a consensus has not been reached. Petal color is one of many characters that vary geographically. Although most photos of mountain roses show light to deep pink petals, the bloom that I photographed had bright pink stippling on a very light pink, almost cream background. I note that photos of stippled petals can be found on the web and they are from the plains of Colorado and technically, the Chautauqua Meadow is the very margin of the plains. 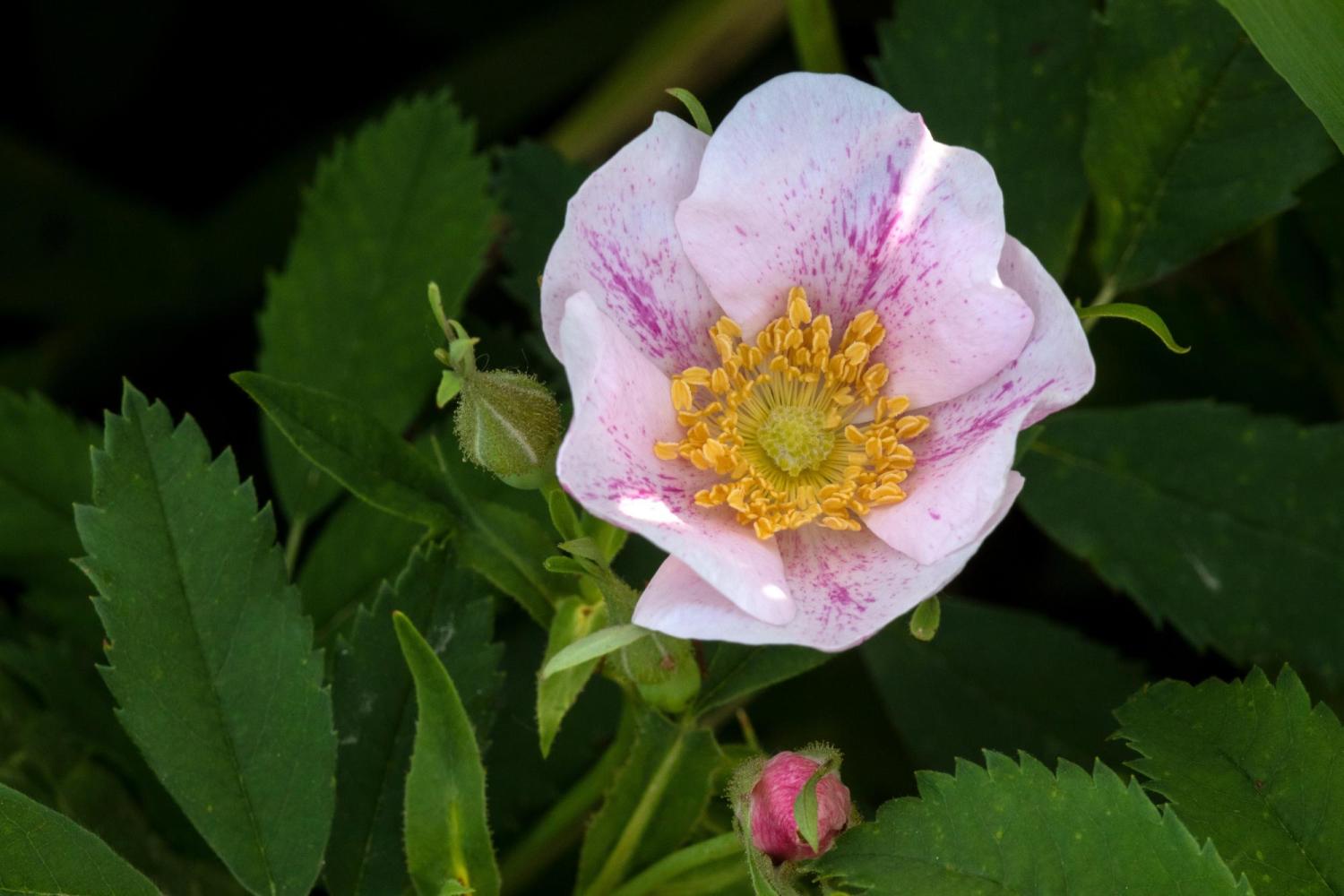 Wild roses add their color and fragrance to meadows and forests. Photo by Jeff Mitton.

Mountain rose blossoms have five petals that form a cup about two inches across. They have numerous pale yellow stamens (male structures) forming a fence and partial canopy over 20 to 35 pale green pistils (female structures). The blooms are short-lived, a day to a few days at best, and the bushes bloom just once per year. These bright, conspicuous flowers attract a great variety of pollinators, including honeybees, bumble bees, beetles and flies.

Fertile seeds develop in rose hips, bright red fruits that can be mushy or crisp and sweet, depending on the ripening conditions, though they become sweeter after a few frosts. Rose hips attract birds and small mammals which then disperse the seeds. Rose hips can also be dispersed by water, for occasionally rose hips drop into streams.

Modern laboratory studies have reported that rose hips have both antibacterial and antimicrobial activities, are high in vitamins C and E, and contain the carotenoids beta-carotene, lutein, zeaxanthin and lycopene. All of these things support health and some support healing. But people knew this long before chemists donned white lab coats. All Native American tribes in the Four Corners Area collected rose hips when they were available and either ate them immediately as snacks or mashed them, dried them in the sun and stored them for consumption in winter. Rose hips could be brewed to make tea or syrup that was used to treat respiratory ailments, and after the rose hips were used to brew tea, the remains were used in jellies, soups, stews and puddings.  Roots could be brewed to make a tea that was used to remedy colds.

Five thousand years ago roses were cultivated in China, Western Asia and Northern Africa. They were introduced to Europe in the 14th century and today 30,000 to 35,000 varieties are recognized. But that is a complex story of hybridization, a column for another time.

I enjoy roses, and have more than a dozen varieties in my yard. But I am always pleased by the discovery of a blooming wild rose in a meadow, or among the ponderosa pines, or beneath a canopy of quaking aspen.

An amplectic pair of treehoppers, Telamona monticola, was on a CU sidewalk beneath a swamp oak tree, Quercus bicolor. I surmised that they tumbled from the tree while delicately adjusting their positions. I collected the treehoppers to photograph them and 7 hours later they were still amplectic. END_OF_DOCUMENT_TOKEN_TO_BE_REPLACED

Two factors suggested that this spring and summer would witness extraordinary blooms of wildflowers on... END_OF_DOCUMENT_TOKEN_TO_BE_REPLACED

Pinedrops parasitizes the mycorrhizal fungus directly, stealing water, minerals, carbohydrates and nutrients, but supplying nothing in return. In effect, it parasitizes a mutualism after germinating in the grasp of a fungus. END_OF_DOCUMENT_TOKEN_TO_BE_REPLACED
Categories:
Tags:
Return to the top of the page