Not all users of public lands are good neighbors

As I approached Engineer Pass from the east, I was distracted by a herd of domestic sheep grazing above tree line. Two hours later, at Odom Point on the west side of the pass, I saw another herd of sheep. From Odom Point looking west, I was astounded to see that the hillsides, as far as my binoculars could discern, had latticeworks of sheep grazing trails—the sheep had literally pounded paths into scree slopes, or hillsides of loose rock. 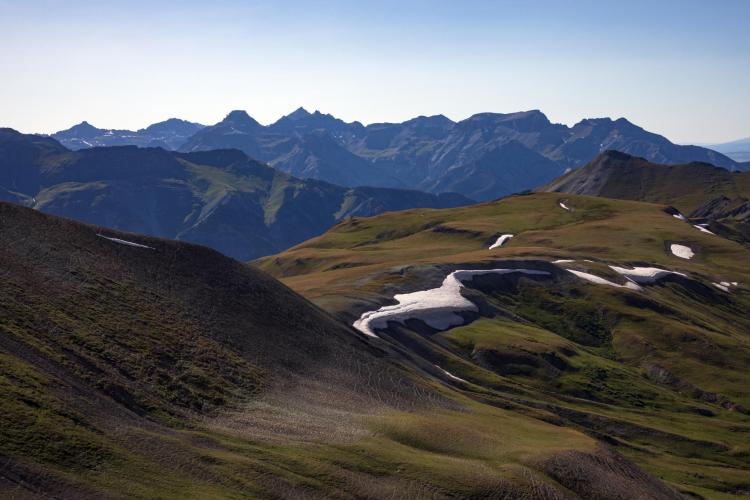 Sheep grazing trails have been pounded into alpine hillsides along the Alpine Loop in the San Juan Mountains. Click here or on photo to see larger image. Photos by Jeff Mitton.

In 2014, I drove from Dotsero up Coffeepot Road to camp at Deep Lake on the White River Plateau. Coffee Pot Road goes through Crane Park, which was chest deep in wildflowers. Wildflower abundance and diversity was so great that I returned the next two days to explore and photograph them. I returned to the Plateau in 2017 and 2018 to enjoy the experience again, but both times I found a shepherd and several sheep dogs managing a herd of more that 1,000 sheep. Both times, the wildflower displays were greatly disappointing, nothing like the stunning display of 2014.

The vast majority of people who visit the Uncompahgre and White River Plateaus and the Alpine Loop are not ranchers, but citizens who want to see and experience wilderness, to hike, ride horses, camp, fish and hunt in undisturbed landscapes."

In 2018 the shepherd parked his trailer and his herd at a small pond in Crane Park--they did not move for the three days that I camped nearby. The sheep mowed down the vegetation and trampled the edge of the pond until it was a wide swath of mud. I had been at this pond four years earlier, when it was occupied by a great blue heron and ringed with wildflowers, some taller than me.

Public lands are intended to be multiple-use, to serve people with many interests. That sounds good, and I enjoy sharing public lands with fishermen, birders, hikers, bicyclists, photographers, campers, hikers, horseback riders and climbers. But not all users are good neighbors. Fly fishers have certainly learned that they cannot share a trout stream with miners and no one wants to camp in a logging operation or an overgrazed pasture. Some users exclude all others.

In 2017, I saw the shepherd sitting with his dogs in a sea of wool, enjoying the late afternoon sun. I set up my tripod and camera to photograph the scene from a thousand feet away, but he saw me and sicced his biggest dog on me. I escaped by seeking shelter in my vehicle. The next year the same dog came after me again. Later that day I confronted the shepherd and he said “We pay to be here.” To summarize a long and heated exchange, he believed that his outfit had paid for the exclusive use of the Plateau.

Grazing allotments on public lands are managed primarily by the Bureau of Land Management (BLM) and the United States Department of Agriculture Forest Service (USDAFS). A rancher can get a grazing permit for either cows or sheep, and costs are determined by the number of animals and the amount of time. The cost of grazing one cow for one month (an animal unit month, AUM) is $1.35. Five sheep are considered equivalent to one cow, so a permit for a sheep for a month costs 27 pennies. Can you feed a canary or a hamster for 27 cents per month? If a rancher wanted to graze a sheep on private land, the going rate is $4.30 for a sheep, or 16 times the cost of a grazing permit. Grazing permits amount to a public subsidy of cattle production that benefits only 2% of ranchers.

I have seen herds of sheep as small as several hundred and as large as several thousand in the Bighorn Mountains, on the Alpine Loop in the San Juan Mountains, Blue Mesa and the Uncompahgre and White River Plateaus. I have walked in the wake of immense sheep herds and found that much of the grasses and forbs were gone, eaten or trampled, and hillsides had fresh grazing paths of bare dirt. In comparison to ungrazed alpine sites, the esthetics of a grazed site are degraded.

Ranchers graze their sheep on public lands to make money—grazing permits allow them to feed their cattle for nearly nothing. The vast majority of people who visit the Uncompahgre and White River Plateaus and the Alpine Loop are not ranchers, but citizens who want to see and experience wilderness, to hike, ride horses, camp, fish and hunt in undisturbed landscapes. Grazing permits are administered, unapologetically, for the benefit of ranchers, but unwittingly to the detriment of the lands and the majority of users.

An amplectic pair of treehoppers, Telamona monticola, was on a CU sidewalk beneath a swamp oak tree, Quercus bicolor. I surmised that they tumbled from the tree while delicately adjusting their positions. I collected the treehoppers to photograph them and 7 hours later they were still amplectic. END_OF_DOCUMENT_TOKEN_TO_BE_REPLACED

Two factors suggested that this spring and summer would witness extraordinary blooms of wildflowers on... END_OF_DOCUMENT_TOKEN_TO_BE_REPLACED

Pinedrops parasitizes the mycorrhizal fungus directly, stealing water, minerals, carbohydrates and nutrients, but supplying nothing in return. In effect, it parasitizes a mutualism after germinating in the grasp of a fungus. END_OF_DOCUMENT_TOKEN_TO_BE_REPLACED
Categories:
Tags:
Return to the top of the page